Cycling Sign at Benjakiti Park/Courtesy of Kelly Iverson
If you look hard enough, you will discover that not all major cities consist of just traffic and concrete alone. In fact, many of these urban areas offer great routes for cyclists. Whether it is weaving streets through an ancient city of ruins or a concrete path with skyscrapers acting as your backdrop, here are the best cycling routes in Bangkok.

Often referred to as ‘Bangkok’s Green Lung’ is Bang Kachao, a green, almost island-like oasis. Bang Kachao received this nickname for two reasons: one being its unusual shape, the other being that ditching downtown Bangkok for a visit is a good way to escape the polluted, smog-ridden city.

Just six miles away from Bang Kachao is downtown Bangkok, but one would hardly notice the city’s close proximity due to Bang Kachao’s papaya groves and coconut trees growing on either sides of some of the best cycling paths in the city. Tourists are scarce, and the cycling paths weave you through small villages with wooden homes balancing on stilts. None of the paths have guardrails, but they are big enough to cycle on, depending on how comfortable you are on a bicycle. You can explore Bang Kachao in its entirety by bicycle for only ฿100 (about $3) a day. 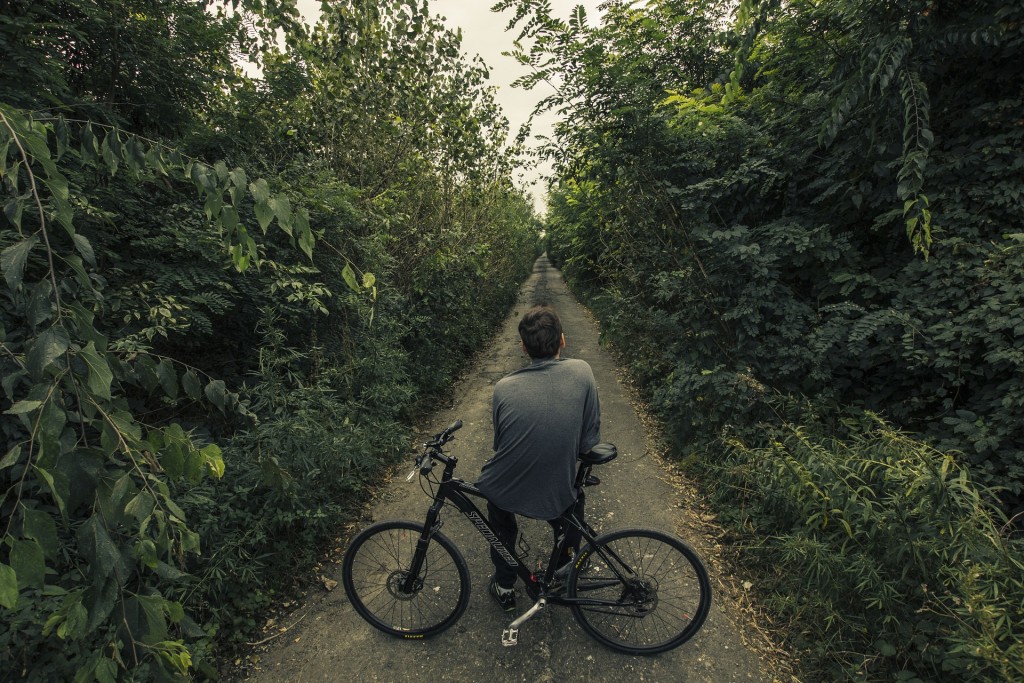 Park
Bike trail at Benjakiti Park | Courtesy of Kelly Iverson
One just might be able to block out the distant sound of cars while cycling through Benjakiti Park. With a large lake acting as its centerpiece, it is easy to forget you are in one of the busiest cities in the world. Cyclists can be at ease knowing that there is a path specifically for bicycles; pedestrians without bicycles have their own walkway as well. While the walkway stays close to the pond, the cycling path weaves in and out of an array of trees, making it mostly shaded. This is a perfect way to cycle around Bangkok, as the weather here, regardless of the outdoor activity, can be brutal.

Benjakiti Park is also very easy to access. Off the BTS Skytrain stop Asok, cyclists only have to walk about five minutes in order to reach their destination. For those of you who are not cycling, feel free to rent a swan paddleboat to explore the park via water or enjoy one of the many amenities the park has to offer, including a skate ramp.
More Info
Open In Google Maps
Ratchadaphisek Road, Khwaeng Khlong Toei, Khet Khlong Toei Krung Thep Maha Nakhon, 10110, Thailand
+6622541263
View menu
Visit website
Visit Facebook page
Send an Email
Give us feedback

Park
Watch a sepak takraw showdown at Lumpini Park | © Tuomas Lehtinen / Alamy Stock Photo
Book Now
In the heart of downtown Bangkok you will find Lumpini Park. Just walking distance from the BTS Skytrain stop Saladaeng, you will be transported from the hustle and bustle that is Bangkok into a tranquil, green haven.

Cycling in Lumpini Park can be fun for two reasons. For one, there is always something going on. Lumpini seems to be the stomping grounds for fairs and a number of different recreational activities. The second reason is the monitor lizards that reside here. Most likely, you will come across one of these prehistoric looking creatures along your cycling route. Fear not, as they mostly want to sunbathe and be left alone.
More Info
Open In Google Maps
Rama IV Road, Khwaeng Lumphini, Khet Pathum Wan Krung Thep Maha Nakhon, 10330, Thailand
+6622527006
View menu
Visit website
Visit Facebook page
Send an Email
Give us feedback

Ruins
Head of God | Head of God
Kill two birds with one stone by visiting and riding throughout the city of Ayutthaya. Just an hour’s ride by bus, you will find yourself in the ancient capital of Siam, surrounded by temples just waiting to be explored by nothing other than a bicycle. You do not even need to pay to get into the temple grounds if you do not want to. Simply rent your bicycle for the day and take the main roads around to each historic site. Ayutthaya is a lot quieter than Bangkok, so you do not have to be anxious about riding on the main road, either.

For those of you who are super ambitious, you can also opt out of the bus ride and cycle all the way to Ayutthaya from Bangkok. This 76-kilometer ride is not for the faint-hearted. The brutal Thailand heat is sure to take its toll on you, so if you do take this rather ambitious route, be sure to pack plenty of water.
More Info
Open In Google Maps
หมู่ที่ 4 Khlong Tho Road, Tambon Pratuchai Chang Wat Phra Nakhon Si Ayutthaya, 13000, Thailand
+6635242286
View menu
Visit website
Visit Facebook page
Send an Email
Give us feedback

Park
Serious cyclists should head to Rot Fai Park, as it has one of the longest cycling paths in Bangkok. The three-kilometer track weaves in and out of rare, large patches of greenery amongst the big city. Tennis, basketball and volleyball courts can also be found here. Bicycles can be rented for ฿20-30 a day, however, these are definitely for the casual cyclist, decorated with baskets and bells. The park is closest to BTS Skytrain stop Mochit, where visitors can take about a ten-minute motorbike taxi to get there.
More Info
Open In Google Maps
Kamphaeng Phet 3 Road, Lat Yao, Khet Chatuchak Krung Thep Maha Nakhon, 10900, Thailand
+6625379221
View menu
Visit website
Visit Facebook page
Send an Email
Give us feedback
Book with our partner and we will earn a small commission.
Give us feedback