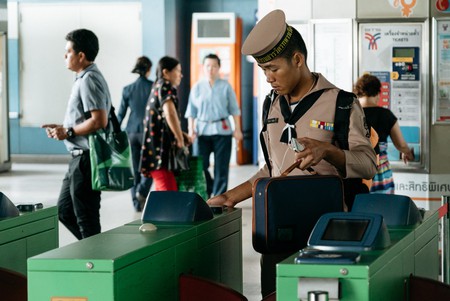 In traffic-choked Bangkok, the BTS Skytrain is a godsend. Its two lines – there are more on the horizon – make zipping around the Thai capital a breeze. That’s assuming you know how to use the system, so here’s your guide to just that.

Launched in 1999, the BTS Skytrain is one of the most popular ways to get around Bangkok. From its icy-cold air-conditioned carriages running on elevated tracks through much of downtown Bangkok, you can escape stationary traffic, taxi drivers demanding inflated fares, and the expansive (but difficult-to-navigate) bus network. Using the Skytrain is easy once you know the basics, so arm yourself with this helpful guide and you’ll be good to go. 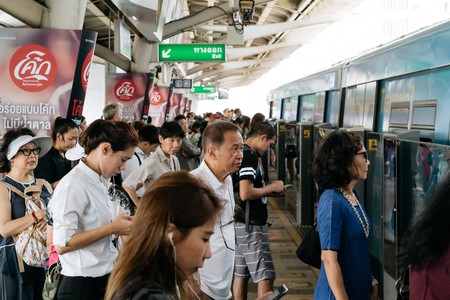 Where does the Skytrain go?

Although geographically it only covers a tiny portion of the huge metropolis that is Bangkok, the Skytrain’s two lines – known as the Sukhumvit and Silom lines, after the major roads they mostly run along – cover the most frequented parts of the city.

Both lines have been heavily extended since they first opened, with further extensions planned. Additional Skytrain, MRT subway, monorail and Airport Rail Link routes are all in the pipeline, meaning Bangkok’s public transport infrastructure should have as many as 13 different lines by 2029.

For now, the BTS’ Sukhumvit line runs from Mo Chit (alongside Chatuchak Park and its weekend market) in northern Bangkok all the way to Samrong, just across the border in Samut Prakan province to the east of the capital.

Meanwhile, the Silom line takes you from the National Stadium in downtown Bangkok, through the Silom and Sathorn business and nightlife districts, and out to suburban Bang Wa to the south. The only point at which the two lines connect is at the central Siam interchange station. 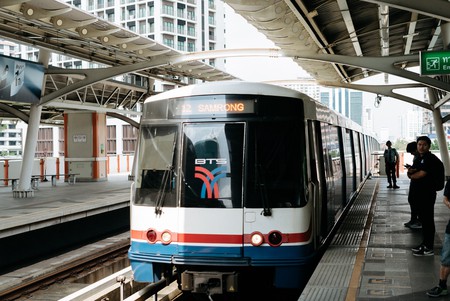 How much do tickets cost?

The BTS is one of Asia’s most expensive public transport networks, but it can still seem excellent value to those visiting from elsewhere (particularly Europe and North America). Fares are adjusted every year or so – usually heading up rather than down. Right now, riding the Skytrain costs from 16 Thai baht (£0.37) for a single ticket to travel one station, up to 59 baht (£1.38) to take in the whole system. A one-day ticket for unlimited travel costs 140 baht (£3.26).

Children under 90cm in height travel free, while kids taller than this must pay the full fare (there are height charts around the ticket machines). If using a Rabbit card (see below), there are discounts available for students at Thai universities and for the elderly. However, unlike the MRT subway, the BTS only grants Thai citizens the elderly discount – even retired expats in Thailand are not eligible.

To save time queuing, you can obtain a stored-value Rabbit card for a 100 baht (£2.33) deposit. You can then load it with cash to pay as you go (each trip is one baht, or £0.02, cheaper if you do this) or buy a set number of pre-paid trips, valid for 30 days, at a discounted rate.

But this is where the BTS gets complicated. A private company operates the bulk of the Skytrain network (from Mo Chit to On Nut on the Sukhumvit line, and from National Stadium to Wongwian Yai on the Silom line) under a franchise agreement. Meanwhile, Bangkok’s city government runs the remaining sections (from Bang Chak to Samrong on the Sukhumvit line, and from Pho Nimit to Bang Wa on the Silom line).

The two don’t work all that seamlessly on fare collection, so Rabbit card users with pre-paid trips can only travel on the main section – if you want to use the other stations, you’ll also need to add cash to your Rabbit card, which will be charged an additional flat fare of 15 baht (£0.35) for each journey.

Sounds unnecessarily convoluted? That’s because it is. The good news, however, is that this doesn’t affect short-term visitors just buying single or one-day tickets – those fares are all-inclusive. (Technically the maximum single cash fare is 44 baht, or £1.02, and if you’re going to one of the far-flung stations there’s a 15 baht surcharge, which is built into the total 59 baht fare). 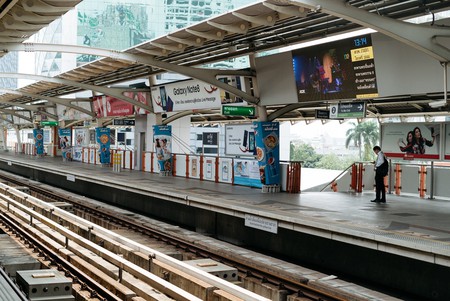 How do you buy a ticket?

Single tickets are only sold by machines, and not at the staffed ticket booths. Most of the older machines only accept coins (and some can’t handle two-baht coins), but a few larger, newer machines also take notes.

If you don’t have coins, staff at the ticket booths can provide change – they also sell one-day tickets and can set you up with a Rabbit card. Note that debit and credit cards are only accepted if you’re adding trips to a Rabbit card, not just stored value.

To use the older ticket machines, simply consult the map alongside to check the fare for your destination, and push the button for that amount on the machine. Then insert your coins into the slot, and your ticket will pop out. Collect that and any change, and you’re ready to insert your ticket into one of the station’s automatic entry gates (there’s a small arrow on the ticket to show you the correct way to push it in).

Newer ticket machines work in a similar way, except that you select your destination on the touch screen. Rabbit card users need to do nothing more than touch their card on the reader on the entry gate. 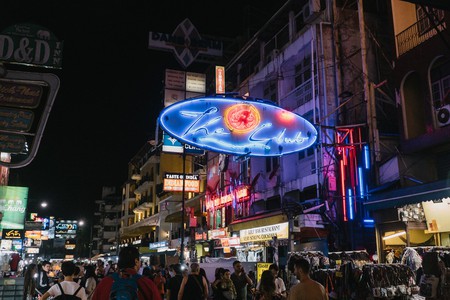 What else to know about Bangkok’s BTS Skytrain

The BTS doesn’t run quite as late as trains in other cities, so know when your last one of the night is leaving. Each station’s first and last train times are posted at the ticket booths.

The last Silom line train leaves Bang Wa towards National Stadium at midnight; going the other way, it leaves National Stadium towards Bang Na at 12.24am. If you are using both lines and taking the last train, you’ll need to allow time to interchange at Siam.

No food or drink is allowed inside the stations (just in case you wondered why the trains are so clean!), and a guard at the entrance might carry out a cursory security check of your bag. Oh, and stay behind the yellow line on the platform – the guards have whistles and aren’t afraid to use them. 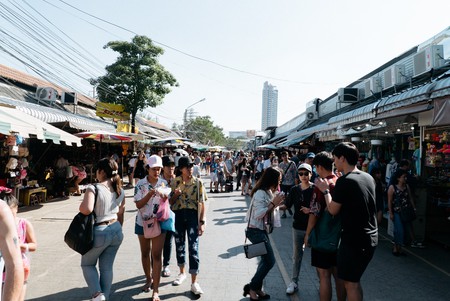 Bangkok has no shortage of high-end shopping malls, and most are conveniently located for the Skytrain. Siam station is right beside Siam Paragon and Siam Center, while National Stadium is connected to bargain-friendly MBK.

Chit Lom station is linked to Central Chidlom, and it’s a short walk from enormous Central World. Take the BTS to Phloen Chit for ultra-luxe Central Embassy, to Asok for airport-themed Terminal 21, and to Phrom Phong for sister malls EmQuartier and Emporium.

Great Thai food is everywhere around Bangkok. But for some of the best, change at Asok, Mo Chit or Sala Daeng stations and take the MRT subway to Hualamphong station for Chinatown. Alternatively, see below for heading to old-town Banglamphu, packed with long-running street food shops. 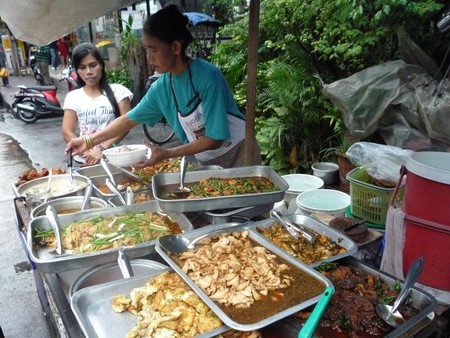 New MRT subway stations are on the way in traveller-friendly old-town Bangkok, but for now it’s off the BTS grid. To get there, take the Skytrain to Saphan Taksin and then hop on the Chao Phraya Express boat (the orange-flagged boats are cheap and convenient) to Phra Athit.

Or ride the BTS to Ratchathewi, from where you can walk to the Pratunam pier and take the Saen Saeb canal boat to Phan Fa Lilat (a 13-minute walk from Khao San Road) – or simply take a taxi from BTS Ratchathewi. 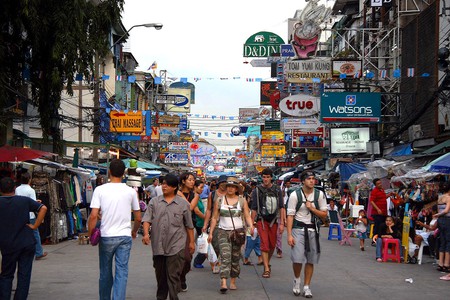 For Sukhumvit Soi 11’s popular strip of restaurants, bars and clubs, alight at Nana station (the Nana red-light district is also across the road). Thong Lo station will put you within walking distance of the kind of nightlife that attracts trendy, high-flying Bangkokians and expats alike.

Sala Daeng station is home to Bangkok’s other red-light district around Patpong, as well as the mainly foreigner-favoured gay district on Silom Soi 2 and Soi 4. Just a couple of stations along the line, get off at Chong Nonsi for the stylish and sophisticated bars and restaurants of Sathorn.

Connecting with Bangkok’s other public transport

Interchange between the Skytrain’s Sukhumvit and Silom lines at Siam – you may need to take the escalator up or down to change trains.

The BTS connects with the MRT subway at Asok, Mo Chit and Sala Daeng stations, and with the BRT express bus service at Chong Nonsi.

Change for the Chao Phraya Express river boat service at Saphan Taksin, and for the Saen Saeb canal boat at Ratchathewi (and elsewhere). If you’re taking a mainline train elsewhere in Thailand, change to the MRT subway and then travel to Hualamphong station.

Suvarnabhumi airport can be reached by Airport Rail Link from BTS Phaya Thai, and Don Muang airport is connected by a special bus route from Mo Chit station.