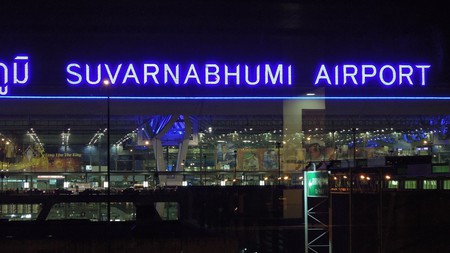 Head to the right airport | Davi

What was once a swamp in the east of the capital is now the main airport in the world’s most visited city — Bangkok. Suvarnabhumi airport is a large, modern airport that hosts flights to all corners of the globe. But to weary-eyed travellers it can be a bit of a headache. To ensure your trip to Bangkok — or out of it — goes off without a hitch, here’s a guide to its largest airport.

Head to the right airport | Davi

Knowing where you’re going is perhaps the most important advice for any traveller, and it’s certainly true for an airport. For starters, there’s more than one airport in Bangkok, with Don Muang located all the way to the north of the city. Suvarnabhumi — pronounced ‘su-wan-na-poom’ — can be over an hour away in traffic, so make sure you’re heading to the right airport in order not to miss your flight. The airport can be reached via the airport rail link, bus, or taxi.

Once you’re heading to the airport, make sure you know which terminal you’re meant to go. There are three in total: Terminal 1 and Terminal 2 handle the international flights, while the third is just for domestic flights. Unlike some airports, these terminals are close to each other with the two international terminals side by side. The domestic terminal is just 500m away from Terminal 2. This means that arriving at the wrong terminal isn’t the end of the world, but you’ll probably not want to risk lugging heavy bags further than you have to.

Checking in and security screening 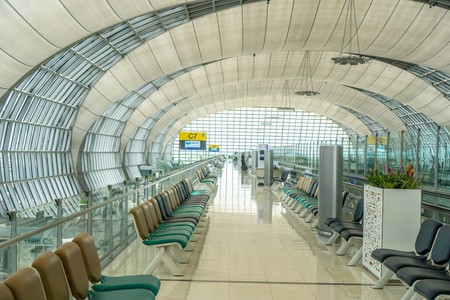 Checking in at BKK is pretty much the same as checking in anywhere. There are scales to weigh your bags and slots to check whether it’s the right size for cabin baggage, to ensure no extra fees come your way. There are plenty of check-in counters — 263 in fact — but it’s rare that all are open and operating at a given time. With this being the case — coupled with the fact that it’s such a busy airport — it’s advisable to arrive early to ensure a smooth check-in procedure.

Security screening here again is most likely the same as it is at most other major airports. Belts removed, phones and laptops in the tray, no liquid and pray you don’t get the rubber glove treatment. Once through, you’re free to enjoy the duty-free shopping and restaurants in the airport.

As a modern, shiny airport, there are plenty of things to keep you entertained. Duty-free shopping provides a wide range of cosmetics, perfumes, alcohol, clothes, tobacco and plenty of other things to take advantage of. Aside from shopping, there are a number of restaurants and bars to sit in and pass the time. From Thai food to international fast-food joints and fancier restaurants, there’s enough to suit anyone’s tastes and budget. 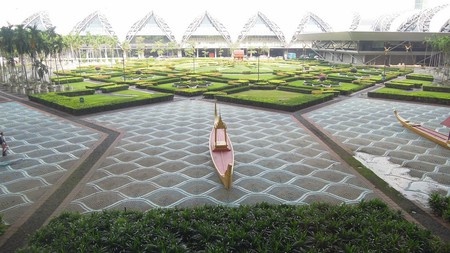 For those with a lot of time to kill in the airport, there’s a wide range of airport lounges varying in price and services where entry can be purchased. There’s also a scenic airport garden that provides a welcome change of scenery. Free Wi-Fi is available throughout, though it can often be quite weak. For more of a Thai experience, you might want to consider getting a Thai massage at the airport — after all, there’s no better way to ease your tired legs after hours traipsing around duty free.

If you’re arriving from overseas, make sure to pack a pen in your hand luggage. Visitors will need to fill in an immigration card upon arrival, which will be handed out on the plane. If you don’t have mobile data, make sure to have the address of the hotel written down somewhere, as you’ll need to write it on the card. The queue for immigration can be horrifically long, and particularly infuriating once you notice that most of the counters are closed. So make sure not to schedule a connecting flight with a tight window. 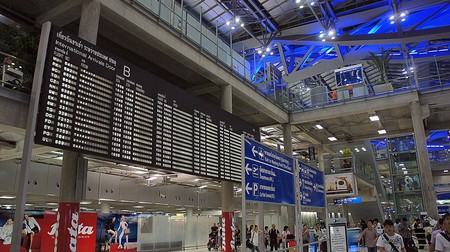 Baggage claim is clearly signposted, and there are plenty of ATMs and currency exchange booths to sort you out with some cash. When it comes to leaving the airport, taxis are available 24 hours a day from gates 4 and 7 on the first floor. When in the taxi, ensure the meter is on, and be prepared to pay both the toll fee and the airport tax of 50 baht. Depending on where you’re going, the fare will obviously vary – but a trip to the centre of Bangkok shouldn’t be upwards of 500 baht.