8 Stunning Shrines in Bangkok You Should Visit

There is no shortage of religious relics in the city of Bangkok. Regardless of its urban decor, visitors are sure to find a number of temples, spirit houses, and shrines amid the towering skyscrapers in the capital. People visit these sites with hopes of love, success, and even fertility. Here, eight stunning shrines in Bangkok you should visit. 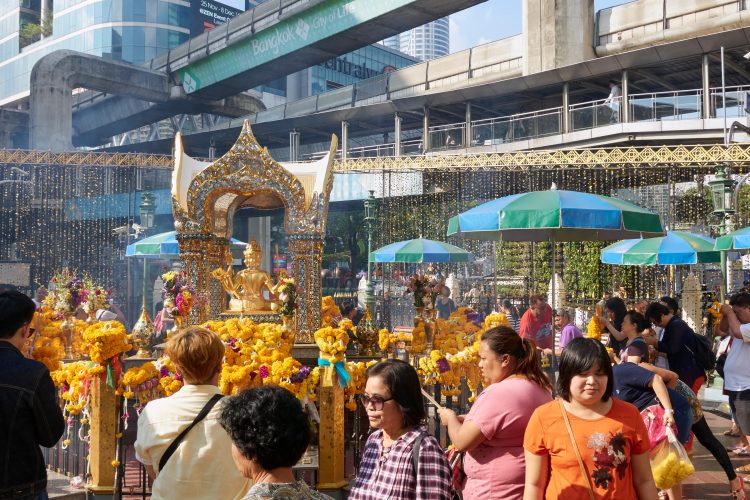 The Erawan Shrine is the most well-known in Bangkok and almost all of Thailand. This Brahman shrine is located on one of the busiest intersections in the capital. Since it was built in 1956, the shrine has seen its fair share of people mill in and out making wishes in hopes they will soon be granted. This was not the shrine’s original purpose, however. The Erawan Hotel was believed to have bad karma, and the shrine was built to counter a series of unfortunate events which had taken place. That being said, the shrine was bombed on August 17, 2015, which killed 20 people. Seven people were also injured at the shrine when a driver suffered a stroke and slammed into the gates surrounding it.

Those feeling down on their luck should head to the Ganesha Shrine. Ganesha is the god of success, and business people and those hoping for a creative spark to ignite work of some sort will visit this shrine in the hope of inspiration. Located off the modern BTS Skytrain Station Chit Lom, the large golden elephant sits just outside CentralWorld. Thais will come to offer colorful, marigold garlands and different types of food, like bananas. 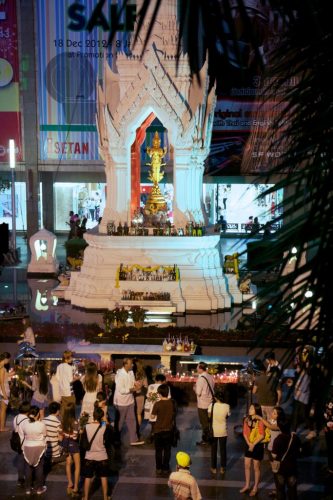 The Trimurti Shrine sits just adjacent to the Ganesha Shrine. Though they can be found in the same vicinity, the reasons as to why people visit these two shrines are entirely different. While those who are down on their luck in regards to business head to Ganesha, those who feel as though their love life is lacking instead opt to visit the Trimurti Shrine. Also referred to as Bangkok Lover’s Shrine, singles will gather around this shrine and offer red roses in hopes of finding ‘the one’. The original shrine lies in Ayutthaya, and this replica sits just outside the major mall CentralWorld and was built in 1989. It can be found just across Sukhumvit Road from the Erawan Shrine, and it sits high on its platform, the golden deity shining underneath the large, white dome. 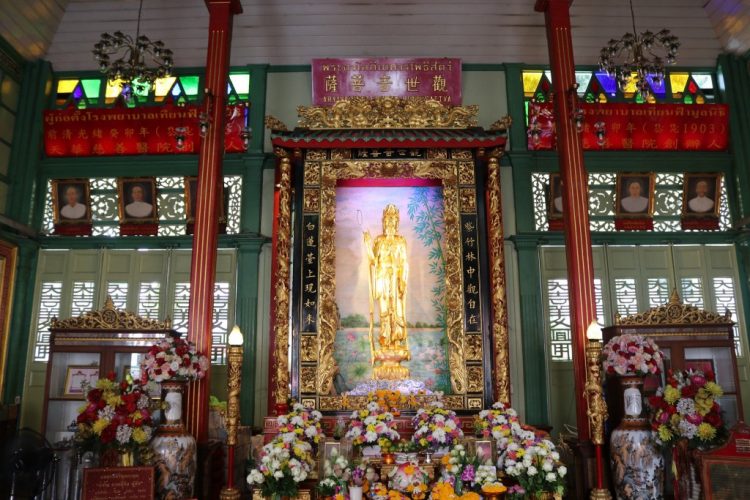 Kuan Yin is an iconic female goddess. As the goddess of mercy and compassion, she encompasses many of the values held by those who are Theravada Buddhist, which is practiced by over 95 percent of the country. In Bangkok, one of the most iconic images of Kuan Yin is found in an old area of Chinatown along the Chao Phraya River. The statue, carved from teak wood, was apparently made during the Song Dynasty some 900 years ago. In addition to the image of Kuan Yin, the shrine in which it is housed is bursting with colorful Chinese decor with stunningly detailed roofing.

Outside yet another major shopping mall in Bangkok you will find the Lakshmi Shrine. Lakshmi is the Hindu goddess of purity and wealth. The stunning gold-colored woman sits on the fourth floor of the Gaysorn Plaza in the outdoor area. She is raised up on a platform, standing on the iconic lotus flower. Her four-armed figure can be seen from beneath.

Unlike the other shrines on the list, the Mae Nok Shrine was not built for any god or religion: it was built for a ghost. Mae Nak is one of the most famous ghosts in Thailand. In 19th century Bangkok, Mae Nak’s husband went away to war. She died while giving birth while he was away, and he had no idea of this when he returned. She managed to fool him into believing she was alive, killing off a few neighbors in order to keep her secret. This legend was even turned into a movie and has its own shrine in the capital. The shrine was built in Wat Mahabut temple off the BTS Skytrain Station On Nut. She is apparently buried here, as well.

Big, small, bent, straight: the Bangkok Phallic Shrine has every shape and size of penis imaginable. The shrine honors Chao Mae Tubtim, the female fertility spirit. It is believed that those who want to conceive should visit the shrine in hopes of becoming pregnant. Those who do not want to be parents anytime soon should stay far, far away from the Chao Mae Tuptim Shrine… just to be on the safe side! 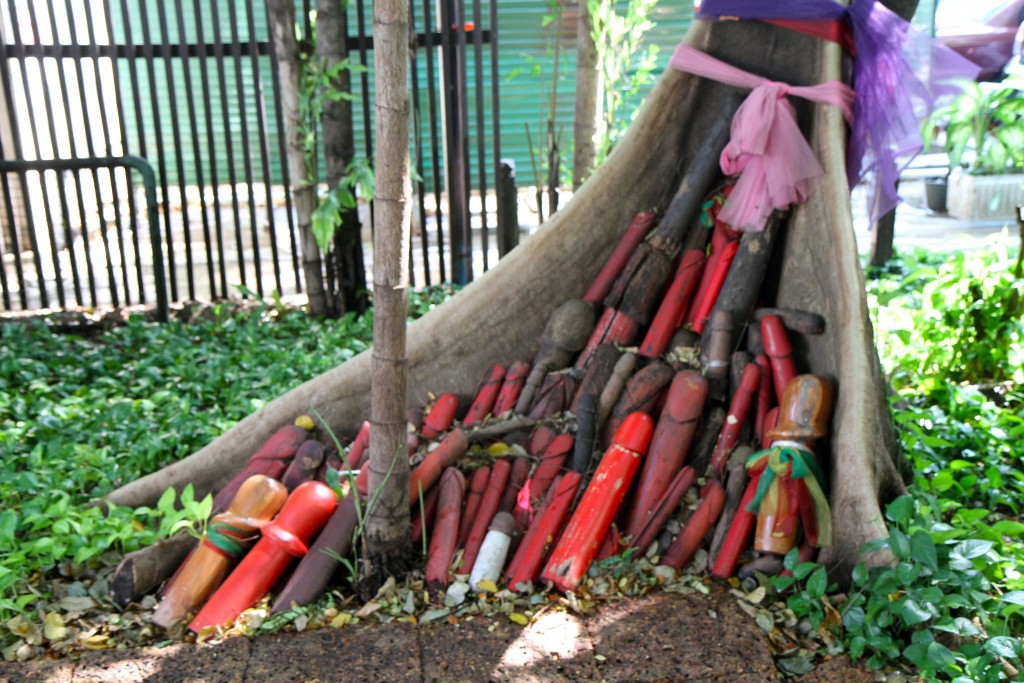 The Indra Shrine may be the most colorful of all the shrines in Bangkok. The green deity is made of jade, and is bedecked with colorful garlands of marigolds and incense given to him by those who come to pay homage. Two of his four arms hold a bow and thunderbolt. The shrine sits just outside Amarin Plaza.