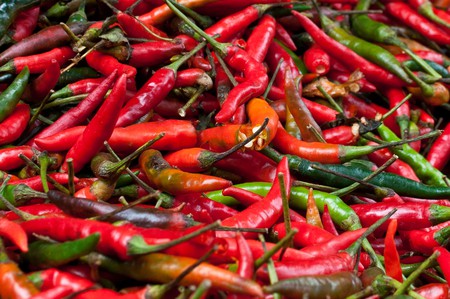 The line between street food and a sit-down meal is often quite fine in Thailand. You’ll find plenty of basic stalls where you can grab a snack to go; while others set up simple plastic tables and chairs for diners. Thai food culture is lively, communal, and rewards those who are willing to take risks with new dishes. Look out for these fantastic dishes when you’re browsing the country’s night markets and streets.

Pad See Eiw is like the spaghetti and meatballs of Thai cuisine: hearty, warm, and comforting. The dish consists of wide rice noodles which are stir-fried in dark soy sauce with chicken, pork, or beef as well as either Chinese broccoli or cabbage. A flavorful but safe choice, it’s an excellent option for those who can’t handle spicier Thai dishes but want to branch out from pad thai. Foodies who like a little more kick can add dried chili flakes, vinegar, or both. 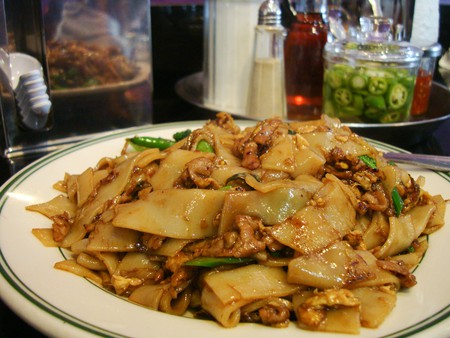 An addictively sweet snack or dessert, kluay tod is deep fried mini-bananas. The dish is usually made with less ripe bananas, which are more suitable for deep frying. The bananas are typically prepared in a batter of desiccated coconut and sesame seeds. The result is a slightly crunchy and golden outside, and a creamy and warm center. They’re excellent freshly fried, or even after they cool off to room temperature. 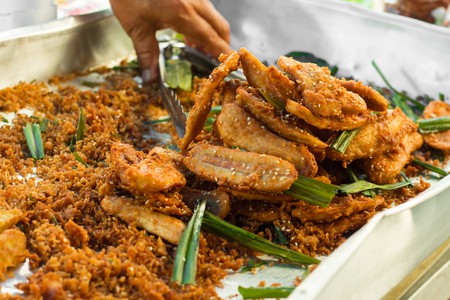 Pad kra pao consists of minced pork or chicken stir fried with Thai basil and chilies, all served over white rice. It’s definitely not a dish for picky eaters: The Thai basil has a very sharp, peppery flavor, while the chilies add a hefty dose of spice. You can always take the heat down a notch by asking the vendor to make it pet nit noi (only a little spicy). The dish also often includes pieces of chicken and a fried egg. 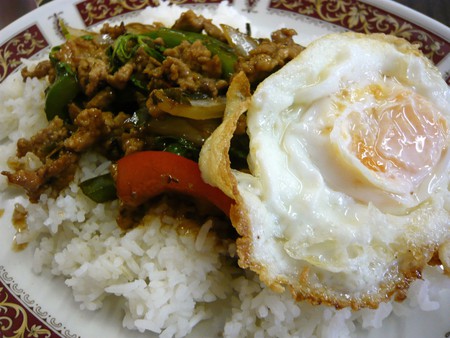 Som tam is one of the most popular dishes in Thailand and comes in a variety of serving styles. The basic dish consists of shredded green papaya, tomatoes, carrots, peanuts, dried shrimp string beans, sugar, garlic, fish sauce, lime juice, and plenty of chilies. The ingredients are mixed together using a mortar and pestle, which blends the flavors beautifully. This dish tends to be quite spicy by default, so depending on your tolerance level, it’s often best to ask for it mai pet (not spicy). 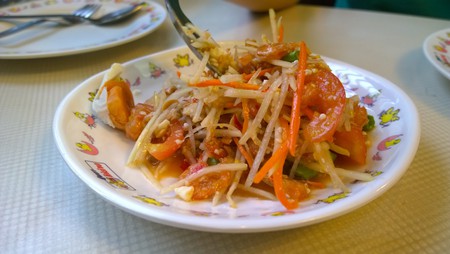 Khao kha moo is a simple but satisfying dish consisting of stewed pork leg served over rice. When prepared well, the pork is cooked in a mixture of soy sauce, sugar, and spices until juicy and tender. It’s usually easy to find to the street stalls that sell it, because you can look out for massive pots filled with stewing pigs’ legs. If you prefer less fatty meat, you can ask for it mai ow nang (no skin). It is often served with Chinese broccoli and a hard boiled egg on the side. 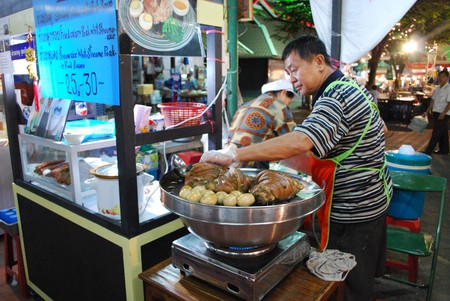 One of the cheapest dishes you’ll see served at most food stalls is kai jeow, or a Thai omelet served over rice. Thai omelets are made a little differently from their Western counterparts; the inside is fluffy like a standard omelet, but the outside is golden and crispy. The dish is usually cooked with fish sauce and chillies, and topped with chili sauce. It can be eaten any time of day, but many Westerners enjoy it for breakfast. 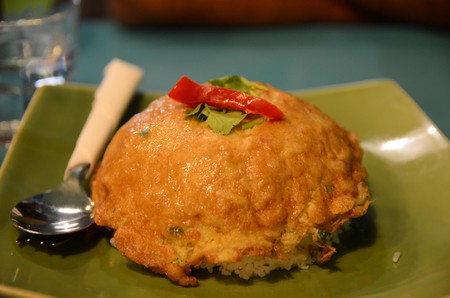 Moo ping is easily one of Thailand’s best on-the-go street snacks. These skewers of grilled pork are often sold along with little plastic bags of sticky rice. Although pork skewers are common, you’ll also see pieces of chicken and other meats grilled up and served by street vendors. Every vendor makes their marinade a little differently, but it typically involves a mix of garlic, soy sauce, and sugar, creating a flavor that’s pleasantly sweet and savory. 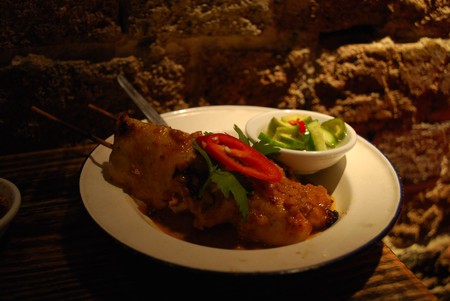 Sai ooah is a northern Thai sausage made with a variety of aromatic ingredients, which make it taste like so much more than just pork. The pork is usually mixed with ingredients like lemongrass, kaffir lime leaves, galangal, and often red chilli paste as well. The mixture is grilled in an intestine wrapper until golden and delicious. Although Chiang Mai is particularly famous for its sai ooah, you’ll see it served by street stalls across the country. 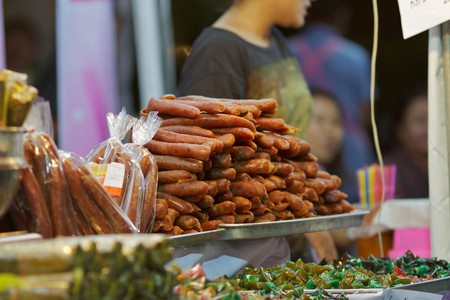 Fried chicken may not be a uniquely Thai dish, but it’s extremely popular in Thailand. Gai tod is typically prepared by marinating chicken wings or drumsticks in a blend of spices and rice flour before deep frying the whole mixture. To add a little extra flavor, the chicken is also often finished with Thai chilli paste or served with a spicy dipping sauce. You’ll see gai tod served everywhere from night markets to trains, often accompanied by a bag of sticky rice. 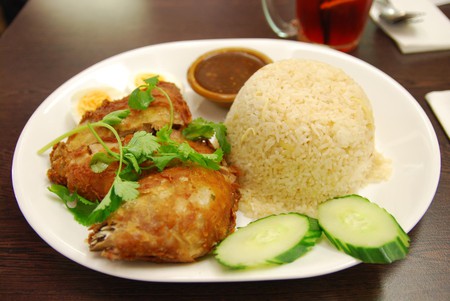 Guay Teow describes any type of noodle soup. It can be made with chicken, pork, or beef stock, as well as either rice noodles or egg noodles. There are so many variations of the dish that, like many Thai foods, it’s a bit different everywhere you try it, but it’s always warm and satisfying. Most of the time, vendors also add wontons or meat balls to the broth. The dish is best topped with sugar, dried chilli peppers, lime juice, and fish sauce. 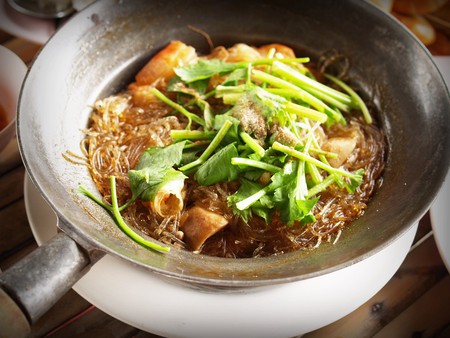 Spring rolls rarely break any culinary boundaries, but they’re a reliably tasty go-to snack regardless. Vendors will typically chop the long rolls up into small bite-sized pieces, which are then loaded into a plastic baggie before being drenched in sweet chili sauce and served with a toothpick for eating. Poh pia tod can be made with a variety of different fillings, such as meat, vegetables, or rice noodles. Although this classic deep-fried version is undeniably satisfying, it’s also worth trying fresh spring rolls (pa pia sod) which are much healthier but just as tasty. 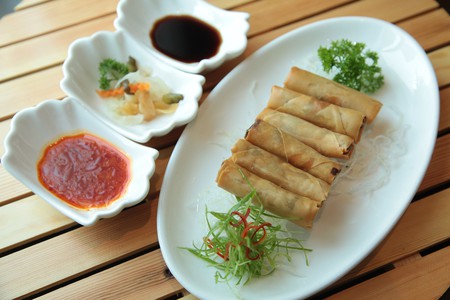 Roti is another dish that didn’t originate in Thailand, but has managed to become a street market staple over the years. The dish is similar to a pancake or crepe, with dough surrounding a filling of bananas along with condensed milk or chocolate sauce. Don’t miss the opportunity to watch your roti being prepared, with skilled vendors stretching the dough extremely thin and then expertly frying it on a large hotplate. The slightly-browned dough is quickly folded around the fillings to create a square, which is then chopped up into snack-sized pieces. 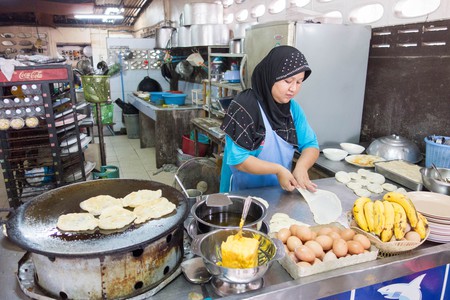 It’s no secret that there are a lot of delicious Thai curries, but Massaman is particularly unique because it incorporates noticeably Persian influences. Like most curries, it’s made with coconut milk, along with chicken and potatoes which form the bulk of the dish. The curry is flavored with roasted peanuts, cinnamon, bay leaves, tamarind sauce, and sugar. It’s another good option for foodies who prefer milder dishes, and it can also be made with tofu instead of chicken for vegetarians. 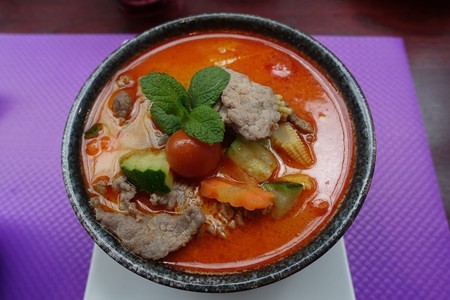 Kao niew ma muang is simple but extremely delicious, made with sticky rice, fresh mango slices, and coconut cream syrup. The sticky rice absorbs the coconut cream, creating a pleasantly soft texture and mild sweet taste. The dish particularly popular when mangos are in season from April to May, but you’ll see stalls serving it up year round. 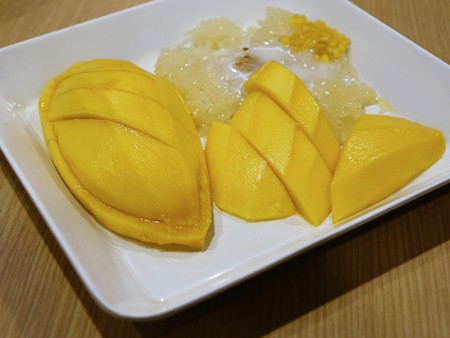