Thailand’s national parks are the hidden gems of a country which has everything. Here are the top 10 most beautiful parks in Thailand to visit.

Just outside Chanthaburi you will find Namtok Phlio National Park. Without a foreigner in site, you will be greeted by nothing other than emerald green foliage and local Thais bathing in emerald pools. Be sure to bring a swimsuit, as there are plenty of pools to stop along your journey to cool off and swim with the local tourists…and fish. There are also plenty of food stalls and vendors leading up to the park, as well as bungalows available for rent — if you find yourself not wanting to leaving any time soon, they’ll have you covered.

Park
Khao Yai National Park | © Ian Watt / Alamy Stock Photo
Established in 1962, KhaoYai is Thailand’s first official national park, as well as the third-largest park in the country. It was declared as a World Heritage Site by UNESCO. KhaoYai’s wildlife is best known for its wide variety and abundance of birds, but other mammals, including elephants and bears, have been spotted at this exotic national park.
More Info
Open In Google Maps
Hin Tung, Nakhon Nayok, 26000, Thailand
+66860926529
Visit website

Scenic, Outdoors, Instagrammable
Give us feedback

Just outside Krabi Province in southern Thailand is Tha Pom Khlong Song Nam, or “Two Water Canal.” Visitors follow crystal-clear canals along a wooden pathway that takes them further into the national park. The water is deep emerald due to the nearby seawater mixing with fresh water coming in from the nearby mountains. Mangrove trees compliment the water, growing from all sides of the canal and home both crabs and lizards. 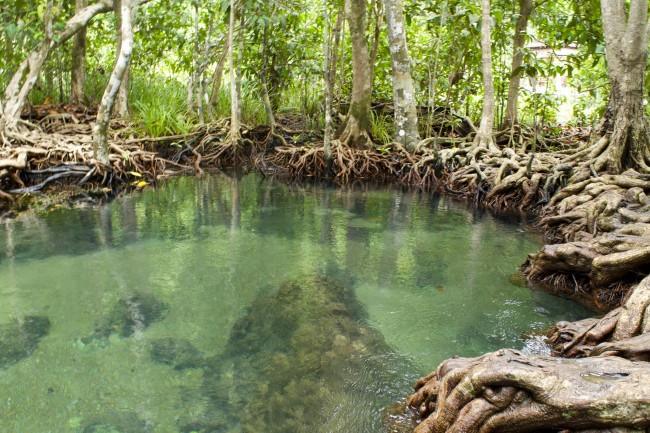 Park
Bordering Laos is the Pha Taem National Park. Look out onto the Mekong River as you survey the surrounding park, but be careful: there is little between you and the steep drop from the cliff’s edge. This is one of Thailand’s few national parks that not only has natural beauty and a variety of species but also historical roots; some 3,000-year-old designs, animal drawings and hand prints come together to tell a story on the cliffs.
More Info
Open In Google Maps
Huai Phai, Ubon Ratchathani, 34220, Thailand
+6645249780
Visit website
Give us feedback

Park
Ocean Views From Khao Sam Roi Yot National Park | Courtesy of Kelsey Madison
Strap on your hiking shoes because the only way to capture the beauty of Khao Sam Roi Yot National Park is by first climbing a steep, daunting cliff. If you’re not up for the challenge, boats are also available to take guests directly to the cave’s opening, but in doing so, you will miss out on some of the beautiful views the height of the climb offers you. After making the journey up the steep cliff, guests of the park are greeted by the beautiful Phraya Nakhon Cave, covered in stalagmites and home to a royal pavilion. The cave is also decorated with trees growing from its core that come together with roots dangling from the top. Located about three hours from Bangkok, this marine national park has everything an outdoorsy traveler could want, including panoramic ocean views.
More Info
Open In Google Maps
Prachuap Khiri Khan, Thailand
+6632821568
Visit website
Give us feedback

Park
About six hours north of Bangkok you can find Thung Salaeng Luang National Park. Pine trees and wild flowers can be found on this 16 square kilometer park. This is one of the few parks where visitors are allowed and able to go trekking or hiking, so be sure to bring your gear.
More Info
Open In Google Maps
Ban Yaeng, Phitsanulok, 65120, Thailand
+66887564940
Visit website
Give us feedback

Park
About an hour outside the city of Kanchanaburi lies the beautiful Erawan National Park. One can spend an entire day exploring its seven levels of waterfalls, lounging in an emerald green pool or simply hiking the trails. Being that it is one of the more popular national parks in Thailand, you should visit during the week to avoid the throngs of tourists. If you don’t think you can see the entirety of the park in a day, there are bungalows available for rent to prolong your stay.
Permanently closed
More Info
Open In Google Maps
Give us feedback

Park
Along Myanmar’s border is Thailand’s largest national park, Kaeng Krachan National Park. Both the Phetchaburi and Pran Buri River originate from within the park. It is said that this national park is home to the widest range of wildlife, including leopards, elephants and porcupines.
More Info
Open In Google Maps
ตำบล แก่งกระจาน, Phetchaburi, 76170, Thailand
+6632459293
Visit website
Give us feedback

Forest, Park
Mangroves in Pranburi Forest Park | Courtesy of Kelly Iverson
You can truly get lost in the Pranburi Forest Park, an enchanting combination of weaving wooden trails intertwined with mangrove trees that grow from a muddy floor. Crabs can be seen sprawling the length of every root, hiding behind branches as you pass. Informational huts are scattered throughout the park’s entirety, informing visitors of everything that they need to know about this breathtaking park.
More Info
Open In Google Maps
14 ผาสุกวนิช 16, Tambon Pak Nam Pran, Chang Wat Prachuap Khiri Khan, 77220, Thailand
+66614644951
Give us feedback

Located in southern Thailand, Khao Sok National Park showcases one natural feature that makes Thailand so famous in the first place: its limestone cliffs. The park also showcases other natural features, including thick rain forests, waterfalls and a lake.