Why in Hong Kong Do You See Elderly People Picking Up Cardboard Boxes? 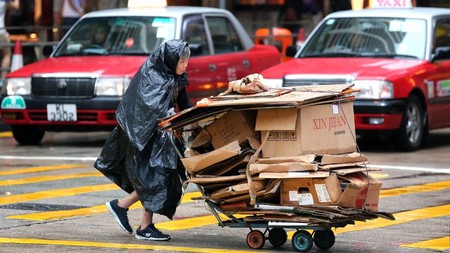 Nicknamed ‘cardboard grannies’, the sight of senior citizens pushing trolleys through the streets of Hong Kong in search of cardboard is one that draws the curiosity of many a visitor. Due to poor social welfare and pension policies, for some old people, this is the only way they are able to financially support themselves.

It’s not uncommon in Hong Kong to see senior citizens, mostly elderly women, navigating pushcarts through the streets in search of discarded cardboard boxes to sell to local recyclers in return for small sums of money. It’s a sight that leaves many perplexed, sadly it’s one that is indicative of the lack of financial support for a huge elderly population in one of the world’s richest cities.

It’s estimated that there are at least 5,000 ‘cardboard grannies’ who scour the city streets in search of cardboard boxes to sell in return for as little as 70 cents per kilogram. For many, this is their only means to supplement their income and put food on the table. 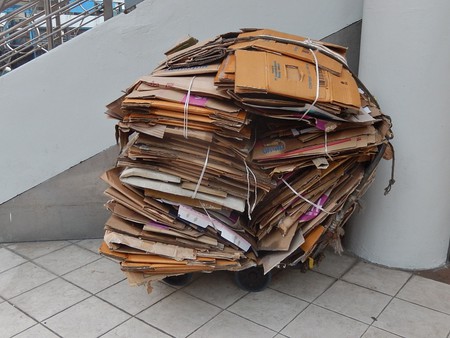 Despite being one of the richest cities in the world, Hong Kong is also one of the most unequal, with a huge disparity between the rich and the poor. According to official figures from 2015, more than 300,000 people aged 65 and over lived below the official poverty line, which is set at a monthly income of HK$3,800 (US$490). Anyone aged 70 is entitled to HK$1,325 (US$170) a month, but social security is means-tested and some receive higher monthly payments of at least HK$3,240 (US$414).

However, these handouts are a pittance and not enough to cover the basic costs of everyday living – rent, food, utility bills, etc. This forces many senior citizens out onto the streets to collect cardboard. Some can earn up to HK$40 to HK$60 (US$5-8) a day by selling cardboard boxes to recyclers, money that can then go towards paying rent or providing meals.

Some of these grannies are in their late-eighties, hunched over, fighting conditions like arthritis, but still they scour the streets for cardboard as the only way to make ends meet. Without home ownership, savings, or family to support them, they see little to no alternatives.

At the start of 2018, Hong Kong posted a record budget surplus of HK$160 billion (US$20.4 billion). However, it looks unlikely that any of this money will be pumped into financially supporting Hong Kong’s elderly. Critics have consistently accused the Hong Kong government of pouring money into over-budgeted infrastructure projects instead of helping those living in poverty.

The debate over what to do divides opinion. Some are in favour of more handouts, while others worry that Hong Kong may become less business-friendly if it turns into a welfare state with high taxes. Hong Kong has always prided itself on its low taxes (the majority of people in Hong Kong pay very little income tax), but this means that social security is incredibly meagre.

It’s estimated that the majority of the ‘cardboard grannies’ are collecting cardboard for financial reasons. Many refuse to apply for social security because they prefer to be financially independent.

There is also the argument that retirees need to feel useful and socially engaged, and there have been calls for the government to actively promote employment for the elderly. According to the South China Morning Post, “Social workers and academics, in Hong Kong, have suggested integrating cardboard sellers with the recycling industry so that they can have a normal job earning proper wages and, more than that, their dignity.”

It’s not known how or when a solution will be brought forward. Meanwhile, Hong Kong has the top life expectancy in the world – a significant ageing population – therefore it’s hoped that sooner, rather than later, something will be done to secure a life beyond cardboard box collecting for its poorest elderly citizens.