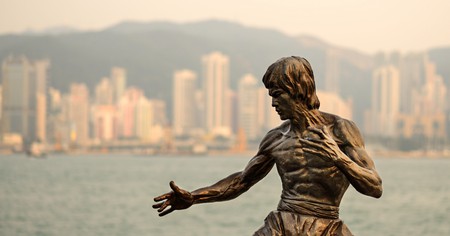 Hong Kong’s martial arts films are its most iconic global export. From the cinematic stardom of Bruce Lee to the comic personas of personalities such as Jackie Chan and Stephen Chow, kung fu films have attracted massive cult followings both at home and abroad. Here are the 10 most important Hong Kong martial arts films from the past half-century, in chronological order.

Kung fu movies as we know them emerged in the mid-1960s, with the rise of directors such as Kung Hu (1931-97). In Come Drink With Me, Shanghai-born actress and dancer Zhang Peipei plays the Golden Swallow, a graceful swordswoman who goes on a mission to rescue her brother from bandits. This landmark film heralded the rise of a new, expertly choreographed Mandarin-language cinema that arose in Hong Kong at this time, overtaking the less sophisticated Cantonese swordplay movies that preceded them, and paving the way for stars like Bruce Lee and Jackie Chan to take the world by storm in the 1970s.

The stardom of Bruce Lee single-handedly brought Hong Kong’s martial arts films to international audiences. Fist of Fury marked Bruce Lee’s second major role and broke box-office records across Asia. Set during the Japanese occupation of Shanghai, Bruce Lee plays Chen Zhen, a student whose mission to defend the honour of his assassinated master closely paralleled China’s larger struggle against oppression of foreign invaders and the humiliation of becoming second-class citizens in their own country. It was during this time that the sub-genre of kung fu action films emerged as a distinctly Hong Kong creation, distinct from the swordplay films known as wuxia that came from Shanghai filmmakers.

Released six days after Bruce Lee’s death, this was the movie that broke Bruce Lee into the US and Western market, and made him an international icon. A joint production between Hong Kong’s Golden Harvest and the US’s Warner Bros, it was filmed in Hong Kong but had an American director, Robert Clouse. Bruce Lee stars as an undercover agent for British intelligence, who joins a fighting tournament organised by the film’s villain, the nefarious Mr Han. The film remains one of the greatest kung fu films of all time and is responsible for sparking the kung fu mania that gripped the US during the 1970s, a craze that was encapsulated by the Carl Douglas 1974 hit single ‘Kung Fu Fighting’.

A cult classic directed by the renowned martial arts choreographer Yuen Woo-ping, Drunken Master was Jackie Chan’s first box-office success, and launched the rise of Chan’s unique brand of comedic kung fu, filling in the gap left by Bruce Lee’s death. Chan stars as an irresponsible martial arts student whose misbehaviour inspires his father to send him to train under the notoriously sadistic Beggar So, in order to learn the Drunken Fist style of kung fu. Full of slapstick comedy and giddy antics, this remains one of the most significant martial arts movies of the era despite its low budget.

A supernatural fantasy epic directed by Tsui Hark, this film draws on Chinese mythology to tell the tale of a young hero who sets out on a perilous journey to find two celestial swords, in order to defeat evil beings poised to take over the mortal realm. Zu dramatically changed Hong Kong martial arts cinema by introducing ‘wire fu’, a technique that uses wires and pulleys to help actors perform gravity-defying stunts. The action choreography was further enhanced with groundbreaking special effects, with the help of Hollywood veterans who had worked on blockbusters such as Stars Wars and Blade Runner. This film heralded a transition in Hong Kong cinema that relied on spectacular effects rather than the martial arts abilities of the actors.

One of Jackie Chan’s most famous and beloved films, Police Story won Best Film at the 1986 Hong Kong Film Awards. Chan is director, co-writer and lead actor here, playing a detective who finds himself on the run after he’s framed for murder by drug lords. After trying to make it in Hollywood with films like James Glickenhaus’s The Protector (1985), which turned out to be a flop, Chan returned to Hong Kong to make what was arguably his best film. Police Story contains memorable stunt work that has since been imitated by both American and Asian films alike, including a famous scene involving flying through a glass window that almost cost Chan his life.

Fist of Legend is a remake of Bruce Lee’s Fist of Fury, and is known for its gorgeous choreography by Yuen Woo-ping, who also worked on Crouching Tiger, Hidden Dragon and the Matrix trilogy. In fact, it was through this film that Yuen attracted the attention of The Matrix’s Wachowski siblings. Directed by Gordon Chan and starring Jet Li, the film follows a Chinese student in Japan who returns to Shanghai to avenge his master. The stunning and tightly choreographed fight scenes, which do away with the wire fu techniques that were trending at the time, make this film a masterpiece.

Stephen Chow’s breakthrough international hit Shaolin Soccer is a martial arts sports comedy about a band of Shaolin monks who use their superhuman martial arts skills to play soccer. Chow is known for a farcical style of comedy known as mo lei tau, and his signature banter and absurd juxtapositions are on full display here. This over-the-top action comedy blends a Bruce Lee-style athleticism with modern CGI, cementing Chow’s status as a kung fu film genius with extraordinary comic flair. It was the highest-grossing film in Hong Kong history at the time, and was topped only by Chow’s next big hit, Kung Fu Hustle.

Another phenomenal box-office success from Stephen Chow, Kung Fu Hustle was inspired by Palm of Ru Lai (1964), a kitschy cult series about an underdog who masters the legendary Buddha’s Palm technique. The film is set in a 1940s Shanghai shanty town and revolves around a feud between the town’s local kung fu masters and the notorious Axe Gang. For this film, Chow chose to play down his unique brand of Cantonese verbal humour in favour of visual slapstick, stunts and CGI work in order to appeal to a global audience.

The first in a trilogy, this epic martial arts film won Best Film and Best Action Choreography at the Hong Kong Film Awards. It’s a semi-autobiographical account of Ip Man, a martial arts master whose most famous student in real life was Bruce Lee. Set in Foshan, China during the Second Sino-Japanese War during the 1930s and ’40s, Ip gets into trouble when his martial arts skill attracts the attention of the Japanese. This film is known for its fast-paced scenes of hand-to-hand combat, which were coordinated by the celebrated choreographer Sammo Hung.

We find out more about the history of martial arts cinema in Hong Kong in this episode of Beyond Hollywood.