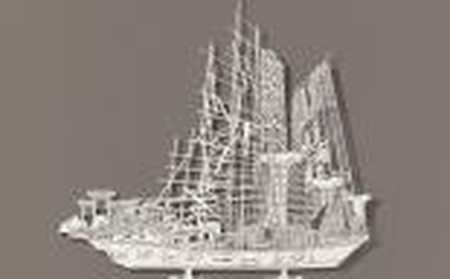 Hong Kong born, Pittsburgh, Pennsylvania based artist Bovey Lee created her first cut paper artwork in 2005, although she has been practicing Chinese calligraphy since she was ten years old and drawing and painting since youth. Jessica Ransom describes her incredibly intricate, lace like paper cuts, which make reference to art history, architecture and topical subjects while remaining heavily influenced by her artistic background. 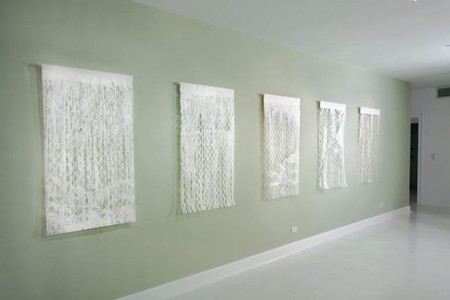 Though Bovey Lee’s current medium is paper cutting, the artist has progressed through many styles and technologies in more than 20 years as a practicing artist. She earned her BA in Fine Arts at the Chinese University of Hong Kong before moving to the United States to continue her studies. Lee’s work is littered with references to both art history and architecture, but also employs cutting edge computer technology. Paper is the humble medium that Lee elevates to new heights and sets free as in Falling Water (2010) where the more than four foot long sheets of intricately cut paper hang from rods so that they move with the slightest breeze. The first in this series of five works is intricately cut and resembles the most heavily embroidered lace. Each successive work becomes lighter and lighter as if the waterfall is ceasing. The final work appears as delicate as raindrops briefly captured on a pane of glass. Unlike traditional Chinese papercuts, which are entombed on a board, Lee often captures her work, cut from rice paper laid on silk, between glass so that the resulting shadow offers another dimension to the piece. 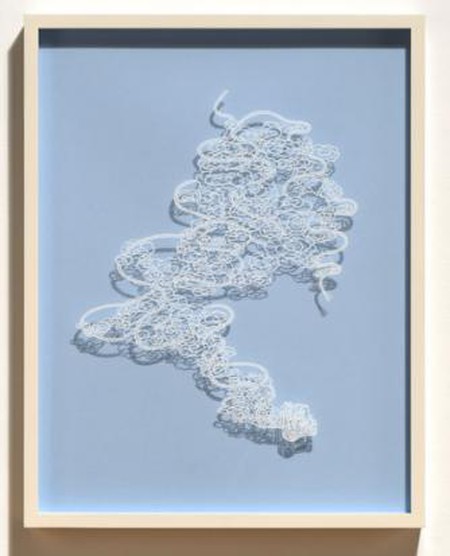 Bovey Lee’s work is rooted in her traditional Chinese painting and calligraphy training combined with modern computer technology and her own innovations. In one of her earliest group shows, Lee presented a traditional Chinese ink wash painting entitled Landscape (1989). When considered next to recent works such as Lifting Clouds (2012) the influence of her traditional training is immediately recognisable in the swirling clouds reminiscent of the washed images of the famous mountains in Guilin.

Lee has paid homage to the traditional subjects of Chinese paper cutting in her Zodiac Series for the Swiss magazine Annabelle, but more frequently she addresses topical subjects such as environmental and natural disasters or social concerns. In her installation Black Water (2010) at the Pittsburgh Center for the Arts, for example, Lee responded to the BP oil disaster in the US Gulf of Mexico. She referenced the toil of women laborers in her paper cut Sewing Highways (2011). In the image, which has become one of her most recognised works, a haggard seamstress sits at a sewing machine churning out highways like zippers. There is also humor and irony in much of Bovey Lee’s work. Take, for example, her tongue in cheek commentary on daily suburban life as the perfect family bakes their ideal new home in Baking McMansion (2012). 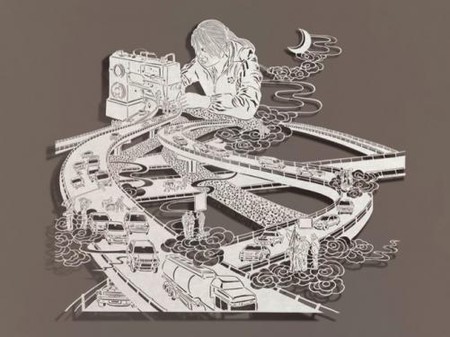 In order to fully appreciate the complexity of Bovey Lee’s creations, the viewer should consider not only her earliest Chinese watercolors, but also the work on her now defunct website Body Diaspora (1999-2000) and her series Body Garden (1998-2000) in which she morphs images of her own body parts into digital still lifes. In these earlier works, Lee deconstructs the body and then, using her computer, reconstructs fingers, breasts, and eyeballs as flowers, fruit, and landscapes. In Body Gardens–Lemons (2000), for example, her breasts become plump, juicy lemons rolling across a print as velvety and deeply shadowed as an old master still life. 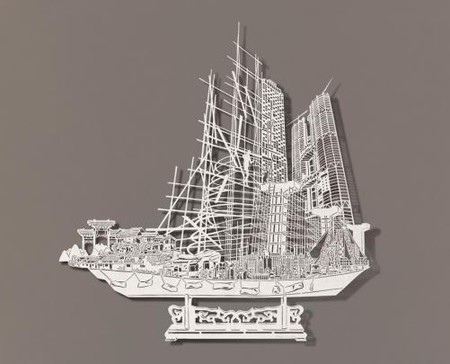 Though traditional paper cutters often create multiples of the same image, Lee works like a painter and creates singular creations. After drafting her idea Lee, who obtained an MFA in computer graphics from the Pratt Institute in 2000, carefully collages together computer images to create the fantastical story she has imagined. Once she achieves her preferred image, she prints the photo to use as a guide for her paper cutting. Lee’s tools are simple, Chinese xuan paper backed with silk and an X-acto knife. Lee has been using rice paper since as a child in Hong Kong she sat practicing her calligraphy. The composition and skill of her paper cuts is incredibly detailed and intricate, and, perhaps because of her use of computer technology to create her images, they have a somewhat digital aesthetic. The Same Boat (2011) is a perfect example of Lee’s ability to morph images into a coherent, but also keenly observed and penetrating, narrative. In this work the bamboo clad skyscrapers constantly evolving in the Hong Kong skyline vie for space with highway overpasses as well as ancient villages and temples. Ironically, all of the images are crammed into the form of a carefully constructed model ship that sits delicately atop an ornate stand. At first sight Bovey Lee’s papercuts are delicate creations of beauty. Upon closer examination, they beg their viewer to consider darker narratives.

Through her own innovations to the art of paper cutting, Bovey Lee is breathing new life into a fading art form. She is perhaps a mirror of China, her native country, which is constantly growing and changing in an effort to remain relevant on the world stage.