An Interview With Jeff Turlik Of The Blue Man Group

In anticipation of one of the most exciting theatrical performances soon to hit Macau, The Culture Trip Hong Kong talks with Jeff Turlik, Creative Director and Music Supervisor for The Blue Man Group. Turlik is a native of Pittsburgh, who has worked as a music composer for cartoons and documentary films, played in various bands and orchestras, and more. Now, Turlik assists with writing new performances and special appearances for the group, hires and trains Blue Man musicians around the world, and composes and produces music and sound design for albums. 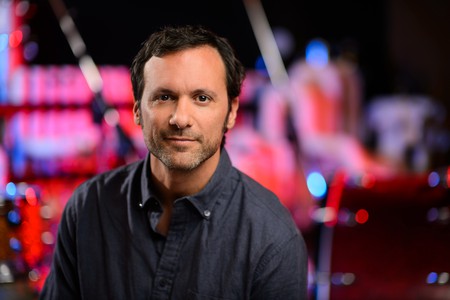 What inspired you to create the Blue Man Group?

Chris, Matt and Phil Stanton are close friends who shared common interests in many varied areas. We loved continuing to learn about art and philosophy as much as science and technology. We loved exploring current avant-garde theater as well as timeless comedy acts like Buster Keaton and The Marx Brothers. We were equally excited by punk rock and new wave as we were tribal music from around the world. At the same time, we each had some specific talents and skills but never felt particularly virtuoso at any. Chris had been a drummer in bands but was also interested in acting – I had studied acting but had also dabbled in a few musical instruments – Matt knew something about business and how to get a project off the ground and was also ready to learn just about anything else he could.

We wanted to start a performance project of some kind that would include all of these interests. This was a time when the internet and digital technology was just beginning to emerge. Everyone was talking about how much the way we live was going to change. We became interested in what about as human beings would NOT change. What about us would remain the same no matter how much was changing in the world around us? What was true about us thousands of years ago that will still be true about us thousands of years in the future? It seemed to us there was something about creativity, curiosity and our need for community that would endure. The Blue Man character came about as a way to explore and celebrate those enduring human needs. 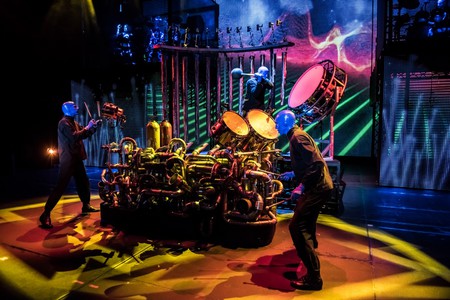 Where does the character of the Blue Man derive from?

It’s funny – we still don’t really know. We still play around with ideas for where he might have come from… but ultimately, we think of him as a kind of alien from within. He is from another world, but perhaps that world is inside of us. Maybe it’s a world we remember – the tribal instincts, the desire to be communal, the sheer joy and wonderment, absolute curiosity about the world. He is very child-like in a sense too.

The truth of choosing the color blue was completely intuitive. It came in a moment of unfiltered inspiration with no intellectual forethought. It just seemed right. It just seemed beautiful. After the fact we can talk about all kinds of reasons why it might work – theatrically it can go in and out of being silly or comic in one moment, then serious or sublime in the next. There have been many pre-industrial tribes in all parts of the world that have painted themselves blue. Blue is the color of water and sky and has no negative ‘baggage’ like many other colors might.

How long does it take to blue-up and what’s used?

The makeup is very gentle and safe; it’s a theatrical grease paint. It never dries, which gave us the feeling that the Blue Man might have just stepped right out of a painting. The most interesting part of the process of getting into the makeup is how transformative it is. Each actor has his own personal rituals, which start with letting go of the events of the day, the topics that engage our ego on a daily level, and relinquishing the social mask we may have been wearing throughout the day. We think of the process as taking off a mask, rather than putting on a mask. Perhaps the blue is what is underneath the societal masks we are all wearing. 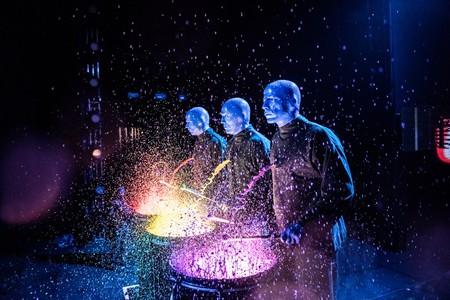 What’s the most unusual ‘instrument’ that has been used in a show?

Blue Man Group is best known for the PVC Instrument: a melodic percussion instrument made with 86 unconnected plumbing pipes of different lengths. The Blue Men play it by striking the ends of the pipes in rhythm with unique paddles made from plastic and foam. The resulting sound is primitive yet also reminiscent of a synthesizer.

What’s been your favorite experimental instrument and why?

My current favorite experimental instrument is one that we recently developed, called the Spin-ulum. It looks like a mixture of a guitar and a fishing rod and reel. It has two long piano strings, tuned to the same pitch. Instead of plucking or strumming the strings as one would on a guitar, there is a 20-centimeter disc with a handle on one side and many plastic cable-ties (zip-ties/tie-wraps) on the other. When the disc is rotated, the cable-ties strike the strings at a fast rate, creating a bubbling whirring sustained sound. To create melodies, there is a fixed metal bar that can slide along the length of the strings, changing the pitch. I like this instrument because it provides the opportunity to create long sustained melodies. The sliding from note to note creates a certain feeling… as opposed to the staccato-sounding PVC instrument with its fixed notes.

In your own opinion, what is it about the Blue Man Group Show – apart from the obvious aesthetics – that sets it apart from other theatrical performances?

I think that there are other shows that are full of spectacle and technology, and there are certainly other shows that appeal to our emotions, but I think that the Blue Man Group show does both. One minute you are enjoying a piece of music accompanied by lights and video, and the next minute you are laughing at the absurdity of our culture, and some of the things we do, because we can see parts of ourselves in the Blue Man character.

I think that when the show really succeeds – it’s because it’s working on various levels at the same time. 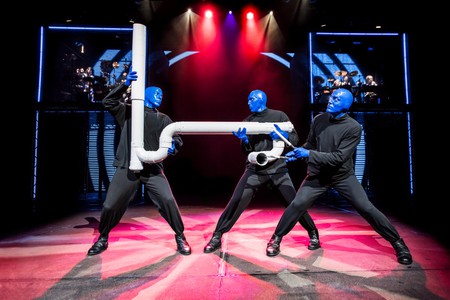 Why do you think the Blue Man Group is perfect for all ages, languages, and cultures?

Well, we often say we think the show is an adult show that kids will enjoy. Because it is the adults who NEED to reconnect with their inner child, their sense of wonder. Children immediately respond to the Blue Man because they identify with him; they’ve never lost their sense of curiosity and joy. So all ages enjoy it, but we think it’s the adults who are in need of reminding…

What music inspires you?

I like music that conveys different moods, from the most intense to the most quiet and contemplative. Lately, I’m inspired by an electronic composer called Lotic. In some ways he is a collage artist, mixing random clicks and bleeps with samples from the real world. Sometimes his music sounds like an angry malfunctioning robot…other times it is calm and ethereal.

What does it take to be a Blue Man?

Besides the obvious things – a uniformity in size and shape, an ability to drum, to act, etc. – I think that being a Blue Man requires an ego-less quality, an innocence, and an innate joy for the world around us.

Courtesy of the Blue Man Group
Give us feedback