Everything You Need To Know About The Hong Kong Egg Tart 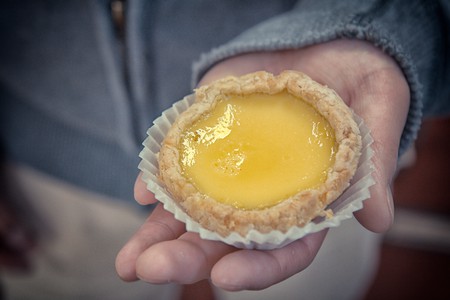 The egg tart is a popular pastry sold in Hong Kong’s bakeries and cafes and is beloved by locals for its flaky crust and sweet, eggy filling. First popularized in the 40s and 50s, the history of this local snack reflects Hong Kong’s unique cultural identity as an East-meets-West melting pot.

The exact origins of the egg tart are unclear and there are several theories as to how they came about. Firstly, the egg tart is often said to be a variation of the English custard tart. Indeed, the Cantonese name for the egg tart, daan tat, comes from the Cantonese word for ‘egg’ and the English word for ‘tart’. But custard tarts call for butter and in the early twentieth-century butter was hard to come by in Hong Kong, leading some to speculate that the egg tart was invented when an innovative chef substituted butter for lard, which was less expensive.

One story goes that the egg tart was invented by a restaurant in Guangzhou in 1927. The pastry’s popularity gave rise to a wealth of imitators, eventually traveling south to Hong Kong in the 40s and 50s, along with a wave of immigrants from mainland China. 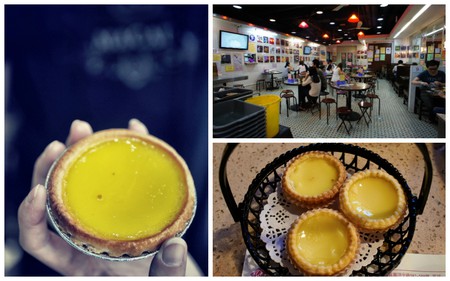 However, others say the egg tart is strongly influenced by the Portuguese pastry, pastel de nata, which came to Hong Kong via neighboring Macau. While the two pastries are similar, Macau’s egg tarts bear a caramelized top layer, unlike Hong Kong-style tarts, which are glossy and smooth on top.

By the early 40s, egg tarts were frequently eaten during afternoon tea among the city’s fashionable elites. After World War II and the Japanese occupation, Hong Kong’s economy suffered as a result of slowing global trade and the civil war in mainland China. Western dining became unaffordable to most people so to fill the void, the first cha chaan tengs began to emerge, bringing affordable, Western-inspired dishes to the common people. Thus, the egg tart was reinvented as a cheap snack for the masses.

To a local, there’s nothing as tempting and delightful as the sight of a batch of golden-yellow egg tarts fresh from the oven. Bakeries and cafes all over Hong Kong sell the iconic treat to this day.