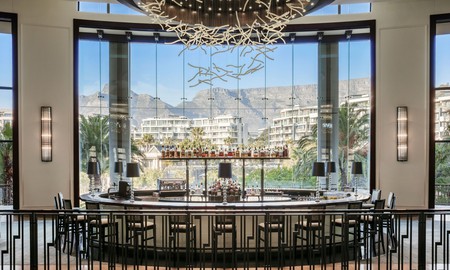 Bordering the Atlantic Ocean on one side and world-class wine country on the other, there’s no surprise Cape Town is the premier destination in South Africa for all things gastronomic.

South Africa aces casual bites from meats charred to perfection on the braai (barbecue) to curry-filled ‘bunny chow’ bread bowls. Yet in cosmopolitan Cape Town, the fare really kicks up a few notches. From Michelin-quality restaurants turning out artful plates to swish cocktail bars and beachside eateries dishing up freshly caught seafood, fabulous – and diverse – cuisine comes as standard in this South African city. Much of the finest food here happens to be served in the hotels, so whether you’re into swish cocktail bars, fine-dining haunts or laid-back breakfasts, you’ll find culinary euphoria at the best Cape Town hotels for foodies. 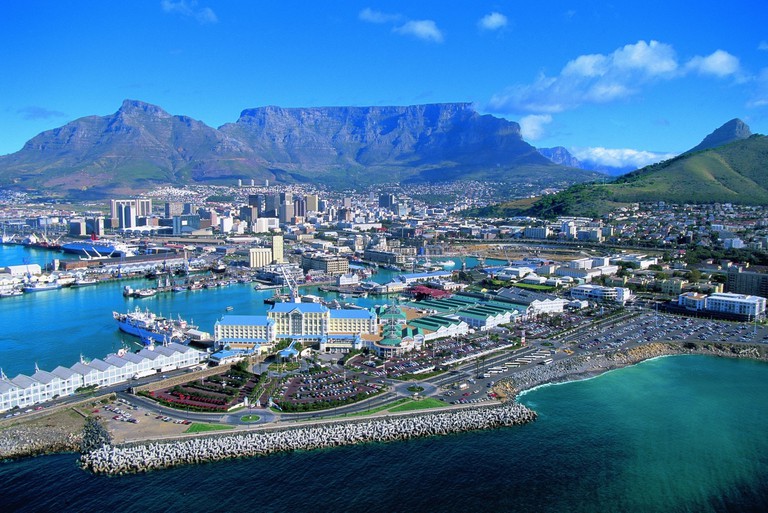 The reason most people book into the Table Bay? The views: stretching out across blue Atlantic waters, framing the postcard-perfect silhouette of landmark, Table Mountain. But while the vistas – and the location, right on the buzzy V&A Waterfront – are prime, it’s not the only draw. Camissa Brasserie dishes up elegant plates with local flair, such as springbok antelope dusted in biltong. The sense of place extends to the dessert list, too; think boozy Amarula milk tart with rooibos tea jelly. 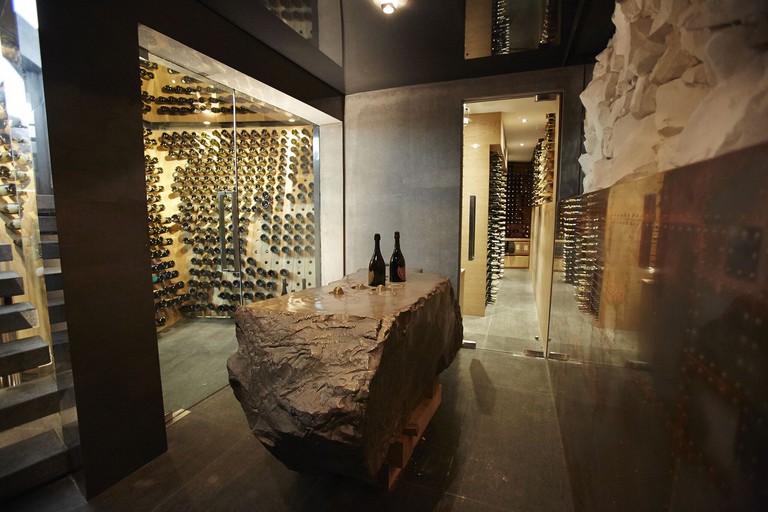 Upmarket Clifton, with swish bars and seafood restaurants, is a well-known haven for foodies. And a stay at Ellerman House kicks it up another notch. Wine is a big factor – 7,500 bottles are at your disposal, many from the finest South African wineries – with a sommelier who leads daily afternoon tastings. The restaurant is a winner too; not just for its Atlantic views but also for its fine-dining plates showcasing the unique produce of the country. Fancy a snack? Stock up on free, freshly baked cakes in the guest pantry. 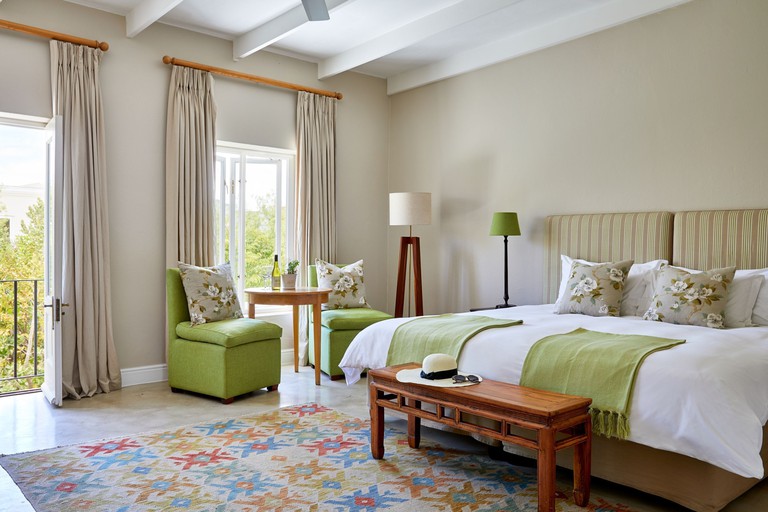 Hugged by vine-carpeted hills in the celebrated wine region of Stellenbosch, east of Cape Town, Spier has a tranquil, rural vibe; that’s not to say it’s rustic, though. Next to the calm Eerste river, it has rooms dressed in elegant garden colours, with beamed ceilings and access to a sun-trap pool and spa. The food? Take your pick from a smokehouse with family-friendly beef brisket; a Sunday harvest buffet with a roast; or a picnic washed down with Spier’s own cabernet sauvignon. 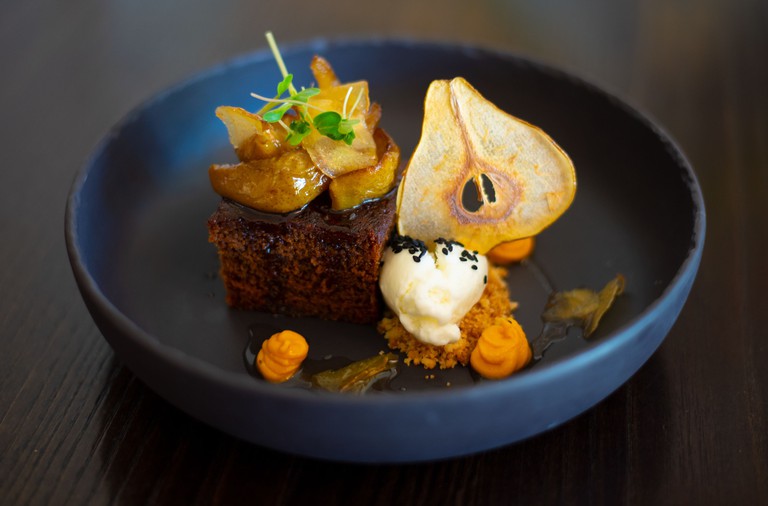 An airport hotel isn’t where you’d normally expect to find a foodie experience, but hear us out. Verde’s Nuovo Restaurant turns out genuinely solid eats, from pan-seared hake with green herb crust to juniper and cacao nib-rubbed local game. It doesn’t have to be gourmet bites, though – after a busy day exploring the Cape Town sights, or ahead of catching an early morning flight, you can enjoy a simple chicken burger or margherita pizza.

The 12 Apostles Hotel and Spa 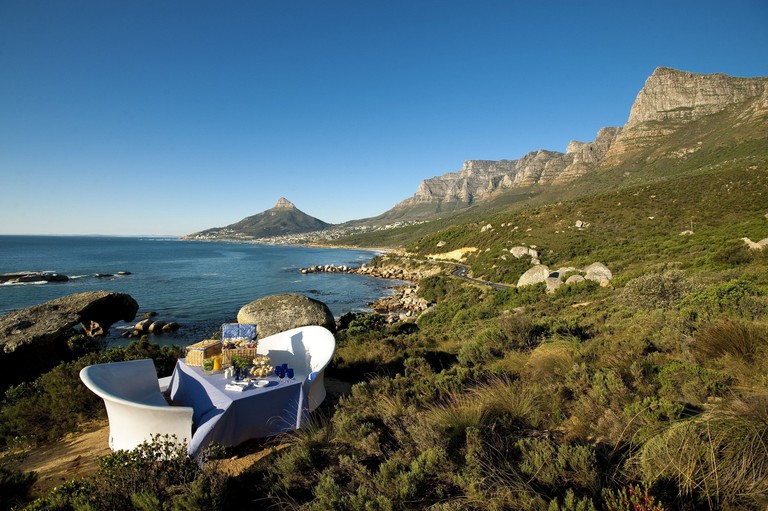 Courtesy of The Twelve Apostles Hotel and Spa / Expedia

Sundowners in the Leopard Bar; gourmet picnics in the fynbos shrubland; a dedicated sushi bar dishing up tuna tataki and prawn tempura rolls – there’s something for every kind of foodie at the 12 Apostles. Even breakfast is given loving attention, with chilled glasses of Cap Classique sparkling wine, washed down with flaky viennoiserie and freshly shucked oysters. As for the rooms, they hold appeal in their own right, with cappuccino colours opening up to terraces with national parks and sea views. 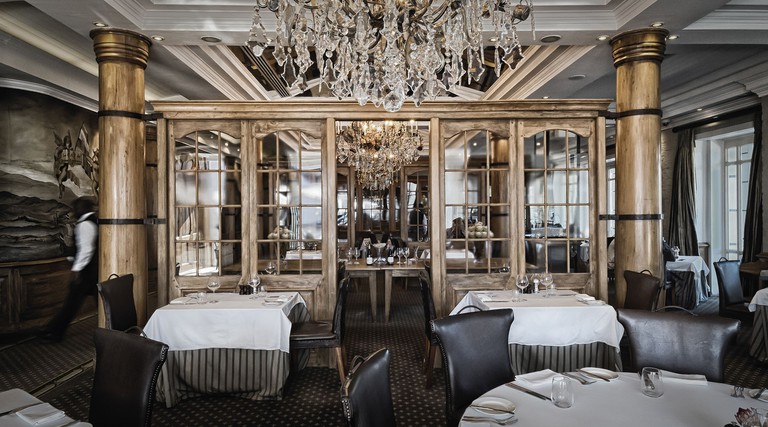 Courtesy of Cape Grace Hotel / Expedia
As one of the most exclusive hotels in Cape Town – the Clintons and Oprah have bedded down here – you’d expect the food to be great at the Cape Grace. The Signal restaurant goes above and beyond expectations, dishing up innovative seafood dishes such as curry risotto with kingklip eel in a serene, swish atmosphere; all-white linens and twinkling chandeliers. Meanwhile, the Bascule Lounge, with cosy brickwork, attracts well-heeled locals seeking a whisky nightcap. 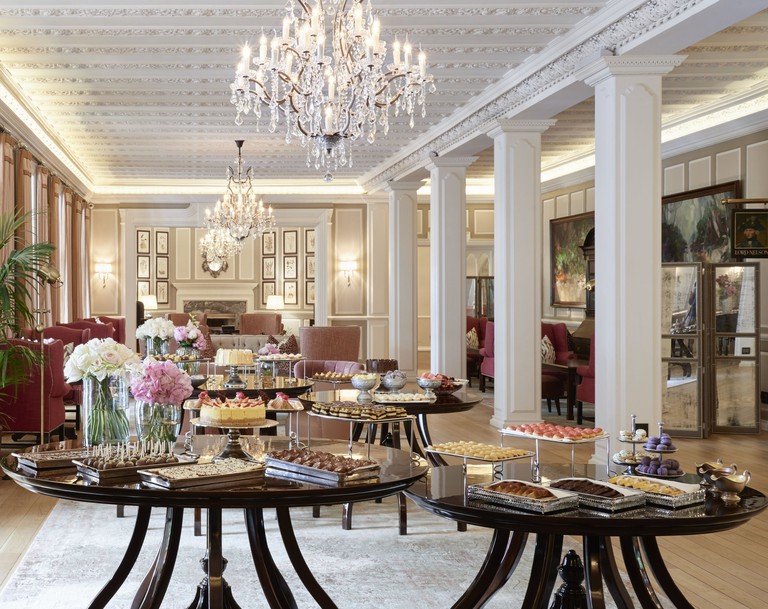 The high tea is legendary: a parade of intricately wrought sweet bites and savoury nibbles served in an airy conservatory space, from which tables spill out onto manicured lawns. But the edible delights at Mount Nelson, one of the oldest and grandest hotels in Cape Town, don’t stop there. Breakfast, enjoyed under the warm sunshine in gardens studded with blooms, is an affair worthy of an entire morning. Come evening, frothy glasses of champagne flow freely in Mount Nelson’s Planet Bar. 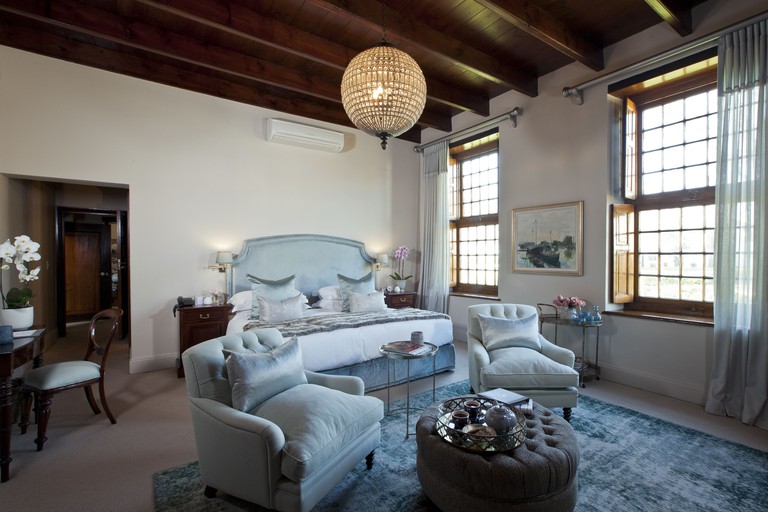 Courtesy of Steenberg Hotel / Expedia
It doesn’t get much better for a foodie than a hotel on a wine estate. This classic South African stay in the wine region of Constantia – featuring white Cape Dutch-style houses and rows of rolling vineyards – has a tasting room, so you can sip elegant sauvignon-semillon blends or sticky-sweet dessert wine 24/7. Book in for a lazy lunch at Bistro Sixteen 82, choosing curried baby calamari with baba ganoush or mushroom and truffle risotto from chef Kerry Kilpin’s eclectic menu. 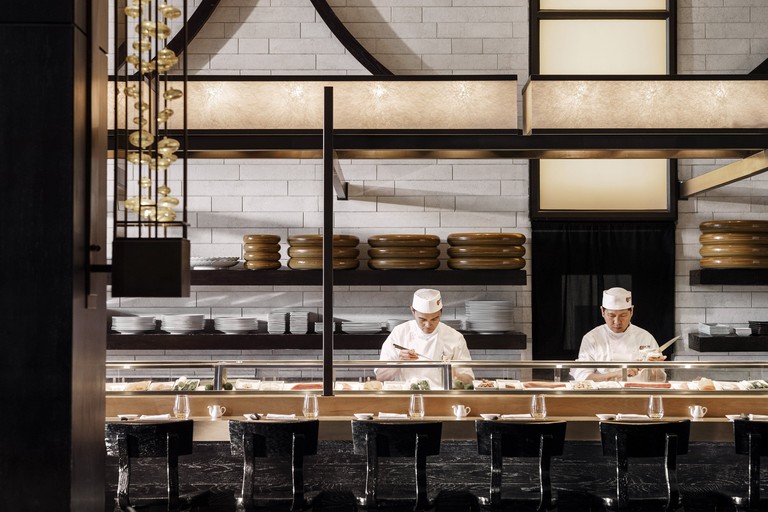 Everything at One & Only is geared up for indulgence: from a decadent spa – set on a dedicated island – to serene pools and classy rooms, the latter fitted with floor-to-ceiling windows overlooking the water. That goes for the dining, too. Aside from hosting the only outpost in Africa of swish sushi brand, Nobu, it has an epic ‘wine studio’ – one of the best-stocked cellars on the continent – and a lobby lounge that’s host to flaky pastries by day and craft cocktails come sundown. 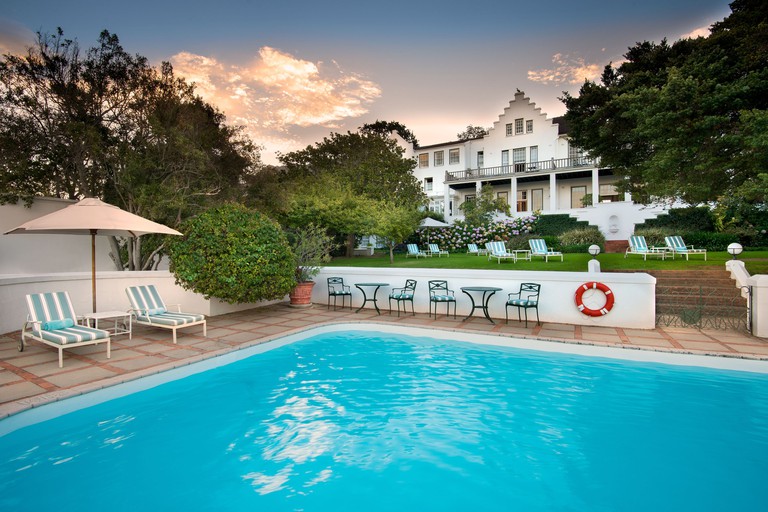 Courtesy of The Cellars-Hohenort Hotel / Expedia

Set in a grand Cape Dutch-style manor, with a roaring fireplace, petite pool and bedrooms with airy terraces, Cellars-Hohenort strikes a balance between elegant and homely. The same goes for the restaurant; an intimate, glass-walled conservatory overlooking camphor trees that turns out casual springbok from the braai. At the Greenhouse – one of the most celebrated restaurants in the country – multi-course tasting menus rule the roost while the Martini Bar serves eye-catching creations, such as a white chocolate and chilli martini.