The City of Otavalo: Between Reason And Magic

Hiding in between the fertile Andean nostalgia, overlooked by the volcanoes, Imbabura and Cotacachi, the colorful textiles of the city of Otavalo. 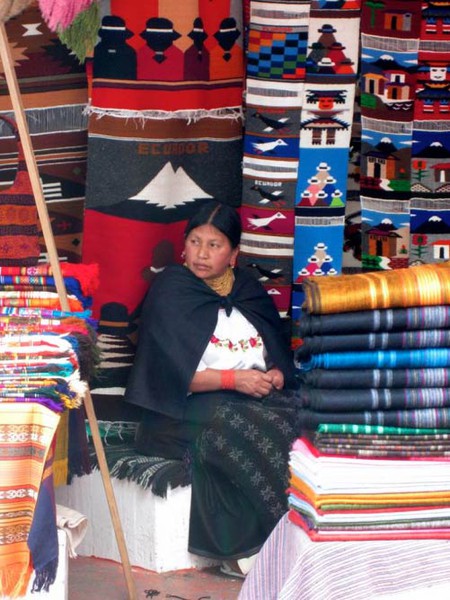 Otavalo saleswoman on a market day | Courtesy of author

Waking up before the sun rises, Julio goes out to work on the minga that the town council has commissioned to fix the road that leads down to the city. Cars will soon pass by. With the hoe in his hand he works for the next hour. As the sun appears in east he thinks that the best places in the market have probably already been taken.

He returns home and feeds the chicken with grains of corn while his wife, Maria, cooks potato tortillas for the three kids. His two oldest children leave to school, while his wife ties the 2-year-old in a green sheet on her back. It combines well with her blue anaco, an embroidered blouse, a golden necklace and her single black braid falling down her back. He wears his espadrilles, white pants, a blue poncho, a hat on his hair worn in a similar black braid.

Julio uses public transport, a small bus that rolls peacefully down the mountain, sometimes shutting down its engine to save gas, a move that endangers passengers. After an hour, he arrives to the warehouse where he keeps the textiles. He packs them into a bag twice his size, and heads to the centennial Plaza de los Ponchos, the largest outdoor indigenous market in South America, whose current design was crafted by the Dutch artist Rikkert Wijk in 1971. Once inside, he notices the familiar array of alpaca sweaters and socks with animal and symmetric patterns, wool pants of every inconceivable color, paintings and tapestries depicting the triangular ponchos and hats worn by anonymous figures, jewelry and handicrafts, the Andean charango and quena that imitates the sound of the wind. Some are handmade and others are cheaper imitations of folkloric paraphernalia and motifs. 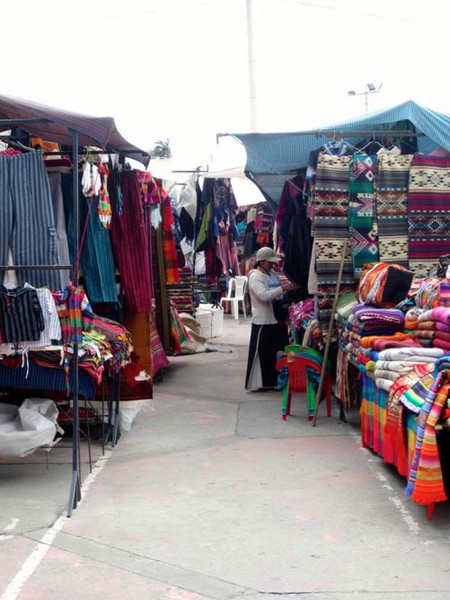 With his stand open, the first American tourists arrive. This haggling event will become a multilingual experience. Americans will speak in a broken Spanish, to which the Otavalo will answer in a more fluent English. The dialogue will continue in both languages. An agreement is close to being made, but then Julio turns to Maria and asks in Quichua what she thinks of the price. The American tourists have to wait for an agreement, if Maria doesn’t approve, more haggling will be done. The American tourist may have overpaid, who knows, but he will leave with the sensation that he did not just buy a textile, but an entire folkloric experience.

The story of Otavalo is a coincidence of historical events. Their plight is similar to the plight of Indians throughout Latin America, trying to maintain and reclaim their own culture since the Inca expansion to northern South America. The Inca method of conquest included relocating and fragmenting the conquered people to prevent any organized uprisings. Nevertheless, they were impressed with the Otavalo technique of manufacturing textiles and put them to weave for the royalty. Later, during the era of Spanish colonialism, Otavalo became a textile producing obraje. Despite succumbing to foreign rule, they managed to maintain the community unity and recreate their identity around textile manufacturing. 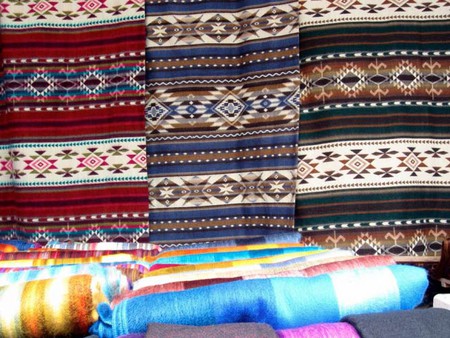 The establishment of independence in 1821 only accelerated the transformation. A mixture of external forces and domestic agency kept reshaping the identity and subsistence of Otavalo. With the Industrial Revolution, Britain created a monopoly over the trade in wool and cotton, and produced cheaply. This monopoly lasted until the First World War when British exports were blocked by German U-boats. This incentivized further development of the local textile industry, but it was also possible due to the American Peace Corps that encouraged textile production in the 1960s and the UN-sponsored mission through which Dutch artist Jan Schroeder taught interlocking tapestry to communities in the mountains in 1954. Finally, the building of the Pan-American highway placed Otavalo on the map.

The question is then, how genuine are Otavalo products and culture? Nowadays, the people of Otavalos can be merchants or farmers, rich or poor, may have never left the city or have travelled worldwide. Nevertheless, their continual ritual existence, anywhere where they are in the world, has fixed their identity somewhere between the magical and the rational. Besides the material symbols of identity and their language, they embrace both Catholicism and traditional legends, celebrating Christmas and Inti Raymi as community events. These traditions of feasting and dance become spaces of dialogue where the identity of the Otavalo is discussed and critiqued. Despite differences and inequalities, by engaging in such dialogue, they develop bonds of belonging. 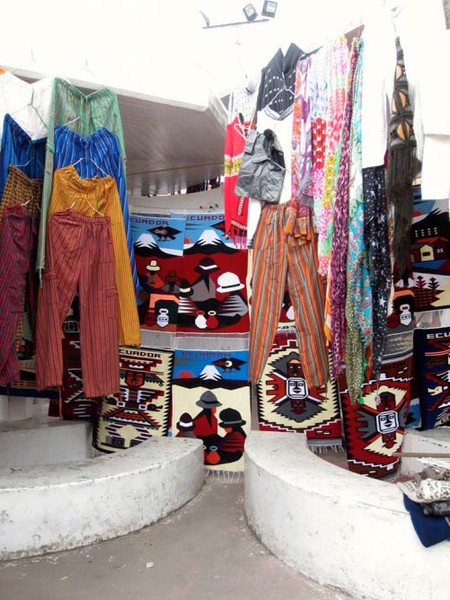 One traditional legend tells of a drought that hit the region. The elders demanded that a young and beautiful virgin had to be sacrificed to the god of the volcano. Nina Paccha was chosen, but her lover Guatalqui preferred to run away with her. They were persecuted and as they ran Taita Imbabura turned the woman into a lake and Guatalqui into a lechero tree, while from the sky drops started falling, marking the end of the drought.

In Otavalo worldview, this story is as real as the market economy they live in. This is evidence of the constant negotiation between oral memory and immediate material surroundings; a negotiation which has entered a new stage in the era of information and the tension between tradition and westernization. The objective is for a communal belonging drawing a sense of individuality while remaining Otavaleno.