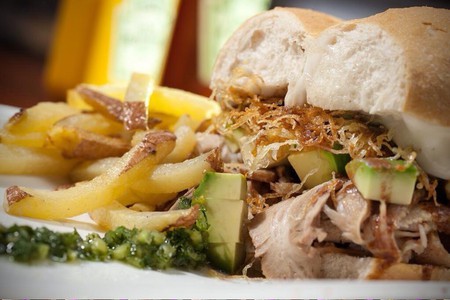 Chile’s loaded meat sandwiches are a messy food tradition universally treasured by both locals and foreigners, barring a few vegetarians, of course. A happy Chilean has a knife and fork in hand, a massive “sánguche” on their plate and cold draft beer to help wash it down. A trip to Chile cannot go without a taste of these massive meat-filled delights. Besides being a staple of Chilean cuisine, these sandwiches are easy to order on-the-go and widely available, making them the ideal meal for visiting sightseers.

Each Latin American country does churrasco a little differently. In Chile, it’s thinly-cut steak that’s grilled and served on fresh-baked bread. Many Chileans love a good churrasco italiano, with gobs of mayo, chopped tomato and a healthy serving of mushed avocado. Chileans are quite fond of their avocado, referred to locally as “palta.” It’s a preferred topping for Chilean sandwiches and a staple of Chilean cuisine. Besides the churrasco italiano, the churrasco a lo pobre is also quite popular – churrasco served with a fried egg, caramelized onions and french fries. 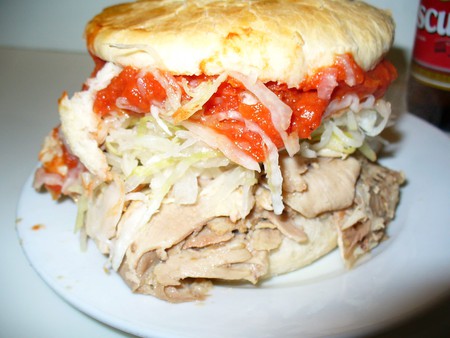 This delicious pork sandwich is an absolute must during a visit to Chile. Lomito is thinly sliced pork loin, which has been slow-braised and is served on top of fresh Chilean “pan frica” bun. Order the lomito “completo,” “italiano,” or pick toppings of your own.

Named after the former Chilean president, this simple sandwich came about after president Ramón Barros Luco would regularly order his churrasco with cheese on top. Despite there not being much to this sandwich, the fresh bread, savory meat and melted cheese make it a local favorite. Similar to the Barros Luco sandwich, there’s also the Barros Jarpa, which includes ham instead of beef. This sandwich is named after Senator Ernesto Barros Jarpa.

What makes this sandwich unique is its green beans topping with spicy green ají peppers on top. It also includes typical churrasco-style slices of steak and sliced tomato. Since it includes beans, meat and bread, the sandwich is not as unhealthy of a choice as other Chilean sandwiches, covering three main food groups. A unique and delicious sandwich, the Chacarero was named one of the 13 best sandwiches in the world by Time magazine in 2014.

A trip to Chile isn’t complete without a taste of the completo, the Chileans’ take on the hot dog. Using fresh buns and sausage, Chileans add on sauerkraut, chopped tomatoes and a shockingly large portion of mayonnaise on their dogs.

Chilean sandwich shops can be found all throughout the country. Keep an eye out for restaurants with the names “fuente“, “schopería” or “quick lunch”, which are sure to serve up a variety of sandwiches. The best place to go in Santiago by far is Fuente Alemana, where Anthony Bourdain fell in love with the mouthwatering lomito sandwich. This historic Santiago restaurant has two locations in the metropolitan area, though the original is located in Santiago Centro on Alameda Street (also called Av. Libertador Bernardo O’Higgins) and has been around for over 60 years. Fuente Mardoqueo in Barrio Yungay also comes highly recommended, offering massive sandwiches and a cool, historic vibe inside.