Welcome to Brazil’s ‘Juventus’: The Local Italian Club at the Heart of São Paulo Soccer 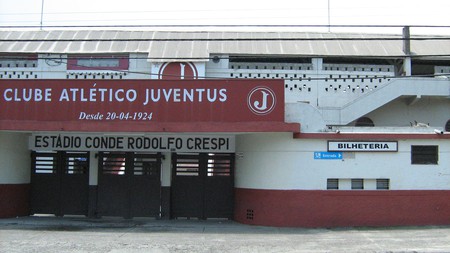 Saying Brazil is a soccer country would be an understatement. Bars, restaurants, bakeries and even police stations in this country of 200 million people have their TVs constantly tuned to live games or, failing that, afternoon soccer panel shows. During the World Cup, the nation comes to a standstill. Try catching a bus while Brazil is playing and you’ll understand how important the sport is in the country.

Because soccer is so well loved around the country, Brazil’s biggest clubs have lost a lot of their regional identity, instead becoming national institutions. The most popular team, Rio de Janeiro’s Flamengo, boasts a fan base in the tens of millions. As a result, local soccer culture, the likes of which can be seen all over Europe, has almost completely died out in Brazil. However, in the east of São Paulo, there is one team which has managed to maintain this tradition. Meet Juventus.

In a country where glory and trophies mean everything, and where lower league soccer is largely ignored, Juventus exists as an anomaly. Even though they are not even big enough to play in the national championship, Juventus manage to attract thousands of fans to watch every one of their home games at their charming Rua Javari stadium, where they often play against opponents whose support base can be counted on two hands.

Clube Atlético Juventus was founded in 1924 in São Paulo by a group of factory workers from the predominantly Italian neighborhood of Mooca. The team was named after Juventus, Italy’s biggest soccer club, and though they originally used their namesake’s iconic black-and-white striped jerseys, they later changed them to maroon shirts and white shorts, the colors of Juventus’s rivals, Torino F.C.

The amazing popularity and longevity of the club can be explained in part by the culture of São Paulo, and particularly that of Juventus’s home neighborhood of Mooca. São Paulo is a staggeringly cosmopolitan city, made up of millions of inhabitants with dozens of different cultures and ethnic backgrounds. As such, there is so much variation between the different neighborhoods of the city: landscapes change, designs change, food changes, and even the accent changes.

Mooca was largely populated by Italian immigrants who came to work at the Crespi Weaving Mill, which still stands today. As a way of preserving their culture, Mooca retained a staunchly Italian identity, and even today the locals speak a São Paulo dialect which uses Italian words and inflections. Juventus was created – and maintained – to be a symbol of Mooca, one of the city’s most idiosyncratic neighborhoods.

Another reason for Juventus’s popularity is their fan culture. In the face of the sanitized, globalized soccer found around the world, with its comfortable, all-seater stadiums, gaudy pop music blasting over the speakers during halftime and generally stale and inoffensive atmosphere, Juventus fans aim to maintain the soccer traditions of decades past. During every game at the Rua Javari stadium, behind one of the goals, a large maroon banner is hung which reads “Ódio Eterno ao Futebol Moderno” – Eternal Hatred of Modern Football.

During a game at the Rua Javari – Juventus’s 4,000-capacity stadium which has stood, largely unchanged, since 1929 – fans watch the game standing up, singing and chanting throughout the 90-minute game, accompanied by drums and decorated with flags, banners, streamers, flares, and the occasional umbrella – items which are almost completely forbidden in other São Paulo soccer stadiums.

Fans sitting behind the goals spend the entire game winding up the opposition goalkeeper with plenty of colorful and creative insults. If you’ve ever wanted to learn how to curse in Brazilian-Portuguese, an afternoon at the Rua Javari would serve as an effective crash course.

At halftime, supporters form large queues close to the stadium’s entrance for the traditional Juventus snack, Seu Antônio’s delicious cannoli. For almost 50 years, Antônio has sold his sweet Italian pastries at the Rua Javari. His method is slightly different from the traditional Sicilian recipe, making the pastry with cachaça – Brazil’s national spirit made from sugarcane juice – and filling each cannolo generously with pastry cream (like a custard) or chocolate, instead of the classic ricotta or vanilla cream used in Italy.

Everything about watching Juventus at the Rua Javari feels like a trip back in time, and you can feel the history in the stadium’s creaking stands. Pelé, the greatest soccer player of all-time, famously claims he scored his best ever goal at the Rua Javari, against Juventus, in 1959. As there were no television cameras present, there is no footage of the goal, but according to Pelé (a version corroborated by his team-mates and opponents from the game), he received the ball in the penalty box and proceeded to lift it over the heads of three defenders in turn, before doing the same to the Juventus goalkeeper and scoring the goal with his head. Sitting on the steps of the Rua Javari, if you close your eyes, you can almost picture it.

Juventus were once one of the principal clubs in São Paulo, playing in the top division of state soccer for the best part of 50 years. They were nicknamed the “Moleque Travesso” (The Naughty Boys) throughout this time, as they had a knack of defeating their “bigger brothers” Corinthians, Palmeiras, São Paulo, and Santos in important games.

In the 1980s and ’90s, as the money in Brazilian soccer became heavily concentrated in the top league and among the biggest clubs, Juventus began to slide down the divisions, no longer able to compete with their much wealthier rivals. They no longer had the resources to play in the national championship and were restricted to competing in the lower tiers of the São Paulo state leagues, where they find themselves today. This did not keep the fans away, however, as Juventus have always valued the identity and integrity of their club above commercial success. While Mooca has become a more middle-class and gentrified neighborhood, the Naughty Boys have refused to follow suit, making them unique in Brazilian soccer.