Lagoa in Rio |public domain
Rio de Janeiro is home to forest-covered mountains, a vibrant metropolitan, picture-perfect beaches and a constant musical drift of samba. Relax and soak in this complex yet wonderfully chilled atmosphere whilst savoring a picnic in Rio’s great outdoors. The outdoor living culture of the city and constantly sunny, warm weather affords it unbeatable picnic spots — we’ve rounded up some of our favorite locations for a picnic to remember.

One of the most picturesque areas in the city, Lagoa Rodrigo de Freitas (usually just known as Lagoa) is a natural lake in the south zone of the city, encircled by a 7.2-kilometer cycle path with large patches of picnic-perfect grass. On weekends, Lagoa becomes a picnic hotspot, with large groups of friends and families settling down for an afternoon of food, drinks and conversation, often decorating their chosen area with delicate chains and colorful cushions. One of the best spots in Lagoa for a picnic is near Palaphita Kitch where there are large, open grass spaces and the chance to spot wild capybaras. Prepare in advance by going to the supermarket or bakery beforehand to get provisions. There is a Zona Sul supermarket nearby that sells various types of fresh bread, fruits, cheeses, wines, cakes, biscuits and hams. It is one of the best supermarkets in Rio and also sells plastic cups, plates and other picnic essentials.

Once a popular tourist spot, Ilha de Paquetá in Guaranbara Bay remains a calm place to escape city life and enjoy a pleasant afternoon. Its modest beaches and colonial architect preserve a historical charm, while its unassuming nature is furthered enhanced by old-school methods of transport, such as walking, horse-drawn carriages or bikes, as there are no cars on the island. The beaches are an ideal, quiet spot for a picnic and are accessible by taking a boat from Praça XV (Quinze) in Centro. Provisions are best made in the city center before heading over to the island. Head to nearby Confeitaria Colombo for a gourmet selection of pastries, chocolates and Brazilian salgadinhos (snacks) to take away. Drinks can be bought on the island as take aways from the few little bars there.

The public wall in front of Bar Urca attracts hoards of people each weekend that buy drinks and snacks from the bar before taking them over to the wall that overlooks Guanabara Bay. Just around the corner from Bar Urca is a padaria (Brazilian bakery) that serves simple cakes, breads, cheeses and hams. Stock up on some snacks here before heading over to the wall next to Bar Urca to enjoy the chilled atmosphere and lively chattering from the casual crowd that gathers there. Keep the beers flowing by trips to Bar Urca and be sure to take away a few of their famous handful-sized pies; the prawn or cheese ones come highly recommended.

With views that overlook Guanabara Bay and Sugarloaf Mountain, Flamengo Park offers a wonderful spot for a picnic with an unbeatable backdrop. The park is huge, spreading all the way from Rio’s city center through Glória, Catete and Flamengo, before finishing just before Botafogo. The large green areas grant ample space for cyclists, skateboarders, yoga-enthusiasts and football while the direct proximity to Flamengo beach is perfect for volleyball. Pick any spot that takes your fancy on the grass, settle down with a picnic and take part in a bit of people-watching; there is plenty to see. It’s best to get provisions at the Zona Sul supermarket beforehand, which is just 10 minutes away from the park. Beers, caipirinhas or chilled coconuts can be bought from the vendors in the park or on the beach. 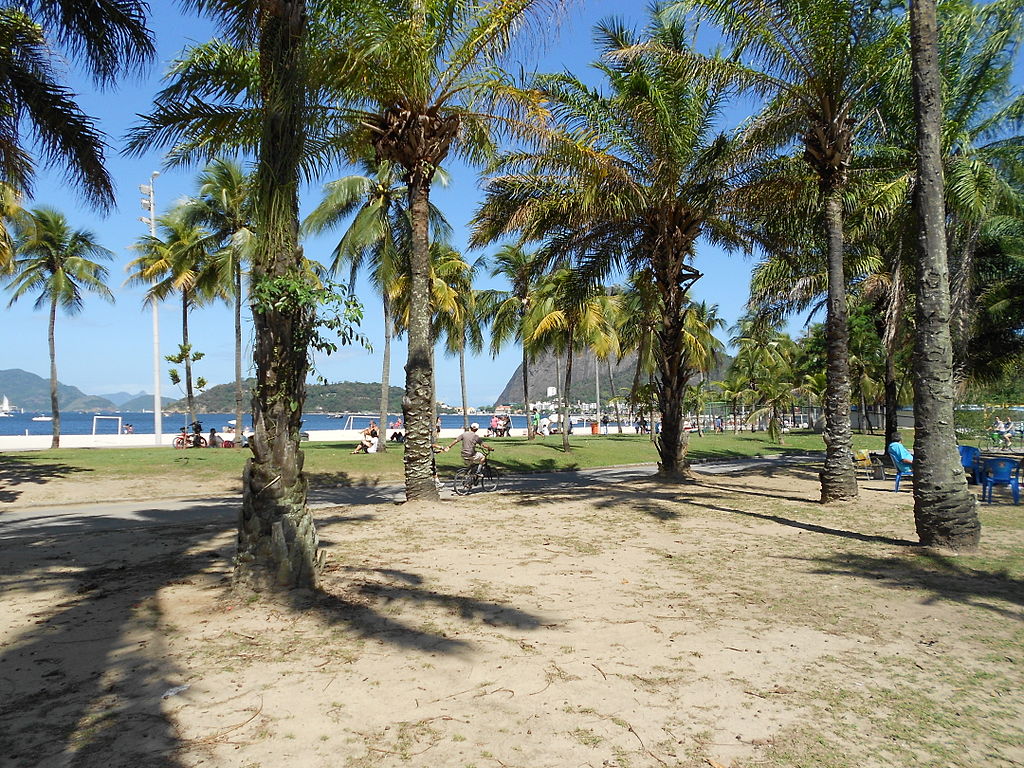 The quieter neighbor to Copacabana, Leme is the preferred beach for families and older Rio residents, which makes it a calmer place for a picnic spot. The waves are much stronger at this end of the beach that provide a dramatic visual and audio backdrop for a light lunch on the sandy shores. Get beers, caipirinhas, water or chilled coconuts from beach vendors or from the makeshift kiosks on the sand that sell chairs and beach umbrellas, too. Stock up on food at the Pão de Açúcar supermarket nearby that sells various breads, cheeses, fruits, meats and picnic essentials such as cups and plates.

One of the best places in Rio de Janeiro is Arpoador, a rocky point that juts out into the sea at the far end of Ipanema. During the day it’s a surfers paradise thanks to the crystal-clear waters and the small yet perfectly-formed waves that come in. During the evening, fishermen come out to round up the day’s catch as the sun sets across the ocean behind the Two Brothers Peaks. This is the best time to go for a picnic and watch the sun go down to the sound of appreciative applause from the people gathered on the rock. Head to the nearby Zona Sul supermarket to stock up on food and wine for a classic after-dark picnic.