How To Eat And Drink Like A Local In Brazil 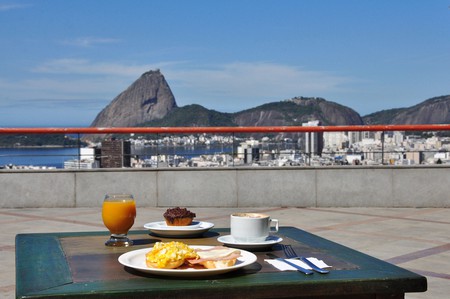 Eating and drinking in Brazil are as much socializing activities as they are necessities. Food such as beans and rice are Brazilian staples and are consumed almost every day. The daily food routine includes three main meals and snacks in between, with lunch and dinner considered the times to socialize, relax and savor wholesome, traditional food.

Breakfast, known as café da manhã (morning coffee), is the most practical meal of the day in Brazil. It is generally eaten between 6 a.m. and 8:30 a.m., depending on what time school or work starts. Although breakfast is considered important in Brazil (few Brazilians would start the day without it), it is a meal of pure necessity rather than a social event. The most important drink is coffee which is usually enjoyed either black with plenty of sugar, as a pingado (strong with a dash of milk) or média which is half coffee, half heated-up milk. For those who don’t like coffee, chocolate powder with milk is common for both adults and children, or fruit juices, especially orange or guave.

For food, the most typical is pão francês (French bread) which is toasted with butter and sometimes eaten with white cheese and ham. Other breakfast options include a simple, unfrosted orange or corn cake, granola or pão de queijo (cheese bread). Breakfast is eaten at home before leaving for work or school, or sometimes at the counter at the local padaria (bakery).

Lunch is one of the most important meals of the day in terms of socializing and relaxing. Around midday or 1 p.m., hoards of workers leave the office and enjoy an hour long lunch whilst casually chatting about anything and everything. The most common places for lunch is per-kilo restaurants that serve a wide variety of food options that is priced on how much your plate weighs after selecting what you want. Usually, people eat beans, rice, meat or fish and a selection of salad and vegetables. Lunch is followed by a simple dessert such as pudim (like a flan) and almost always by a shot of espresso with plenty of sugar. It is also common to have a little shot of caipirinha before starting lunch, just to increase the appetite. 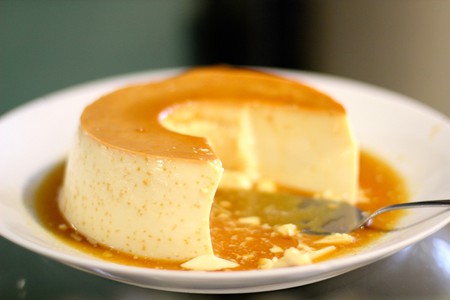 Business lunches are an important part of building client relationships. They are often much longer than one hour with no time pressure and an intent of creating a friendly and relaxed environment. It is common to have an important meeting at 10:30 a.m. or 11 a.m., followed by the a business lunch after. One of the most popular places to have a business lunch is at a churrascaria (Brazilian all-you-can-eat steakhouse) where the waiters serve several cuts of meat on skewers at the table in addition to the large and diverse salad bar. During the lunch, it is more common to chat informally about life, football, culture and travel; business comes later. 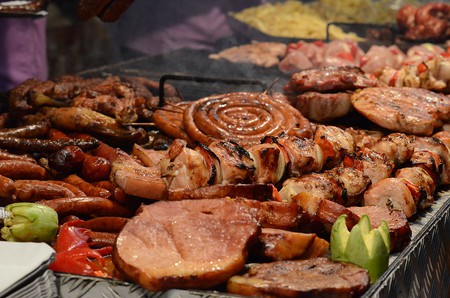 There are certain eating etiquettes in Brazil. At the lunch or dinner table, it’s polite to wait until everyone has been served before starting to eat. Food, such as bread, should be eaten with a napkin — Brazilians will rarely touch food with their hands and when a knife and fork can’t do the job, a napkin is used instead. Smoking at the table whilst eating is a big no-no, as is using a toothpick in front of other diners.

Brazilians will usually snack later in the day at about 3 p.m. and again at 6 p.m. on the way home from work. The most common snacks are cereal bars, packets of milk biscuits or sweet popcorn that is sold in little makeshift stalls on the streets. Other popular snacks include salgadinhos, which are savory pastries and breads, such as cheese breads or coxinhas (deep-fried dough with shredded chicken inside). Another refreshing snack, especially in the summer, is acai with granola or banana.

During the week, dinner tends to be a family event with the family eating together, or at least eating at the same time — teenagers in the family may take their food to eat in their rooms. Dinner usually has rice and beans and is served with meat, stroganoff, lasagna, or pizza. It is a wholesome meal eaten around 7 p.m. or 8 p.m., and will be the last meal of the day. 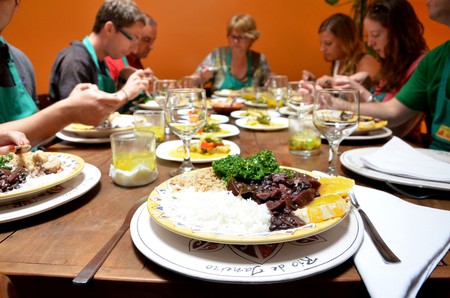 Sometimes, Brazilians will go out to enjoy happy hour after work when the drinks are on promotion, usually until 8 p.m. or 9 p.m. This is the time for work colleagues to socialize outside of work, destress after a tense day or just simply to enjoy a chilled beer in the hot weather. The most popular drink to have during happy hour is not in fact caipirinha, which is more common among tourists, but a chopp (cold beer served in a small glass) or bottle beers of 600 milliliters served amongst the group. When drinking, Brazilians will usually snack on something such as pastels, empadas (pies) or a portion to be shared such as apim (roasted cassava), dried meat, salami, croquettes or fried chicken strips.