How To Celebrate Rio Carnival 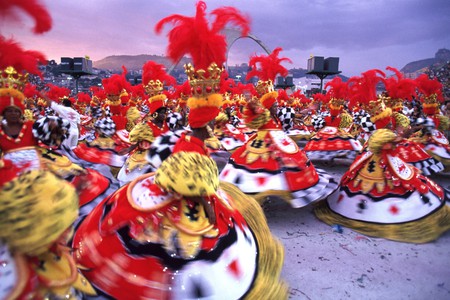 There is no party on earth quite like Carnival in Rio de Janeiro – a party so raucous that it has come to define the image of Brazil around the world. Culture Trip takes a look at the customs, culture and things you need to know to live it up at Carnival like a local.

In the months of February and March, a ripple of party fever spreads throughout Rio de Janeiro for Carnival. Carnival in Rio is Brazil’s largest celebration and the world’s biggest festival. It draws in people from all over the globe, connected by the unifying beats of the steel bass drums. Here’s the lowdown on the best ways to celebrate Carnival in Rio.

Parades at the Sambódromo

The Sambódromo (or Sambadrome) is an open-air venue where the main Carnival events take place. The space is like an enormous, flamboyant runway flanked on either side by stadium seating from which spectators watch the extravagant parades go by. Huge floats with various themes amble along, with thousands of visitors on either side, celebrating, dancing and cheering in the stands. The air is full of the heavy beats of steel drums and fast-paced samba rhythms, which are met with a flurry of legs from the smiling, bedazzled samba dancers. The climax of the event is on Shrove Tuesday (also known as Fat Tuesday), though the parades begin on the previous Saturday.

Behind the parades are 14 of the best samba schools in Rio. They train for months so that they can give their very best performance. All have the same underlying goal: to win over the judges and earn themselves the title prize and the most admiration. Though many of the schools are at the forefront of the samba scene, with rehearsals and planning taken very seriously, some welcome visitors to participate in the parades alongside their best dancers.

Each school picks a theme, which is expressed through their performance and their elaborate costumes. Between 200 and 400 drummers help by beating a quick, hypnotic rhythm that seduces the crowds and draws them into the compelling scene. The spirit of Carnival is alive at these parades, and witnessing it is a once-in-a-lifetime experience.

To get to the Sambódromo, take a taxi or a shuttle bus directly from your hotel to the entrance. Bear in mind that during Carnival, there are dozens of street parties with tens of thousands of people taking part, so factor in major traffic delays if you use the roads. The easiest way of getting to the Sambódromo is to take the metro to Praça Onze and walk for about 15 minutes from here. It’s well signposted and you can enjoy some of the street celebrations along the way.

Outside the Sambódromo, Rio comes to a halt for a week as the city’s streets fill up with dozens of daily parties that are a key feature of Carnival. The parties become a test of stamina and endurance as each day sees more drinking, more dancing and more fun than the last. Known as blocos in Portuguese, the street celebrations are led by moving vans or floats that trail slowly along, with samba music filling the air. Street vendors weave in between the sweating bodies selling refreshing frozen vodka tubes and ice-cold cans of beer. Costumes are a must, and while some blocos have themes, really, any costume goes. Popular choices include police officer, cowgirl, sailor and pirate – or just plenty of glitter and brightly colored clothes. Temperatures can reach over 104F (40C), so layers are best left at home.

The Cordão da Bola Preta is one of the biggest and most popular blocos based on the traditional roda de samba (samba band performance) in Rio. It’s held in the city center and attracts around 1m people. The typical colors of this bloco are black and white polkadots, and thousands of partygoers dress up to match the theme.

The full program is released close to the first day of Carnival, so check with your hostel or hotel to get the full schedule. The best blocos tend to be in Leblon, Ipanema and Copacabana, as being in a packed crowd of thousands of people in the middle of Brazil’s summer will make you appreciate the sea breeze more than ever before. There are smaller ones in Gávea and Botafogo, and they’re still loads of fun. Some of the most laid-back celebrations take place in Santa Teresa, while Centro has the space for Rio’s largest and most intense blocos, with after-parties in Lapa. However, often it’s enough to just go out onto the streets – the blocos will find you.

The Carnival balls are large events held at certain venues throughout the city. In true Carnival style, the balls are glitzy, outrageous and daring, reimagining the limits of a standard night out and promising an unforgettable party. From masked balls at the glamorous Copacabana Palace to outlandish antics at the Gay Costume Ball, these parties command the most extravagant costumes and the most fun-loving crowds. The music played at the balls can lean away from the samba that is filling the streets and towards an international music scene, providing a whole additional layer to Carnival.