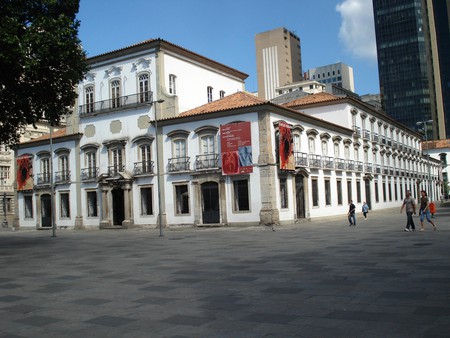 The Paço Imperial (Imperial Palace) is one of the most historically important and significant buildings in Rio de Janeiro. Located in the city center, it has witnessed centuries of history unfold before it. Once a grand residence for the king, it was later converted into a lowly mail office. Nowadays, it’s a cultural center that captures its importance in the history and culture of Brazil.

The Imperial Palace has previously been known as the Royal Palace of Rio de Janeiro and the Palace of the Viceroys and stands in the city center next to Praça XV, a square which is known nowadays for being a host on the weekends for live music and street parties. However, in the 18th century, it was a part of the larger residence for the governors of colonial Brazil.

It was the military engineer José Fernandes Pinto Alpoim who was the architect for this impressive building. If he were alive now he could point to several significant structures in Rio and proclaim accountability for them; he was the architect for the Carioca Aqueduct, Convent in Santa Teresa, Arco de Teles, and the church of Nossa Senhora da Conceição, among others.

The Imperial Palace was designed and built in a simple baroque style, rather similar to the contemporary Portuguese manor houses of today. The palace has a baroque portal that’s made from Portuguese marble, giving it a touch of regal grandeur. It also has several inner courtyards and a stairway leading up to reach the upper storeys. The area beside the palace, Praça XV, was remodeled, also by Pinto Alpoim, to include a marble fountain that was brought over from Lisbon.

In 1808, it served as the royal residence of King John VI of Portugal. He made this palace his residence when he fled Portugal as Napoleon’s army invaded. During this time, a throne room was added to the palace on the second floor where the traditional hand-kissing could take place.

In 1822, the palace became the administrative base of Emperors Pedro I and Pedro II. It was during a period of about 150 years, between 1743 and 1889, that the Imperial Palace was one of the main political centers in Brazil.

The palace served an important part in some of the most important historical events in the history of Brazil. It was at the Imperial Palace that Pedro I declared that he would refuse Portuguese orders and would continue in an independent Brazil. It was also at the Imperial Palace that Princess Isabel, Pedro II’s daughter, signed an immensely important document, the Lei Áurea, which banned all slavery in Brazil.

Despite all this historical significance, incredibly it lost its prestige in 1889 and all its wonderful interior decorations were stripped down when it was turned into a central mail office for Rio de Janeiro. In 1980 it was restored to its former glory with the interior replicated to how it was in the 19th century, with the help of a large catalog of pictures and photos of the original decoration. Nowadays, it’s a cultural center for Rio that hosts various temporary art exhibitions of paintings, sculptures, photos, cinema and music. It also houses the Paulo Santos library which specializes in art, architecture and engineering, as well as protecting a collection of valuable books from between the 16th and 18th centuries.