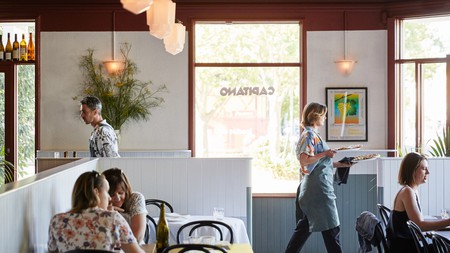 Discover the best Italian restaurants in Melbourne through one of its own, Capitano | Courtesy of Capitano Melbourne

In the wake of World War II, tens of thousands of migrants moved from the Mediterranean to Melbourne, Australia. And so began this city’s obsession with Italian cuisine.

“[Post-war immigrants] brought parmesan cheese and olive oil and espresso machines to Australia, so that kicked it off,” says Darren Leaney, venue manager of acclaimed Carlton eatery Capitano. “And that’s been part of our culture for 70, 80 years now… food and drink is so central to those cultures that have made Melbourne home.”

These post-war trailblazers turned Carlton’s Lygon Street into Melbourne’s Little Italy. And although these old-school pizza and pasta joints still cater to tourists and bargain-hunting uni students, a more contemporary collection of Italian restaurants has blossomed in recent years. The secret ingredient? A wave of chefs who learnt to cook with their nonnas, then cut their teeth in some of the world’s most celebrated kitchens.

“Chefs, who have already got this heritage and history through their family, go and learn incredibly refined skills at fine-dining establishments. Then they find this way of translating what they learnt in their parent’s kitchen into what they learnt in professional kitchens. And what you get on the plate is humble and rustic-looking food, that’s also incredibly refined and full of flavour.

“It’s also this incredibly Italian attitude – Italian chefs’ big thing is locality and seasonality. They embrace this incredible produce that grows in and around Melbourne, and using local ingredients in their own cuisine.”

So where does Leaney go for an Italian meal in Melbourne? He revealed some of his favourites to Culture Trip. 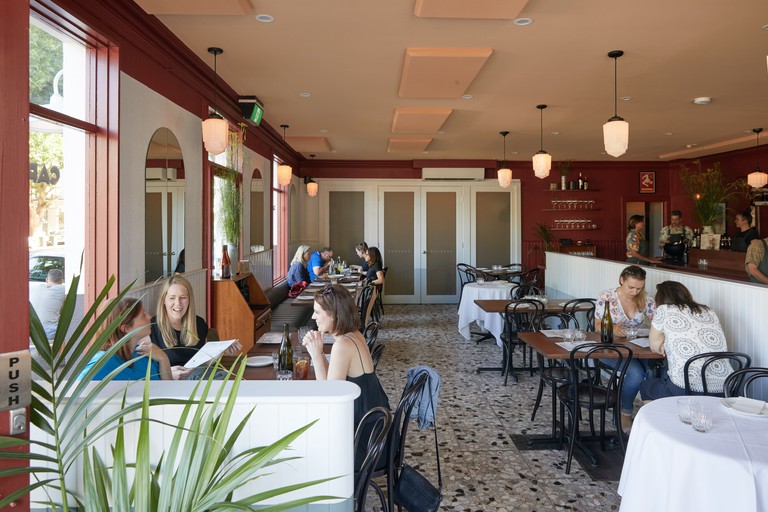 Chef-owner Casey Wall – a US native who cut his culinary teeth in New York – has added a taste of the Lower East Side to Carlton’s Rathdowne Street. Capitano specialises in the crowd-pleasing comfort food Wall was used to in the Big Apple – pizza, pasta and parmigiana. The minimal drinks list is heavy on natural wines and classic cocktails, pairing perfectly with the slow-fermented pizza dough, pastas and sides in this retro-chic space. “You’ve got this really nice seasonal bent to the food, but then there are these mainstay dishes that would not be out of place on Orchard Street in New York City as well,” Leaney says. “The food and drink is of an exceptional quality and calibre, but at the same time everyone’s in T-shirts and jeans and the music’s quite loud.” 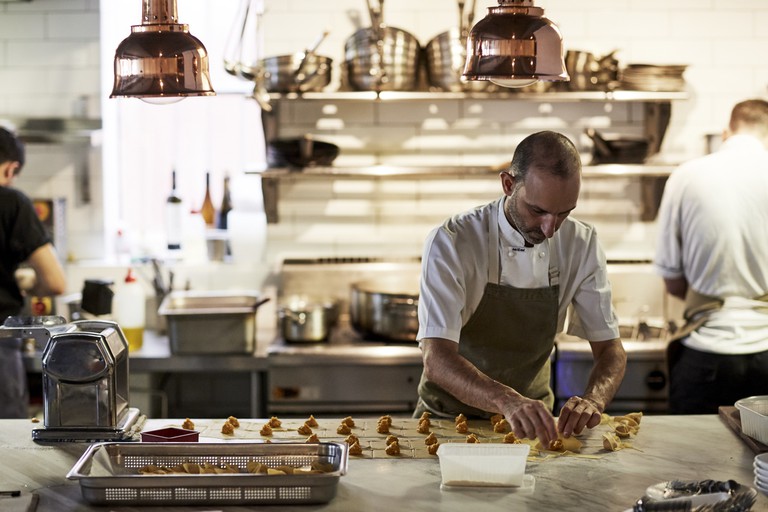 Andreas Papadakis is a prime example of a chef who applies refined technique to rustic favourites. Papadakis studied at Paris’ École Ritz Escoffier before helming Melbourne’s vaunted Vue de Monde, then transferring his skills to pizza and pasta here. Sitting beside sister venue Osteria Ilaria on Little Bourke Street in the CBD, Tipo 00 buzzes with diners scoffing squid-ink tagliolini off the marble bar. “Tipo 00 and, right next door to that, Osteria Ilaria are two of the best eating experiences in the city,” Leaney says. “Tipo for its incredibly casual and fast and busy little pasta bar.”

While long queues wait to squeeze into Tipo 00, Osteria Ilaria has much more room. Tipo’s spacious next-door neighbour serves Mediterranean meals loaded with Australian ingredients – expect warrigal greens and Crystal Bay prawns with the zucchini flowers and ricotta gnocchi – plus there’s a cellar downstairs for house-curing meats and storing bottles of vino. “Osteria is bigger, it’s sprawling, it’s high ceilings, with a wonderful open kitchen that you can sit at the bench and watch them cook,” says Leaney, again lauding chef-owner Papadakis. “What you get is something so magical about the marriage of that much technique and knowledge, with his incredibly humble, freshly rolled pasta.”

Melbourne’s Italian institutions don’t come more storied than Cafe Di Stasio, a St Kilda fixture since 1988. Owner Rinaldo di Stasio was born three years after his parents migrated to Thornbury in 1952, and Ronnie celebrates his heritage in this theatrical space on Fitzroy Street – his outstretched hands even adorn the front door, cast in bronze. The menu is approachable, but the service can take a little more grappling with. “It’s almost like you have to earn your waiter’s respect in a Di Stasio restaurant,” Leaney says. “It can be seen as pushy, but they’re just so keen to put things in your hand. They’ll also demand that you drink a Negroni or an Americano when you walk in there, but it’s a place that you embrace. They’ve been doing their thing for so long, resistance is futile.”

Rinaldo di Stasio opened his first CBD restaurant, Rosati, in 1985. In 2019, he returned to the city centre – this time with Di Stasio Città on Spring Street. If the St Kilda venue felt flashy, the CBD chapter is positively over the top – imagine artistic video installations projected on the soaring polished concrete walls. It’s a stunning backdrop to the handmade pasta and impressive drinks menu. “There’s something wonderful about a pared-back, humble room, but that’s just not Di Stasio Città at all,” Leaney says. “It’s marble and red leather and ceilings you can’t even see because they’re so high. There’s something magical about sitting in a room like that and drinking a Martini or Negroni. Hours manage to disappear there. As far as the food goes, it’s really good, but bring your wallet.” 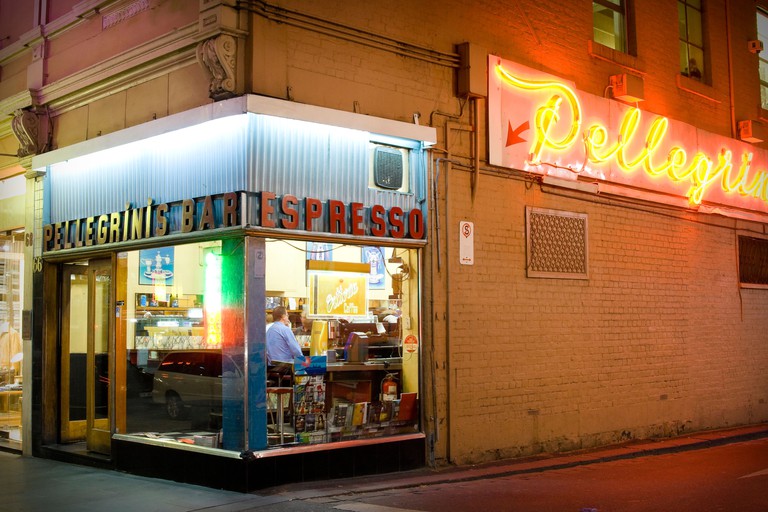 It’s located only a couple of blocks from Di Stasio Città, but Pellegrini’s sits at the entirely opposite end of the spectrum. Serving dark red pasta sauce at its cosy communal table, this character-packed coffee bar claims to have imported Australia’s first espresso machine when it opened 1954, and its legend has only grown over the seven decades since. “Pellegrini’s is old-school to the max, but it’s just such an institution,” Leaney says. “The smell of roasted garlic and olive oil is deeply embedded in the fabric of those walls, and it’s just a genuinely warm, welcoming and somewhat rustic experience. Everything is right in the world when you sit down at that bar and let them take care of you.” 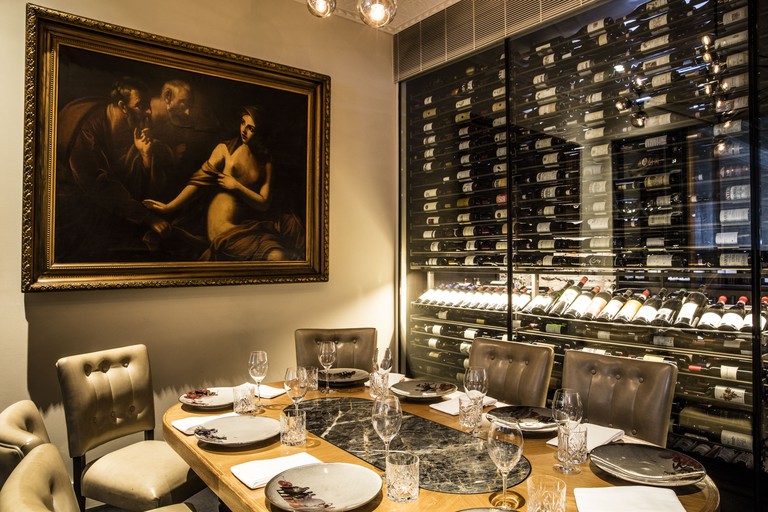 A couple of doors down Bourke Street sits an even more historic eatery. Florentino opened in 1928 and became Grossi Florentino when celebrity chef Guy Grossi and his family took the reins in 1999. A 2013 facelift only added to the opulence – all dark marble, white napkins and ceiling-high murals – which matches the decadent dishes on the menu – think lobster, partridge and wagyu rump. “It’s grand and wondrous and so refined, but the underlying theme for all of these places is just warm, gracious hospitality, and that’s what the Grossi family is so good at doing,” Darren says. “The food is just like a hug personified, and that service style that they have – even though they’re a busy, bustling restaurant in the city – is still just so fine and slick and warm and welcoming. It’s a beautiful, beautiful thing.”

Thornbury and Northcote – two suburbs in Melbourne’s inner-north east – became another hub of immigration in the post-war years, and Leaney – a resident of the area – still hears people speaking their mother tongue in places like this. Umberto doesn’t serve the kind of light roasts that speciality coffee aficionados are accustomed to, but the array of pasta dishes and half-century of history create an atmosphere hipster cafés can only dream of. “You can go in there for the first time, and it’s like you’ve been going there for years – the welcome is just so over the top and warm,” Leaney says. “Just be charmed by the space. It harks back to another era, family-owned for God knows how long.”

Across High Street lies one of Melbourne’s most formidable pizza shops, opened in 2018 by the brains behind much-loved pizzerias Lazerpig (Collingwood) and A Boy Named Sue (St Andrews). Wolf and Swill has street art on its walls, eight beers on its taps, and very little on its menu besides the inventively topped pizzas coming out of the wood-fired oven. “Wolf and Swill just do amazing wood-oven pizzas,” Leaney says. “Slow-fermented dough with a little more contemporary flavours going on. Incredible pizzas – that wood oven makes such a huge difference. I love that.”