The 10 Best Restaurants In Appleton, Wisconsin 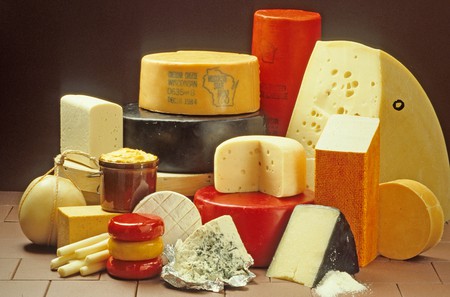 Since its humble beginning as a fur trading post, Appleton has evolved into one of northeastern Wisconsin’s culinary hubs. We explore the top 10 restaurants in the riverside city. 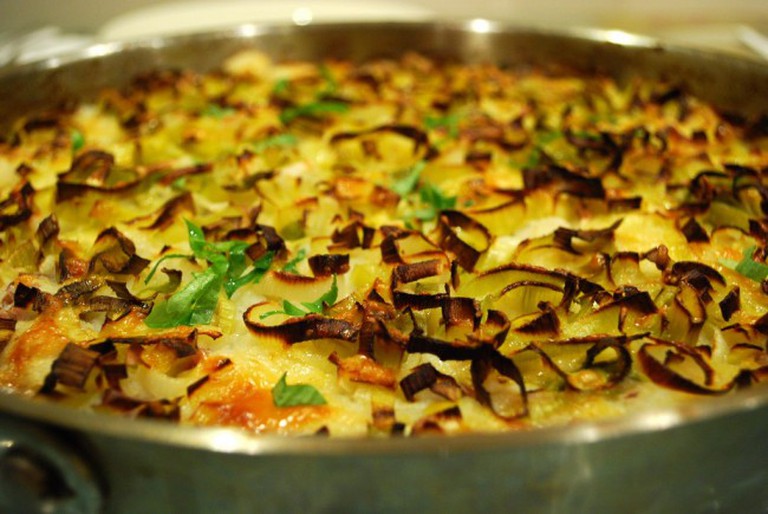 Sofrito | © Alpha
Coveting a dining experience executed ‘the way the gods intended’? The Apollon and its decadent Greek fare are the answer to your gastronomic prayers. Family-owned and operated since 1994, the cozy restaurant is host to heavenly entrees like lamb sofrito—a braised lamb shank with white wine, red wine vinegar, herbs, honey and fresh vegetables—and Mediterranean grouper baked in a combi-steamer, with tomato, Moscato wine sauce, capers and artichoke hearts. All of the divine dishes are prepared with meats and fish that are cleaned and carved in-house and bread that is baked fresh every day. These meals pair perfectly with the bistro’s romantic atmosphere that stems from richly hued landscape murals on the walls and intimate table arrangements.

Bistro, Restaurant, Italian, Vegetarian, Vegan, Gluten-free, $$$
Facebook
Email
Twitter
Pinterest
Copy link
Share
The DeFranza family know that when it comes to brilliant Italian cuisine, grandmother Carmella knew best. Inspired by growing up around meals that ‘smelled too good to be true,’ they established Carmella’s. Ever since then, the Italian bistro has come to be known for its flavorful dishes, artfully prepared sauces and family-centric approach to both preparing and eating food. The extensive menu includes pappardelle with chicken, wild mushrooms, roasted San Marzano tomatoes, spinach and Asiago cream; peppercorn-dusted sea scallops with a wild mushroom and Parmesan risotto and basil oil; and a vast selection of local craft beers. Carmella’s original sauces are also available for purchase online for a taste of home-cooked Italian deliciousness in the comfort of your own kitchen. 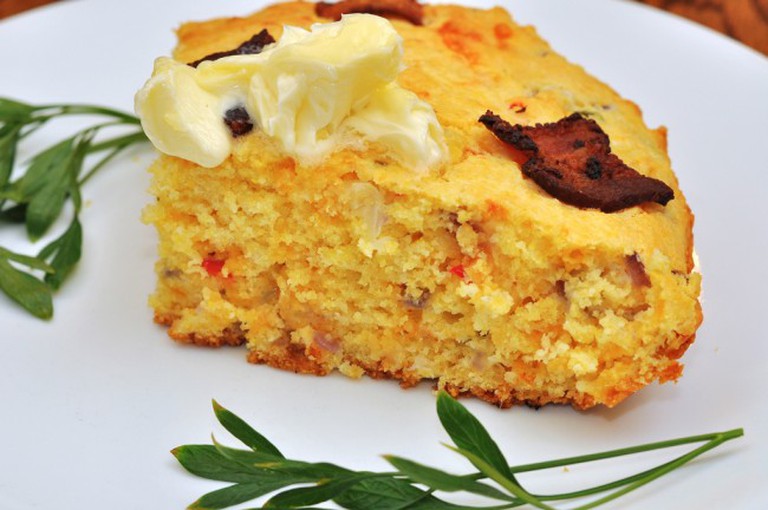 Pub, American, Vegetarian, Gluten-free, Beer, Wine, Cocktails, Pub Grub
Facebook
Email
Twitter
Pinterest
Copy link
Share
The craft beer scene is burgeoning in Appleton, thanks to the Fox River Brewing Company. While you are there, sip on pints of its floral, fairly sweet Buzzin’ Honey Ale or refreshing German-style Winnebago Wheat brews – both local favorites – or be among the first to try suds from its brand new Bago Brew Collection. You can’t go wrong by pairing them with a plate of the brewpub’s white cheddar cheese curds. If you’re looking for something a bit more complex, try dishes further down on the funky, contemporary menu. Here, you’ll find a range of options from burgers and pizzas to tacos and seafood, all prepared with an original twist. If you can’t make it to Appleton to enjoy Fox River Brewing Company’s fares, you can find its second location just a short drive south in Oshkosh, Wisconsin. 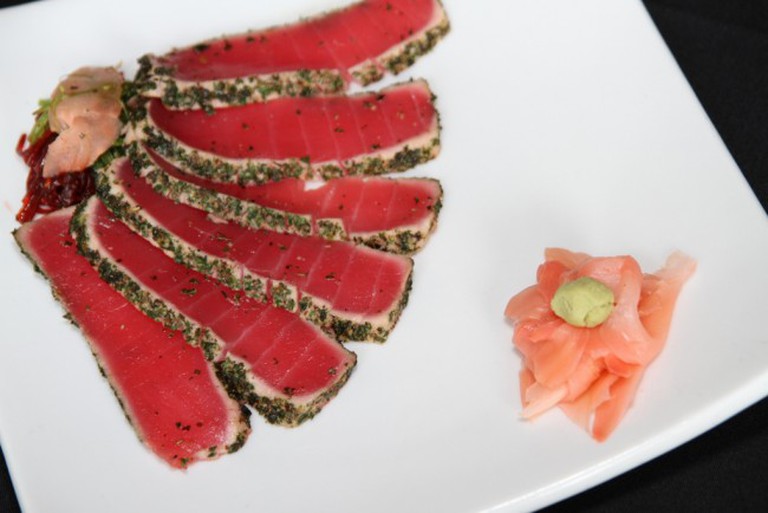 Soy Ahi Tuna | © Hungry Dudes
Hungarian-born illusionist and stunt artist Harry Houdini, who lived in Appleton for a portion of his childhood – and even claimed he was born there – is arguably the city’s most famous resident. In 2013, 87 years after his death, Houdini’s Escape Gastropub was established in celebration of his relationship with the locale. Photos and posters of the city’s pride and joy can be found on the menu and lining the walls of the restaurant’s dark, mysterious interior. A Prohibition era-themed cocktail list pays homage to the years when he was most popular. On the menu you’ll find options from the Wisconsin Panini made with roast sirloin, aged cheddar, fried onion, sauteed mushrooms and horseradish cream, to the spicy soy ahi tuna with cinnamon wontons and bok choy slaw. 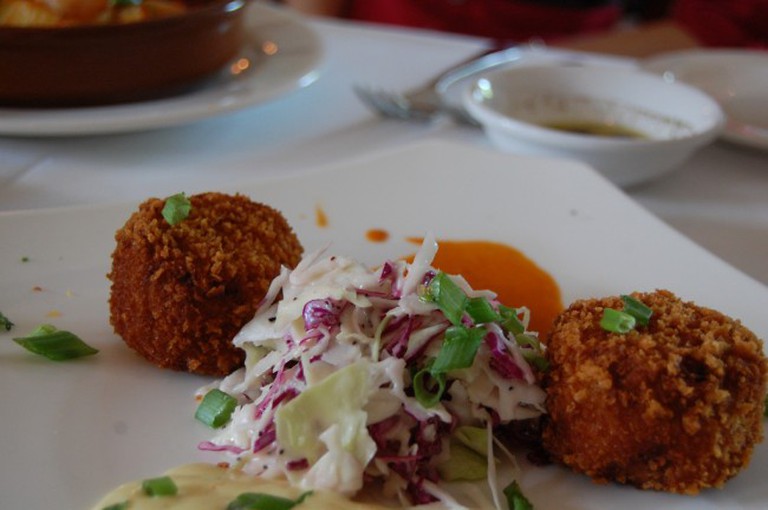 Crab Cakes | © stu_spivak
Fish fries and German-inspired fare are staples of Wisconsin cuisine, and Mark’s East Side has just about perfected both genres of food. Family-owned and operated since 1967, the supper club prides itself on made-from-scratch dishes and enduring quality. Perfect for a large group of diners, the menu at Mark’s contains several different sections, such as a ‘Taste of the Old Country’ portion, packed with German favorites like schnitzels and stroganoff, or ‘Land & Sea,’ featuring house-made crab cakes and steer tenderloin. Recently, these elements have earned Mark’s accolades like Golden Fork Awards from Fox Cities Magazine – it’s earned 15 of them within the past 16 years. Other awards include a 2010 Restaurateur of the Year Award from the Wisconsin Restaurant Association, won by the owner, operator and namesake, Mark Dougherty.

Restaurant, Indian, Vegetarian, $$$
Facebook
Email
Twitter
Pinterest
Copy link
Share
When Krishna and Kumari Chalasane moved from India to the United States in the 1990s to provide for their two sons, it was unlikely that they knew then how much they would revolutionize dining in the area. About 10 years after they opened Sai Ram Indian Cuisine in 1999, they decided to remove the buffet and focus on slowing down the dining process. Putting a refreshing emphasis on healthier fares and a customer-centric experience, the restaurant morphed into an incredibly popular venue. The skillfully made curries are some of the most popular dishes. Over the years Sai Ram has won Golden Fork Awards from Fox Cities Magazine for Best Indian Food, Best Vegetarian-Friendly Restaurant and Best Wait Staff.

Bakery, Restaurant, American, Coffee, French, $$$
Facebook
Email
Twitter
Pinterest
Copy link
Share
When Kristen DeFranza’s son, Owen, was five years old, he drew a picture of a breakfast restaurant he called ‘SAP,’ in reference to maple syrup. In 2014 members of the DeFranza family, who also own Carmella’s, made that illustration come to life. SAP, whose motto is ‘brunch, brown bag and bakery,’ highlights organic, farm-fresh and locally grown ingredients throughout its brunch-oriented menu. In accordance with Owen’s vision, the playful, retro spot decked out in 1950s-style furnishings serves up dishes such as brioche French toast, with vanilla bean crème anglaise and seasonal caramelized fruit, and Nola’s Red Flannel hash, with roasted beet, sweet potato, onion and peppers, all day long. For those not in the mood for a breakfast- or brunch-style meal in the later hours, entrees like the brisket pot roast or Scottish salmon cake are available too. 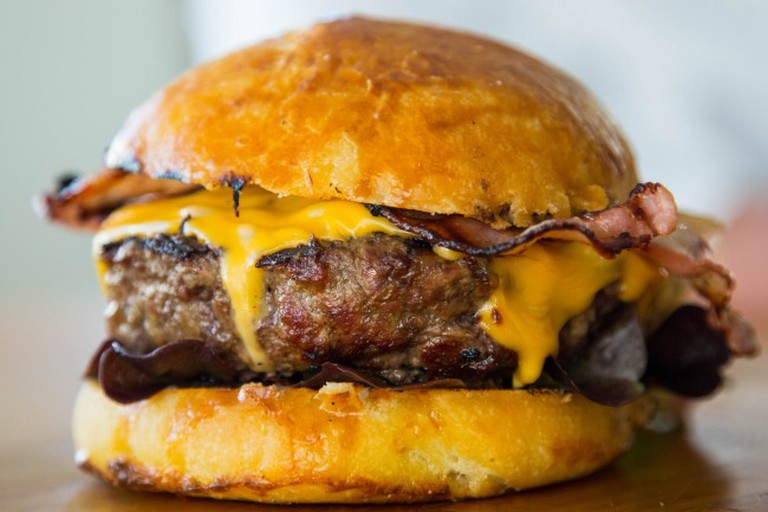 Grass-Fed Beef Burger | © niki georgiev
In the late 1850s, a stone building was constructed along the Fox River canal system and became the first brewery in Outagamie County. In an era when Puritan opposition to brewing and selling alcohol within the boundaries of the city was very fierce, the brewery somehow managed to keep the area’s residents’ thirsts quenched. About 145 years later, having survived a fire and closed down several times, it re-opened in 2004 as Stone Cellar Brewpub and has been flourishing ever since. Now focused on organic and environmentally friendly practices in its restaurant and brewery, Stone Cellar is among the state’s industry leaders in sustainability. It sends spent grain off to farms to feed animals and serves burgers made with 100 percent grass-fed beef.

Restaurant, Steakhouse, American, $$$
Facebook
Email
Twitter
Pinterest
Copy link
Share
The 30 miles between Appleton and Green Bay—home of the Packers, Wisconsin’s beloved football team—doesn’t diminish Appleton’s fans’ passion for ’the Green and Gold,’ as made obvious by the existence of Vince Lombardi’s Steakhouse. The steakhouse is named for the late Packers head coach that led the team to five national championships in seven years during the 1960s. It contains more than 400 items of Lombardi’s personal memorabilia, including photos, trophies and more. On its menu you’ll find choices like tea-spiced poached halibut, blue cheese crusted stuffed filet, and Moroccan chicken. In its collection of culinary prizes you’ll find Wine Spectator’s Award of Excellence, which has been given to the restaurant every year since 2005 to recognize its impeccable wine list.