Meet the Legends Surfing the 'Malibu of the Midwest' 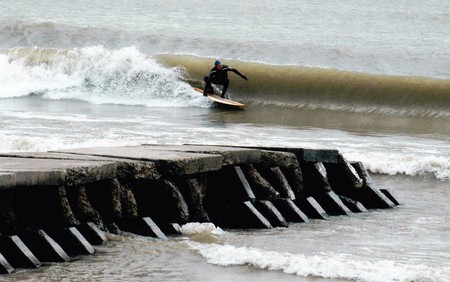 The gales of November have arrived and so has dawn in Sheboygan, Wisc. A sliver of sun peeks over Lake Michigan’s eastern horizon. Surf rolls out in the distance.

In this uncertain light, small figures in dark wetsuits paddle their surfboards through the haze. They head toward The Elbow, where the North Pier bends southeast. The Elbow is one-third of the way out to a century-old red lighthouse. It’s a prime spot for 10- to 12-foot swells.

Maniacal winds throw seagulls. The birds land and look for cover under a jetty, or seek shelter between boulders outlining the pier.

For the Williams brothers, sanctuary is not their scene. These cats thrive on chaos. The wilder the conditions, the more intense the stoke. You see, “Water Flea” Lee and “Longboard” Larry, 63-year-old twins, are the undisputed leaders of surfing on the Great Lakes. Since 1966, they’ve practically lived in the waters off Sheboygan.

“We need low-pressure systems that move,” Lee says in the 2003 Dana Brown film Step Into Liquid. “And if they’re moving in fast, they create wind. And if we’ve got warm water and 20-mile-an-hour winds, we’ve got waves.”

For 25 years, over Labor Day weekend, Lee and Larry organized the Dairyland Surf Classic, the largest freshwater surfing competition in the world.

“We had an incredible ride, kind of got a little famous,” Lee says. “We did it for fun and threw a little surf fest.”

The former competition, which reached a peak of 100 competitors and crowds of spectators, has given way to a more sedate, surfers-only gathering filled with surfing, paddling, music and fellowship.

“We went back to our beginnings—guitars, drums, ukuleles, jam and potluck,” Larry says.

Surfers still make the pilgrimage from near and far for Labor Day weekend, chosen as a clear division between summer’s end and the beginning of surf season, strongest from November to March.

“The Aloha spirit is the thickest and richest in the Midwest for caring and sharing,” says Larry, a familiar sight on Sheboygan’s beaches in his bright Hawaiian shirt, coral-bead necklace with prehistoric shark’s tooth, deep tan and shaggy, sun-highlighted hair.

In winter, often over brews and braggadocio, he and his fellow surfers wear ‘Team Blatz’ chocolate-brown jackets embroidered with a beer patch and each surfer’s name. Fifteen of these Dickies ‘Ike’ jackets are in circulation, according to Larry.

Sheboygan’s geographic good fortune is the primary reason North Beach at Deland Park on Broughton Drive is a magnet. The beach is centrally located on the western shore of Lake Michigan, and the city’s shoreline contains 22 breaks on its five-mile coast. Sheboygan also juts five miles into the lake, causing waves to come from four directions.

“What makes this such a popular place for surfing is our gnarly coastline,” Larry says. “Along with our point breaks, our coves, our one-mile-long pier, our reef and rocky outcroppings, this is easily one of the best places to experience surfing in the Midwest.” 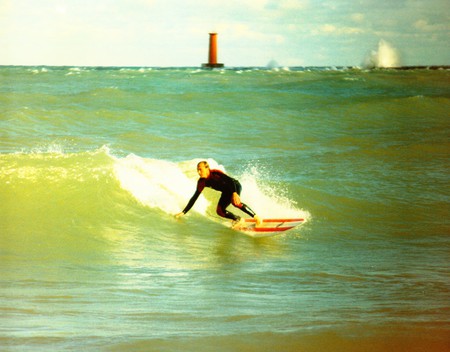 The stoke, as Larry calls it, is the adrenaline rush surfers get riding in outrageous conditions, be it in sub-zero wind-chill factors or on top a “barrel so big, it’ll hide a Volkswagen.” Surfers have come to call this unique natural setting COTU (Center Of The Universe) and “The Malibu of the Midwest.”

The Williams brothers grew up three blocks from the beach and were drawn to the shore. Once they turned 10, their mother permitted them to cross busy Eighth St. unsupervised and walk the next block or two to the beach. Surfing became a rebellious outlet for them in the 1960s. Lee and Larry admired an older group of skim boarders and surfers. They were cocky, wore Huarache sandals and beads, and listened to Jan and Dean.

“We were looking for our identity,” Larry says. “We wanted to be just like these guys. We were fairly well-muscled, outdoors people. We’d drive Mom nuts.”

For the next two decades, surfers in the Williamses’ sphere went from high school to the next phase: casting their nets into the open world. But their hearts remained at the shore and they would return to North Beach. Guys like Mark Rakow and Mark Wente (for 50 years), and Teek Phippen and Michael Miller (25 years), have been on the water with the Williams brothers.

“We’ve got a tight-knit group of guys,” Lee says in Step Into Liquid. “Maybe a dozen guys; we’ve all kind of grown up together. As kids, we hung out at the beach. Some of the guys went off to college, some went off to Vietnam, whatever. But guys came back and married and raised families. And we surfed through all of this. We hit the water, we hoot and holler to each other, we surf for four or five hours, someone will crack open a 12-pack of beer and we’ll just lie about the good rides we had.”

Leaders of the scene by 1988, Lee and Larry founded the Dairyland Surf Classic.

“Surfers had a bucket list and they would design it so they could be here in Sheboygan on Labor Day weekend,” Larry says. “It went national, then international. Corona came in as a sponsor. We’d have surfers from Hawaii, South Africa, Australia, California, up and down the East Coast.”

You might say that surfing helped resuscitate Sheboygan after its downtown and riverfront went dormant in the ’60s and ’70s. Plaza 8, a failed pedestrian mall along the main artery, Eighth St., had killed the downtown. Along the riverfront, one side held abandoned fish shanties, the other a 42-acre eyesore containing the remnants of a coal company. And the area’s longtime reliance on furniture manufacturing had ended as production and jobs moved out of the area. While Sheboygan remained “The Bratwurst Capital of the World,” its other longtime claim as “Chair City” had vanished.

The city reinvented itself as a tourism hub in the 1980s, ’90s and beyond. The downtown mall was reopened to traffic, reviving business. One side of the riverfront was lined with trendy shanty restaurants and shops. Nearby Kohler Co. built golf courses at Blackwolf Run and Whistling Straits that would host LPGA, PGA and Senior PGA championships. Coal piles on the Lake Michigan side of the riverfront were cleared and in their place rose the imposing Blue Harbor Resort, reminiscent of the Hotel del Coronado in San Diego. And what location best sums up tourism and vacation? The beach.

“We designed the Dairyland Surf Classic in part to promote Sheboygan and the eateries along the riverfront,” Larry says. “The tourism board loved what we were doing. From North Point to the Coast Guard station at the mouth of the Sheboygan River (about one mile), it was filled with cars and people everywhere.”

Surfing onto the screen

Word got out and Hollywood came calling in 2003. Filmmaker Dana Brown, son of influential surf filmmaker Bruce Brown (The Endless Summer), chose Sheboygan for an episode in Step Into Liquid. Larry paid for it, sleeping only three and a half hours in three days of filming and all-night partying, but the Sheboygan surfing legend grew.

“Lee and I would go to California and we’d be recognized more there than we were in our hometown,” Larry says.

The film captured Sheboygan during warmer months when waves could be timid—“minimally functional surf,” The New York Times called it, in its film review. In prime surfing season, conditions get brutal and gear is heavy. A surfer’s armor against Wisconsin’s winter consists of a 6-millimeter-thick neoprene wetsuit, 7-millimeter boots and 5-millimeter mitts.

“If you just close your eyes and imagine a gladiator suiting up before going into the Colosseum,” Larry says. “A 10-foot fiberglass spear tucked under your arm, you climb the iceberg to jump into the arena of perfect, blue-ice-trimmed, 33-degree water, 17-degree air and minus-24 wind chill, to challenge perfect 6-foot waves. You are in a different world.”

While the Williamses’ story has appeared in major newspapers, and on NPR and Good Morning America, the story was given extensive written treatment first by Bill Povletich, who wrote Some Like It Cold: Surfing the Malibu of the Midwest. 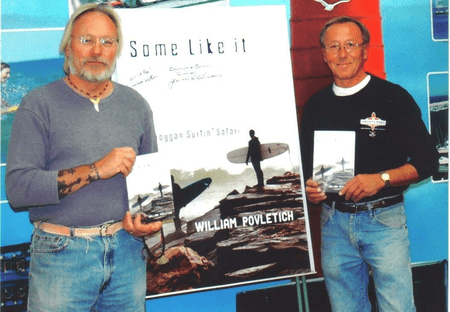 “How can you not fall in love with two brothers who found a passion and spent their whole lives chasing it?” says Povletich, a Wisconsin native who lives in California. “Their story is as much about the unwavering bond of brotherhood as it is about riding radical waves in blinding blizzards and launching surfboards off icebergs.

“When Lee and Larry founded the Dairyland Surf Classic in 1988, little did they realize their passion for surfing would help redefine the nation’s bratwurst capital as the Malibu of the Midwest. Now whenever lifelong California surfers discover I’m from the same corner of the world as ‘those guys from Step into Liquid,’ they tell me, ‘You haven’t surfed every corner of the planet until you’ve surfed Sheboygan.'”

The Williams brothers have influenced a new generation of surfers, including Alex Marks, 26, who has been surfing for 13 years. Lee and Larry got him his first surfboard and wetsuit.

“I’ve surfed in Hawaii, and Sheboygan is still one of my favorites,” Marks says. “Surfing The Elbow will get your blood flowing. If there’s waves, I’m driven to go. Granted, it’s a little trickier when it’s cold. I sliced my head open with my surfboard. I’ve jumped off ice shelves, sometimes 15 feet tall. That’s intense.”

Marks lives a block from the lake and can see The Elbow from his home. Once, he moved away from the lake, but he felt too distant and went back.

Larry says they are living in the Midwest but much like Hawaiian or Californian surfers.

“Surfing is not just a sport, it’s a lifestyle—the music we listen to, the vehicles we use to transport our boards, the crazy, colorful shirts,” he says. “It’s the way we raise our kids, the food we eat.”

Surfing gets into your blood and becomes all-consuming.

“A surfer could just stare at waves for hours,” Larry says. “A golfer wouldn’t do that on the course, a tennis player wouldn’t on the court. There’s such a richness to this passion. We check weather reports, barometric pressure. You just need a wetsuit, a surfboard and the third thing you need is patience, waiting for the right conditions.”

During the gales of November, your patience might not be tested for long. Simply set your alarm clock for dawn, grab your board and go. The waves will roll.