Fish, Freud and Feminine Beauty in the Art of Ellen Gallagher 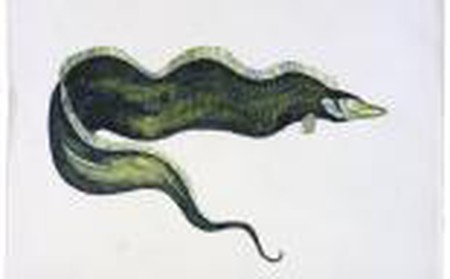 Artist and Rhode Island native, Ellen Gallagher has been active in the international art scene since the early 1990s. Her 2013 retrospective at the Tate Modern in London gives a glimpse into how the artist uses an attractive aesthetic language to explore diverse themes relating to her own complex background. 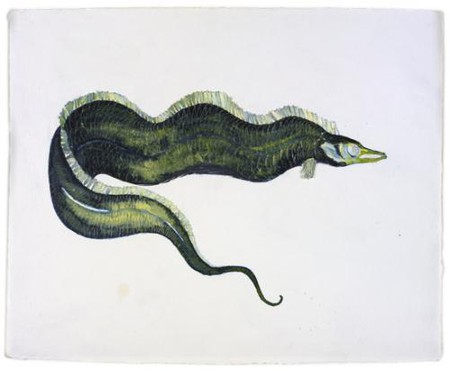 In her paintings, prints, collages, reliefs, video, and sculptures Ellen Gallagher layers, intertwines and notably revisits preferred themes. Her explorations range from vaudevillian minstrelsy, black identity and its ties with established notions of beauty, and marine biology in relation to myths of the deep. The 2013 retrospective at the Tate Modern in London demonstrates her strange yet witty examinations of these complex histories which weave in and out of association with fiction and fantasy. Although born in Rhode Island in the United States, the artist is of Scottish and African origins; the sense of otherness inherent to the multi-racial/multi-cultural identity helps form much of the inspiration for her projects.

In room number one of the Tate exhibition, the artist has lined the walls with ruled paper of the kind used to teach young children to form their letters. The dull lighting in the space causes a delay in one’s perception of the lined print, yet it becomes apparent that the paper has also been used to build up the surface in many of her canvases. Rather than referencing the paper as an object and signifier, Gallagher’s interest in the sheets relates to the structuring function of minimalist geometry. This structuralist motif is repeated across her whole body of work and emphasises the power of the grid to impose order and meaning, uniting her, at times, seemingly disparate themes.

One work, Odalisque (2005), is projected directly onto this lined paper surface. The work appropriates a photograph taken of Matisse in the act of depicting a harem girl. In Gallagher’s version of the image, Sigmund Freud is the man doing the illustrating, as the artist’s own face stares back at him from the reclining body. An intricate web of race, sex and power relations is woven in this carefully staged photomontage. The most dominant work in this first room, it maintains initially undisclosed ties to several of her overarching artistic interests. 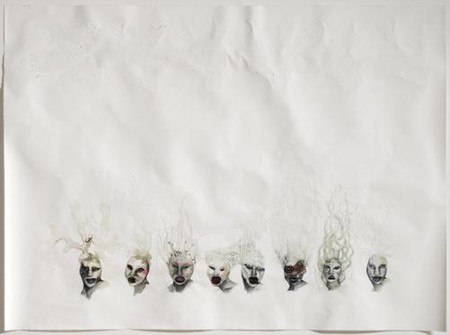 Freud’s presence in the piece has an unusual association with an ongoing project of Gallaghers titled Watery Ecstatic (2001-present). The distinguished psychoanalyst is known to have desired as a young man to become an oceanographer, and in his early twenties he performed research on sea life at the marine zoology laboratory in Trieste. Likewise, Gallagher spent time during her student years aboard an oceanographic research vessel, observing creatures under a microscope and producing academic drawings of these peculiar life forms. The paintings, sculptures, and reliefs of Watery Ecstatic, draw from her background in marine study and an interest in the African slave myth of Drexciya.

The elegiac tale of Drexciya relates to those African slaves who, on the way over to America aboard slave ships, were tossed overboard for possessing qualities that would make them undesirable as slaves, and thus bereft of value. According to the myth, Drexciya were those unborn children of the pregnant African women who, having learned to breath underwater in the womb, adapted seamlessly to life in the ocean and formed a sea population. Watery Ecstatic mixes images of fish and other sea life with the heads of African figures. In one work in the series, the hair of colourful merpeople grows upward in the manner of coral or seaweed and merges with the white of the paper as Gallagher’s watercolours slowly fade into the subtly incised imagery that she worked into the upper half of the thick watercolour stock. Other examples in the series seem completely bare at a distance, but on closer inspection reveal an intricate and vast cycle of fantastical characters in delicate relief. At the center of the display for Watery Ecstatic, as it is was conceived for the Tate exhibition, is an extensive structure formed with white bars titled Jungle Gym. This sculpture pays reference again to the minimalism of artists like Sol Lewitt and Agnes Martin with its clean lines and grid formation. At close distance, one can detect a series of carvings on the surface of the white bars. The repeated imagery, which the artist refers to as the ‘disembodied spectra of minstrelsy’, makes reference to the fisherman’s pastime of whale bone carving and brings to the work one of her most recurrent symbols.

Carved into the white poles are faces, formed with two bug eyes and a gently smiling pair of full lips, which recall the cartoon-esque features that early twentieth century actors wore when performing in blackface. The minstrels permeate many of Gallagher’s works within the exhibition. In one such painting, titled Oh Susana (1993), the artist has covered the entire surface with this stereotypical imagery. The title recalls the all American folk song of the same name which was originally written in the early nineteenth century as a slave tune, but became adopted by white men heading west in the gold rush. Gallagher’s use of this imagery acts to suggest that race is, above all, a performance.

Other works which deal with African American identity, and for which Gallagher is perhaps most known, are her ‘yellow painting’ series, and DeLuxe (2004-2005). A room at the Tate filled with her yellow canvases offers a dizzying network of advertisements for hair and beauty products specifically designed for black women and men from the 1950s through the 1970s . Each advertisement features an individual face which the artist has manipulated by removing the eyes and adding an elaborate, yellow wig, or space helmet like adornment, made from layered plasticine elements. The promotional text for each product is set against Gallagher’s attempt to cover over each figure’s natural black hair with a yellow, or blond, wig. These bizarre formations thus allude to notions of the ideal blond female while at the same time acting as spectacular aesthetic creations. 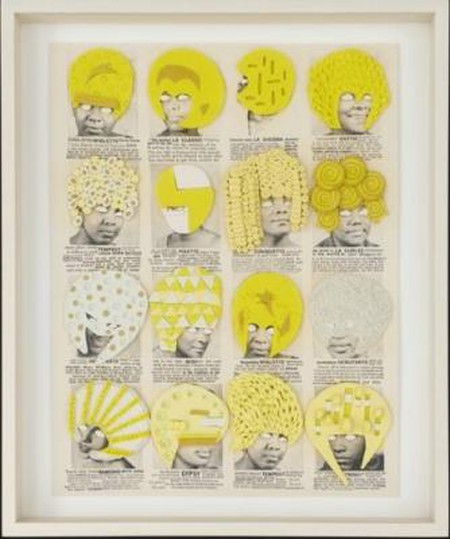 The premise for DeLuxe is similar, although the extracted endorsements take more varied forms, and each promotion is framed individually. In a detail from the lower left hand side of the piece, a dark skinned African American man holds up the hand of a lighter toned African American woman who sports a sparkling diamond ring. The head of the female figure is almost entirely covered over by a plasticine, Swiss cheese like block, revealing only her mouth and the holes where her eyes should be. The headline of the advert, which is for a skin bleaching cream, reads: ‘He never gave me a second look… until Nadinola gave me a new look!’ The overt racial message in the advertisement itself suffices to catch the viewers attention.