Why Attending a Portland Timbers Game Is a Must 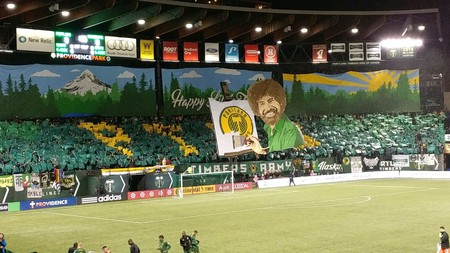 The rain was relentless. The drops caromed off waterproof jackets, baseball hats and exposed hair. It gently landed on the grass field. It slapped the concrete walkways. Yet, the deluge didn’t disrupt the resounding noise reverberating from the endless sea of green-clad supporters that filled the north end of the stands at Providence Park. The Timbers Army were in full force.

Portland, Oregon’s largest city, may be known for its hipsters, eco-friendliness, microbreweries and coffeehouses, but sports and its diehard fans should be right up there as well. 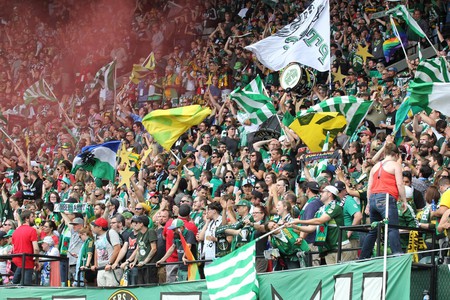 Providence Park, home to the Timbers, Thorns and Portland State University football, is located in downtown Portland. It isn’t an hour-long train or subway ride away. It isn’t surrounded by an abundance of concrete parking lots. It isn’t located in a city suburb. It is Portland.

Upon entering Providence Park, visitors immediately get a sense of its rich history and authenticity. First built in 1926 as Civic Stadium, Providence Park has hosted everything from political gatherings to dog racing, Elvis Presley, and cricket matches.

Its columns and wooden bleachers are still featured prominently. There are no cushy La-Z-Boy-type front row seats similar to those found behind home plate at Yankee Stadium. Of course there are suites and more luxurious sponsor-laden amenities, but, like the city’s sports landscape, Providence Park isn’t oversaturated with brands and logos, nor does it dominate the stadium’s atmosphere like others with constant corporate signage in your face.

The game-day experience is equally as authentic as the park itself. Rarely is business attire spotted. Fans are in Timbers jerseys, training jackets or anything green. The north end of the stands that hosts the Timbers Army, the team’s official supporters group, is littered with flags, scarves, smoke, confetti and song.

The teams take the field. Hands are placed proudly on hearts. Fans stand and remove their hats in preparation for the national anthem. But there’s no music or singer. Instead, the 20,000-plus in attendance provide the lyrics, singing so loudly and proudly it will raise the hair on the back of your neck.

Now comes time for the tifo to be raised. A tifo is a choreographed large banner or series of banners displayed by fans at a sporting event. They are synonymous with soccer games and the Timbers Army has had some classics, ranging from The Wizard of Oz to Freddy Krueger to Bob Ross.

The referee blows his whistle and the game starts. Providence Park is electric with the chants and noise from its supporters, especially the Timbers Army. When the ball is smashed into the back of the net by the home side, somehow the fans get even louder. Confetti rains down from the ski. Colored smoke bellows out of the North End. Then, the seemingly out-of-place roar of a chainsaw.

Proudly displayed in front of the North End is a massive tree trunk. Following each Timbers goal, a section of the tree is cut off by Joey Webber, the team’s real-life “mascot” known as Timber Joey. Timber Joey then walks around the stadium with the slab in tow, posing for pictures with fans or letting them touch the circular hunk of wood. He presents the slab to the respective goal scorer after the match.

The final whistle blows. Whether it was another Timbers win or a defeat, supporters filter out into the streets and local food and drink establishments. Timbers colors are still on display late into the night on game day. Just like the constant rain in the Rose City, Timbers fans are relentless.