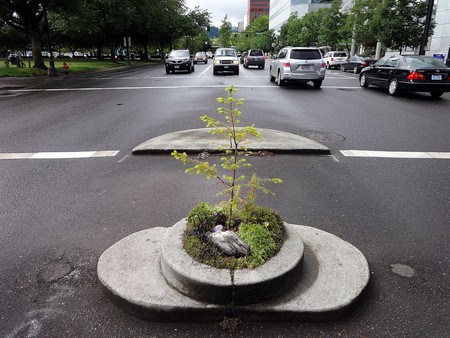 The smallest park in the world is housed in a Portland median. It’s situated in a two-foot wide plot on what’s now called Naito Parkway.

Dick Fagan was an eccentric man. In 1946, he returned from World War II and resumed his journalism career with the Oregon Journal in Portland. From his second story window, he could see an unused hole in a median on Front Street (now Naito Parkway) that was supposed to house a light post that never arrived. As the hole began to collect weeds, he decided to plant flowers in it, brightening his view.

The Irishman billed the two-foot-wide plot “The Smallest Park in the World” and dedicated it on March 17, 1948 (St. Patrick’s Day). He named it after his column in the paper, “Mill Ends,” which refers to leftover irregular pieces of wood at lumber mills. Like the misfit lumber, the column told interesting stories. Fagan began publishing fantastical tales about his tiny park, often referencing the leprechauns who took residence in the 452 sq/inch lot.

As legend has it, the imaginative journalist spotted a leprechaun digging in the hole from his office window, and when he ran down and caught it, the leprechaun granted him a wish. Fagan wished for a park of his own, but since he didn’t specify the size, the leprechaun gave him the hole. That’s the real origin story of Mill Ends park, as far as its founder is concerned. 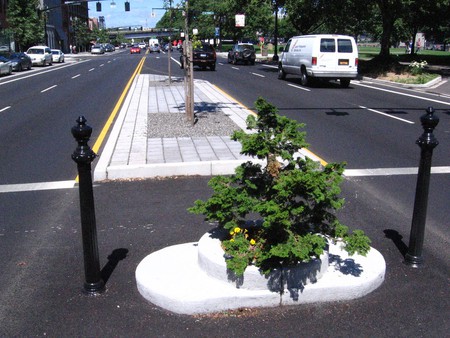 Fagan’s favorite character was Patrick O’Toole, the leader of the leprechaun community. Though the writer often referenced O’Toole and the park in his whimsical column entries, the most famous story was a published response from the head leprechaun when the mayor tried to propose an 11 p.m. curfew on all city parks. O’Toole warned the dangers of trying to evict him and his followers and threatened a leprechaun’s curse if the mayor attempted to do so. Subsequently, the leprechauns were allowed to stay.

Unfortunately, Fagan died of cancer in 1969, but lives on in the spirit of Mill Ends Park. “The only leprechaun colony west of Ireland” was recorded by the Guinness World Records as the smallest park in the world in 1971 and was named an official city park in 1976. On St. Patrick’s Day, of course.