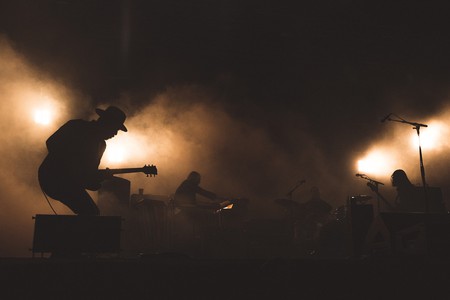 Portland may be most famous for its hipster and foodie culture and for being satirized on the hit show Portlandia, but this Pacific Northwest city is also a hub of talented musicians about to hit it big. (Ever heard of The Decemberists, Pink Martini, Blitzen Trapper, or the Dandy Warhols?) Here are 10 up-and-coming Portland bands to watch so you can say you knew them when.

This local punk rock band, claiming inspiration from the likes of Wipers and Drive Like Jehu, has played everywhere from local favorite punk dive The Know to KEXP radio. Lead singer Aubrey Horner sounds as if Janis Joplin sang in The Ramones, and the infectious and energetic music sometimes edges over into a disco-punk sound.

Merging indie-pop, electronica, and a dash of jazz, Coco Columbia is such a talented singer, it’s hard to believe it was only in 2012 that she turned the full focus of her energies towards singing, dropping out of music school, where she was focusing on jazz drumming. Just try not to put her hit single “Weight on Limb” on repeat.

Singer-songwriter Haley Heynderickx specializes in acoustic ballads, and her voice most resembles Joni Mitchell’s. Heynderickx has been performing in local bars before she was old enough to drink, and her years of practice has paid off with the release of four lush tracks on her Fish Eyes EP.

Dreamy pop-quartet Lavender Flu is the exact kind of music to repeat on a lazy, hazy summer afternoon. Guitars, drums, and vocals are all on point in the group’s debut album, Heavy Anthem, featuring too many anthems to count.

Perpetually attired in technicolor tutus and sparkly vests, the members of Lola Buzzkill exude the funky and bright ethos of their music. The band’s pop riffs have a distinct edge, but you’ll still want to dance with them all night long.

“I live between your soul and your skull,” raps Portland artist Tron Burgundy on Old Grape God’s trippy single, “Urth City Hues,” and his heady fusion of rap and R&B registers in just those places. Electronic beats and even a harp (on “WormHoly Ghosts”) set the backdrop to Burgundy’s rhymes.

The feel-good all-female band Candace consists of three women who excel musically individually and even more so as a group. Each shimmering song sounds like the soundtrack to a story’s climax.

Cat Hoch’s seriously rocking anthem “Look What You Found” epitomizes her tough yet ethereal approach to her music, made alongside Unknown Mortal Orchestra drummer Riley Geare.

After six years with his beloved Portland band, We Shared Milk, Boone Howard struck out on his own. His ebullient songs belie their subject material—Howard’s recent breakup—and are the perfect mix for road trips and heartbroken wallows alike.

Perhaps Portland’s most exciting hip-hop artist, Mic Capes tackles heavy subjects like police brutality, misogyny, and social injustice with trippy, irresistible rhythm. Capes draws on his experiences growing up in North Portland to pen his lyrics and has said he rides the bus and talks to kids he mentors for further inspiration.