There Is Now Only One Remaining Blockbuster in America 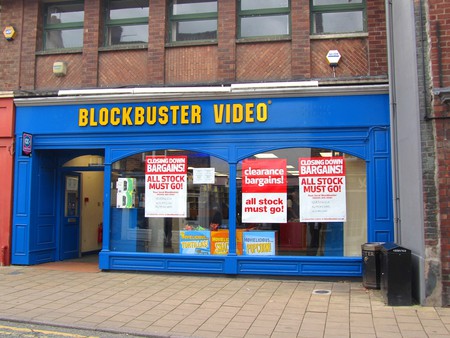 One of many closed Blockbuster storefronts | © Chris Green / Shutterstock

The Blockbuster in Bend, Oregon is the last reminder of pre-streaming America.

Bend is known for its beer and its natural beauty. Now, the Central Oregon hub can also add “home of the last remaining Blockbuster in the country” to its list of accolades.

On July 16, the other two U.S. locales—both in Alaska—finally closed their doors. The stores’ Managers, Kelli Vey and Kevin Daymude, broke the news via Facebook. “It is sad to say goodbye to our dedicated customers,” the post reads. “We have thought of you as family for the past 28 years.” Both Vey and Daymude have been with the company since 1991.

The ’90s were the video rental stores’ heyday. Anyone who grew up in that era most likely has fond memories of going to Blockbuster with their parents and picking out a movie (plus popcorn and candy, if they were lucky), but with the rise of the Internet and subsequent streaming platforms, those brick-and-mortar stores became antiquated fast.

In 2004, there were still over 9,000 Blockbusters worldwide. In 2o1o, the company filed for bankruptcy and by 2013, Blockbuster was defunct and all the corporate-owned stores shuttered their windows. However, franchised stores were able to license the brand name and run independently.

For several years, the privately owned stores were able to keep the lights on in rural areas with limited internet access. A year ago, there were 10 U.S. locations still holding on: one in Texas, three in Oregon, and six in Alaska.

“It’s exciting, it’s sad and a little scary,” the store’s general manager Sandi Harding told Willamette Week about being the last Blockbuster in the country. “It just is what it is. We’re excited to still be here, and hope that we last out a little longer.”

She said the store’s been kept alive by tourists astonished to see the relic still open, people hunting for a physical movie to buy, and locals who are regulars.

“The social interaction you get—face-to-face talking to people, not having your nose in your phones,” Harding explained to NBC News. “I think that’s what you find coming into a Blockbuster store.”