Everything You Need to Know About North Carolina Barbecue 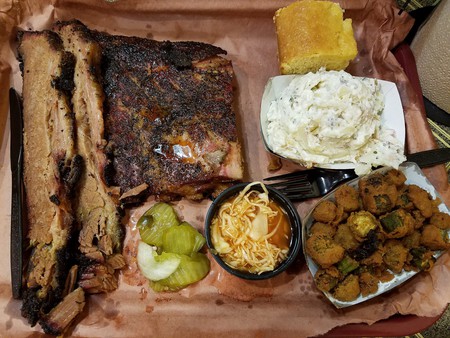 North Carolina has a proud – and competitive – barbecue tradition that divides the state into two barbecue regions, Eastern and Western. Eastern-style North Carolina barbecue means a vinegary, peppery sauce atop the whole hog while Western, also known as Lexington-style in honor of the city it emerged from, is pulled pork shoulder with a tomato-based sauce. The latter tends to have a much smokier flavor than its counterpart since it uses a smaller cut of meat. Additionally, some people argue that the westernmost part of North Carolina deserves its own distinction, since pitmasters in WNC have shown a willingness to innovate as well as borrow methods and flavors from barbecue regions throughout the country. And any conversation about North Carolina barbecue must include the types of slaw served alongside each of the state’s BBQ styles.

North Carolinians who favor Eastern-style believe their barbecue is best because it’s the most traditional. It dates back to pre-1876 when Heinz debuted ketchup and pitmasters in the Western part of the state decided to start experimenting with the new condiment. Regardless of the internal debate among residents, many outside the state see North Carolina barbecue as a singular powerhouse.

“North Carolina is one of the pillars of the barbecue world,” barbecue editor Daniel Vaughn explained to National Geographic for “Where to Find the Best BBQ in America.” At least locals do typically agree that pulled pork is the way to go over other barbecue regions’ preferred star, such as ribs or brisket. 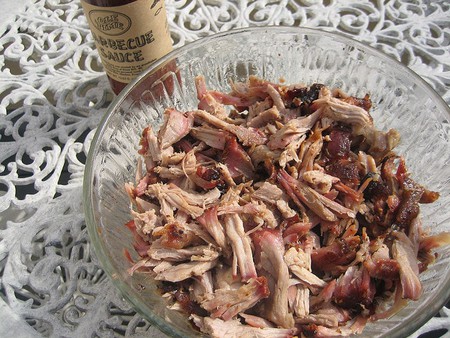 Another nickname that North Carolina’s barbecue culture – formed by over 430 Great NC BBQ Map destinations – has obtained over centuries of BBQing is the ‘Cradle of ’Cue.’ This moniker fits quite well since so many restaurants have earned prestigious awards. For example, Buxton Hall BBQ in Asheville was named one of the top 10 best new restaurants in America by Bon Appetit when it opened in 2016. And Skylight Inn earned the James Beard America’s Classics Award in 2003, while Sam Jones of Sam Jones BBQ was named a James Beard 2018 Restaurant and Chef Award Semifinalist.

Unsurprisingly, each style of North Carolina barbecue comes with its own version of slaw. In the west, diners will find a red slaw since ketchup has found its way into it as well, while in the east, slaws are white or yellow and typically more tart or creamy. And while pulled pork served on a sandwich or as part of a platter is king in most North Carolina barbecue establishments, you can find B’s Barbecue in Greenville cooking up chicken and fun alternatives at places like King’s Restaurant. This long-standing BBQ joint created an item dubbed the Pig in a Puppy, a huge hushpuppy sliced in half and piled with creamy coleslaw and chopped BBQ.

To experience all that North Carolina barbecue has to offer your taste buds, plan a road trip along its Historic Barbecue Trail. This 450-mile trail spans the state from the Tennessee border to nearly its coastline. And about halfway through your journey, you’ll arrive in Lexington, which deserves a chunk of time on your itinerary as it’s been called the Barbecue Capital of the World. In fact, it supports 19 BBQ joints with a population of only 20,000. Of course, this population swells during the Barbecue Festival held here in October, which will celebrate its 34th year in 2018. Plenty of other barbecue festivals take place in the state throughout the year and offer a convenient way to explore North Carolina’s barbecue scene as well. 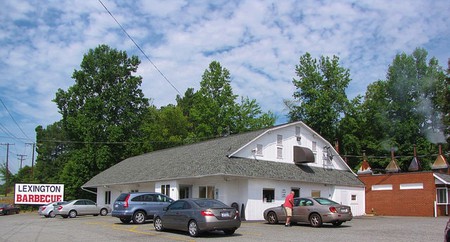 Lexington Barbecue, established in 1962 | © Gerry Dincher / Flickr
Give us feedback