New Orleans' Best Music Venues For Those Who Don't Like Jazz

New Orleans is known for its connection with jazz music — however, the city fosters a multicultural variety of beats that allow visitors the opportunity to enjoy music other than jazz. Whether you are looking for blues, roots, funk, R&B or rock, there is no better place to do it. In this city…the beat always goes on! 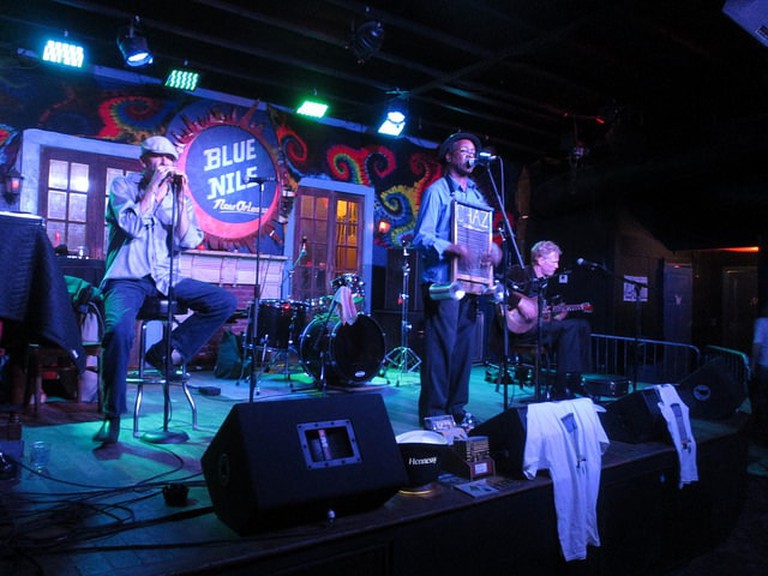 © Infrogmation of New Orleans | Flickr
If you are looking to stray from Bourbon Street and experience authentic New Orleans music, The Blue Nile is one of the longest-standing music clubs on the Frenchmen Street strip. This groovy joint offers visitors live performances from both famous and up-and-coming blues, rock and funk acts. Known as the venue that gave birth to the music culture on Frenchmen Street, The Blue Nile offers an electric listening menu most nights of the week – both in the street-facing showroom and the venue upstairs.

Music Venue
Facebook
Email
Twitter
Pinterest
Copy link
Share
Covered by a larger than life mural of music legend Bob Marley, Café Negril is a vibrant, no-cover music venue located in the heart of Frenchmen Street. Even though most of the bars around the area have transformed drastically over the past decade, this establishment has kept its old spirit of the electric music scene. Beats covered include everything from roots reggae to R&B and rock ‘n’ roll, allowing visitors to spend every minute on the dance floor begging for more. Locals and tourist alike come for the live music, drinks and tacos. Happy hour runs from 5 p.m. to 7 p.m. daily.

Music Venue
Facebook
Email
Twitter
Pinterest
Copy link
Share
Located in Mid-City, Chickie Wah Wah is one of New Orleans premier music bars. With live entertainment almost every night, this smoke-free club is known by locals as one of the best spots to visit if you’re looking for an authentic dance and groove joint. The bar is dedicated to supporting local talent throughout the community, giving proceeds of cover charges to the night’s acts. The bands featured cover everything from live roots to funk music. Chickie Wah Wah offers an extensive menu of BBQ dishes that visitors can enjoy on their outdoor patio, as well as daily happy hour drink specials. 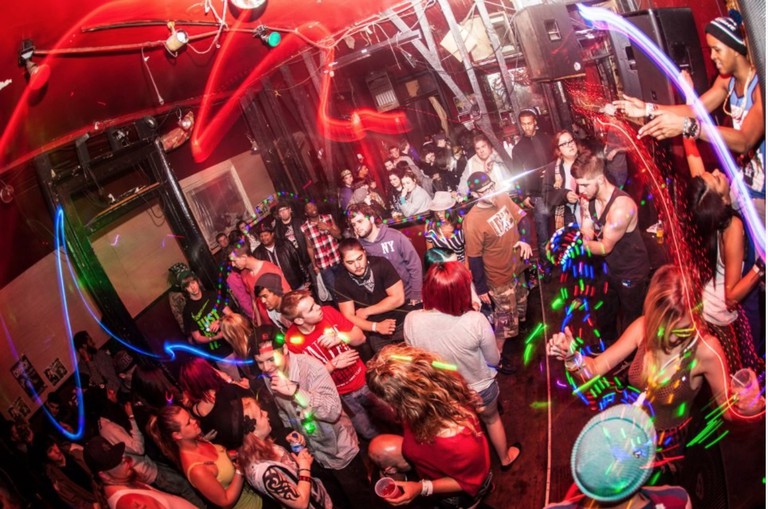 Dragon's Den | Courtesy of Dragon's Den
Once home to famed British occultist Aleister Crowley, the Dragon’s Den is a free and unique live music venue located on the corner of Frenchmen Street. With an opium den vibe, this spot lies in the epicenter of live music every day of the week in New Orleans. The Den is one of the longest running bars on the street and hosts a diverse live music calendar that features everything from reggae, salsa, rock and funk, to hip hop and EDM. With two bars and two live music stages, the venue is a premier spot for culture and dance music. 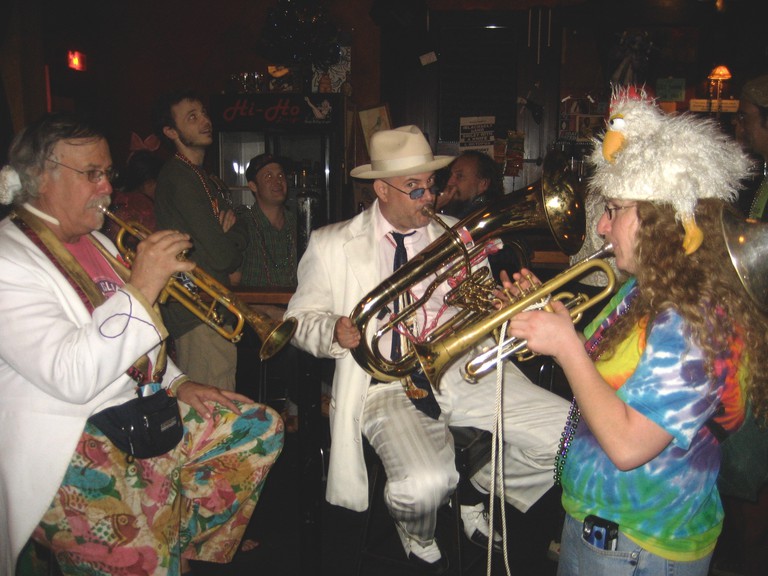 Hi-Ho Lounge | © Infrogmation/WikiCommons
The Hi-Ho Lounge is regarded by locals as an underground alternative live music and arts venue located in the Faubourg Marigny. As one of the original free venues on the street, it hosts live music events every night of the week and prides itself on satisfying any ear. The Hi-Ho Lounge features genres ranging from indie rock, hip hop, electronic, jazz, funk and jam music. Here you can also find burlesque performances, stand-up comedy acts and even documentary and film screenings. Beyond the music, Hi-Ho offers visitors drink specials everyday and inexpensive small plates made with local ingredients. 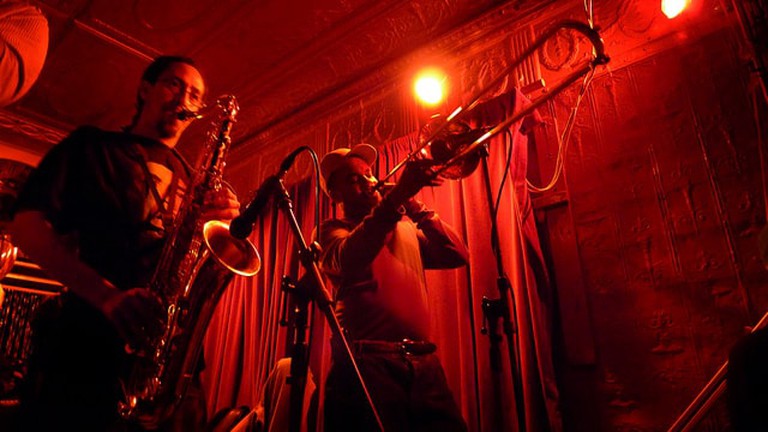 © Stephen Kennedy / Flickr | © Stephen Kennedy / Flickr
Maple Leaf Bar is a casual, local favorite hangout that stays open late and hosts live music till the wee hours, along with their sweaty, adoring fans who cram into this intimate space with reckless abandon. Sometimes dubbed simply, “The Leaf,” this bar and music venue has been a consistent favorite for locals, students from the nearby universities, and visitors, especially on Tuesday nights when it hosts the much-beloved Rebirth Brass Band. Other than being a popular music bar, it also hosts special events, including crawfish boils when it’s seasonably appropriate, and it is the after-party hotspot for the annual “Midsummer Mardi Gras” parade in August.

Mimi’s in the Marigny

Music Venue
Facebook
Email
Twitter
Pinterest
Copy link
Share
Mimi’s in the Marigny is a bi-level neighborhood spot that features live music every night of the week. Downstairs, visitors are surrounded by pool tables, dart boards and vintage video games, while the upstairs is reserved for dancing. The cost-free venue is more of a house party than hot spot, and offers everyone a diverse menu of Spanish-inspired tapas, funky music and authentic New Orleans atmosphere. 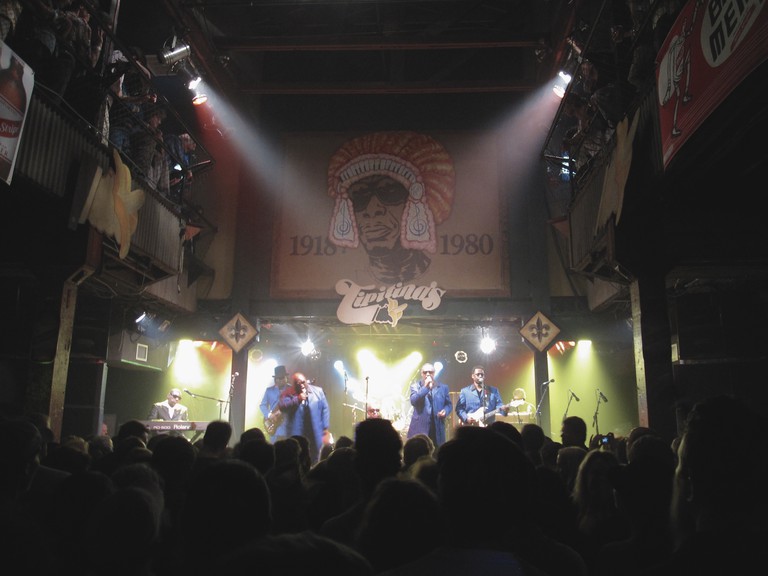 Tipitina's | © Jason S/Wikimedia Commons
Founded as a clubhouse for Professor Longhair (one of the most revered rhythm and blues musicians in the legacy of New Orleans music), Tipitina’s is a neighborhood music joint located in Uptown. Built in 1912, the standing-room-only venue is not only one of the country’s premier music venues, but also serves as a host to “Foundation Free Fridays” — a free concert series that features some of NOLA’s most prominent musicians.