Inherently connected to Louisiana’s hip-hop history, and rooted in New Orleans’ culture, bounce is a style of music that originated in the city’s housing projects and bars during the late 1980s.

Defined by a steady tempo ranging from 95 to 105 beats per minute, heavy brass band beats, and Mardi Gras Indian chants and call-and-response routines, this indigenous music trend is part of New Orleans’ traditions and embedded in the fabric of the city’s diverse communities. 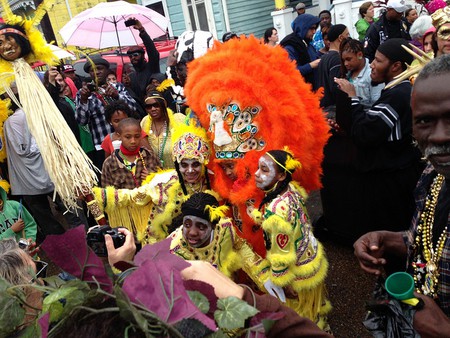 This manifestation of southern roots music has been around for about 20 years and features lyrical patterns that focus mainly on parties and dancing. Bounce can be traced back to 1991 when the efforts of rappers and DJs working in small nightclubs and block parties brought a new life to New Orleans’ own brand of hip-hop.

Bounce was popularized at a club called Ghost Town by MC T Tucker. Amid the local acclaim for Tucker’s crude live recordings, DJ Jimi studio-recorded a full-length album in 1992 titled It’s Jimi for producer Isaac Bolden’s Soulin’ Records, and included both a more polished version of the original song, which he called “(The Original) Where Dey At” and a debut feature by teenage rapper, Juvenile. A year later, DJ Jubilee released “Do the Jubilee All” with Take Fo’ Records, the first label to specialize in Bounce. These high-energy beats went on to become the blueprint for the Bounce scene in NOLA today.

Generally recognized as the first bounce release, these recordings marked a point in time when rap’s southern sub-genre found its own groove in the raw, infectious block-party sounds that eventually influenced artists at the top of the game. Even though the genre’s pioneers were not household names, they were still pivotal in bounce music’s development — mainly because they helped establish the Big Easy as one of the epicenters of the “Dirty South” style.

During the early years, under the direction of locally established record labels and producers such as Cash Money Records’ Bryan “Baby” and Ronald “Slim” Williams, bounce quickly came to dominate the New Orleans hip-hop scene.

By the mid-1990s, this new local style of hip-hop had not only become a staple of music that conveyed the contagious energy of New Orleans, but also served as a gateway for local artists to break into the national mainstream. Selling millions of copies of these records, New Orleans’ artists were able to express their local hip-hop sensibility and reference the city’s housing projects and other poor working-class areas where hip-hop took root.

Beginning around 2000, bounce experienced an emergence of openly gay artists, such as Big Freedia, one of the biggest names in New Orleans bounce music today. Along with artists such as Sissy Nobby and Vockah Redu, Big Freedia shattered stereotypes in hip-hop and has helped the genre become the progressive style it is today.

After the devastation of Hurricane Katrina, bounce music spread around the country as many artists were dispersed to other major cities. Today, elements of bounce can be found in music across the charts: from Beyoncé’s “Get Me Bodied” to Rihanna’s “Pour it Up.”

Beating ruthlessly fast over a sample dance beat and demanding a relationship with its audience, New Orleans bounce, with its rich history of musical traditions, perpetuates the fact that this city fosters some of the most influential and notable African American expressive cultures in the world. A trip to NOLA isn’t complete without visiting a bounce night at Marigny area venues like Siberia and St. Roch Tavern.