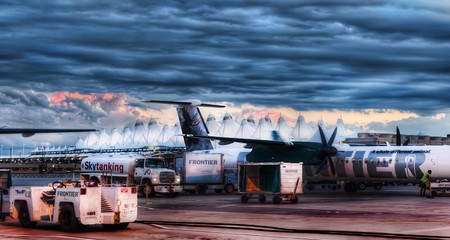 Denver International Airport is one of the more recognizable airports to visit in the United States, with its peaked roof designed to look like the snow-capped Rocky Mountains. It’s also one of the more fascinating airports, with a slew of conspiracy theories surrounding its unique art, architecture, and construction that have fueled the imaginations of airport visitors and internet bloggers alike. Here’s the story behind some of Denver International Airport’s most well-known conspiracy theories.

The airport is controlled by a secret society

There are several reasons this theory has gained popularity. A dedication plaque at the airport’s south entrance bears the symbol of the Freemasons and contains a time capsule. It even mentions something about a New World Airport Commission. There are also symbols throughout the airport that have often been attributed to some hidden language or code. All of this has led to speculation that the airport might be under the control of the New World Order.

The truth is much less exciting. The dedication plaque does have connections to the Freemasons, who also happen to be a legitimate fraternal order. The time capsule, which will be opened in 2094, contains nothing more than a few items of Denver historical significance. And as for that secret language? It’s Navajo. 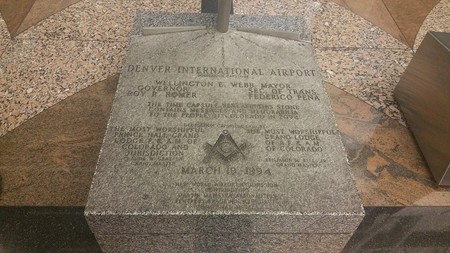 The airport has secret bunkers (and aliens)

Some conspiracy theorists believe there’s a hidden bunker, or bunkers, beneath the airport designed to save the world’s global elite in the event of some kind of doomsday scenario; this also ties into the airport being secretly run by the New World Order. Some of these theorists take it one step further and argue that these underground bunkers also hide evidence of the existence of aliens or Lizard People.

Some of these claims stem from the original contractors who worked on the airport and reported seeing bunker entrances and unexplained tunnels. There’s been an “alien” drawing on the walls and some very blurry footage of “lizard people” on conspiracy websites.

In truth, a pair of 7,000-foot-long (2,134 meters) tunnels run alongside the airport’s underground trains where nearly 1,000 people work each day transporting luggage. Most of the images in the tunnels, including non-nefarious things such as smiley faces, have been added to the walls by the people working down there. And occasionally, airport workers prank each other, and the media, with lizard masks, which might account for some of that grainy footage.

Denver International Airport has an incredible 40-piece public art collection. And according to many conspiracy theorists, the subject matter of this artwork points to the sinister plotting of organizations such as the Illuminati, New World Order, and even the Nazis.

The 28-foot-wide (8.5 meters) murals by artist Leo Tanguma are popular pieces for speculation. Many point to Nazi or fascist imagery in Tanguma’s murals, as well as supposed Freemason iconography. Theorists also point out the gargoyle sculptures near the east- and west-side baggage claim areas and the sense of foreboding they provide. Lastly, the fact that a piece of the 32-foot (9.8-meter), 9,000-pound (4,082-kilogram) outdoor Mustang sculpture near Peña Boulevard fell on and killed its creator Luis Jiménez is clearly some kind of omen. People even call it “Blucifer.”

In reality, Tanguma’s murals tell the story of peace and caring for the environment following times of war and pollution. The murals, Children of the World Dream of Peace, are meant to be read from right to left as a narrative ending in a rainbow. If you look closely at the gargoyle figures, they are popping out of suitcases in a playful display and are longtime symbols of protection. Finally, “Blucifer’s” most notable feature, the red eyes, are just a homage to the artist’s father—a neon sign maker. Nothing demonic about it. 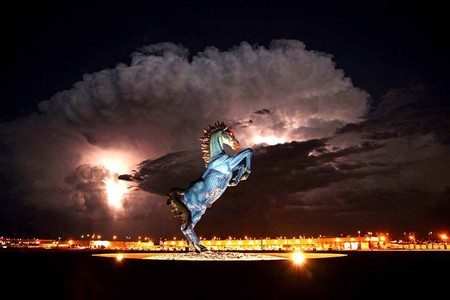