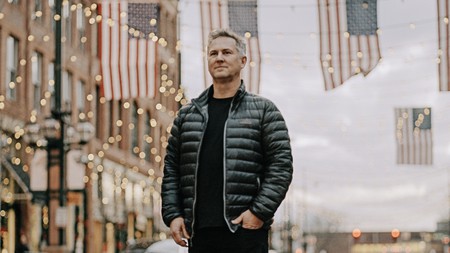 Near the back of house at TAG Restaurant’s flagship location in Larimer Square, a historic block in Denver, Colorado, are seven framed posters, each listing an attribute that makes up owner-chef Troy Guard’s core values: passion, humility, imagination, ownership, courage, caring and harmony. 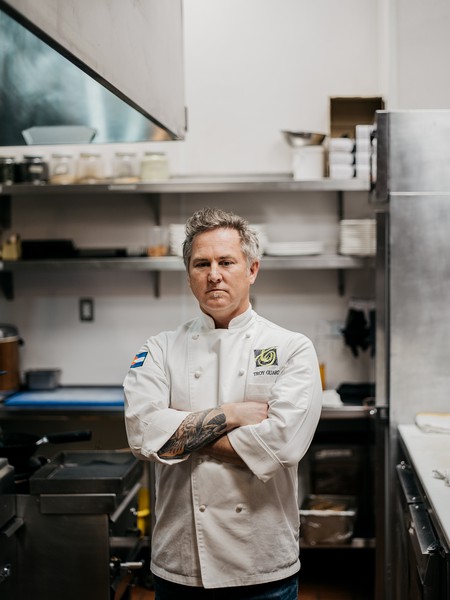 TAG, an acronym of Guard’s initials, first opened in May 2009, and it’s the chef’s willingness to push boundaries that led him to open a total of 12 restaurants, with eight different concepts – from a casual taqueria to a high-end steak house—in the past decade.

“On all the menus, I try to be creative,” says Guard. “I try to get something that we’re familiar with but with a twist. My daughter was eating Pop Rocks one day – I remember when I used to eat Pop Rocks. I mean, how can you not love it and laugh and not [feel] nostalgic? I tried it on the fish and I thought maybe it might be gimmicky, but I think it actually works well, and so we went with it and it’s been one of our top-selling dishes to date.” 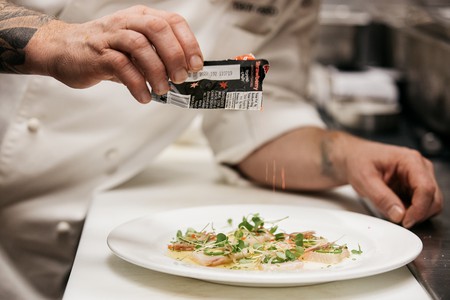 While candy and fish might seem like an incongruous pairing, the inventive combination exemplifies the qualities of imagination and harmony that Guard brings to his Asian-fusion menu. The flash-seared hamachi, which contains sashimi-style yellow tail, is arranged around a plate and topped with jalapeño, microgreens, myoga (an edible Japanese flower bud), yuzu truffle soy sauce and watermelon-flavored Pop Rocks.

Denver has been home for Guard for the past 20 years. He loves the weather and going hiking and skiing with his family, but mentions the landlocked geography – much different from those of the seaside cities he grew up in. 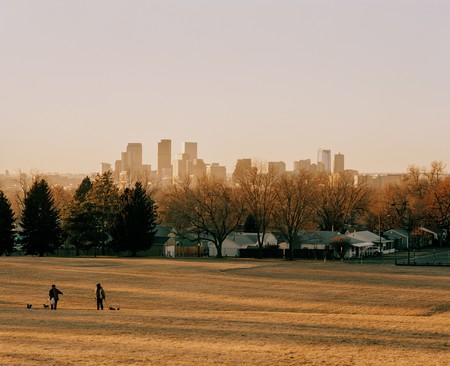 Guard has lived in Denver for the past 20 years. He loves the weather and going hiking and skiing with his family | © Benjamin Rasmussen/ Culture Trip

Guard, who was born in Hawaii in 1971 and spent his formative years in Seattle and San Diego, grew up near the Pacific Ocean. It was the confluence of cultures, along with world travels in his twenties, that opened Guard up to expansive tastes and playful ingredient choices.

“The food culture in Hawaii is amazing. I grew up really eating everything: Japanese, Filipino, Chinese,” he says. “Then when I moved to Seattle, things changed a little bit, a little bit more Americanized: more casseroles or meat and potato dinners. Then when we moved to San Diego – I never really had Mexican food until I was 14 or 15 years old and then being so close to the border I just loved those flavors.” 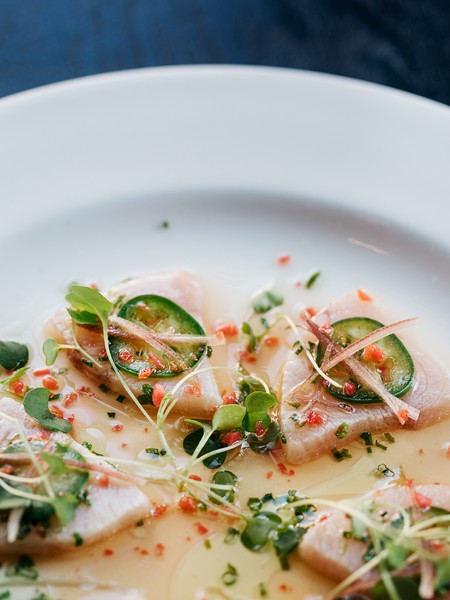 At 16, he got his first restaurant job as a dishwasher. Guard felt a real camaraderie in the kitchen that he likens to a band of brothers or a pirate ship. He tried junior college, but his experience there only solidified for him that cooking was his calling.

Traveling, he says, is also important in his field. Living in Hong Kong and Tokyo over the span of eight years made him appreciate the cultures’ devotion to their rich culinary histories. 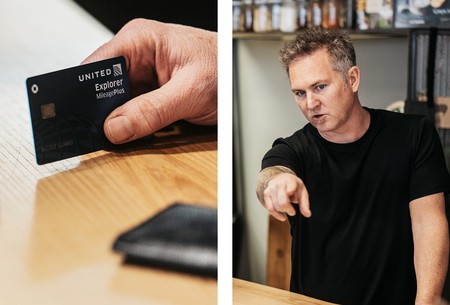 "I became a United Explorer Card member when we started TAG ten and a half years ago," Guard says. "I use that card every day. It's my lifesaver. We use our miles rewards to travel everywhere, whether it's personal, on business—"

“I became a United Explorer Card member when we started TAG ten and a half years ago,” Guard says. “I use that card every day. It’s my lifesaver. We use our miles rewards to travel everywhere, whether it’s personal, on business—”

“Those are thousand-year-old cultures and, you know, [the US’s culture is] only a couple of hundred years old, so [in Asia] they really take food seriously and the flavors and ingredients are things you would never even see here,” says Guard. 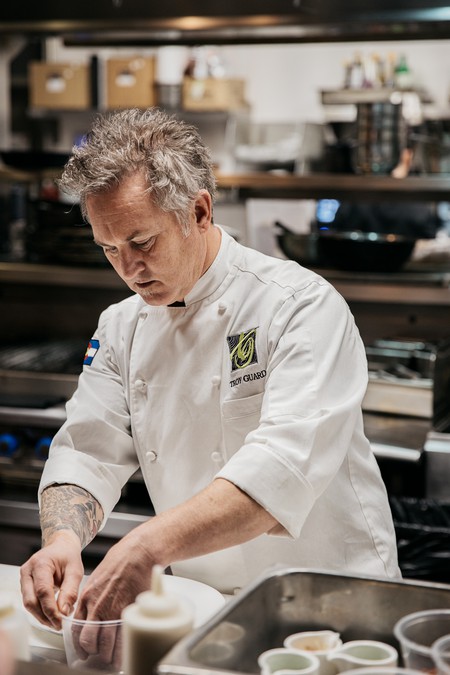 He incorporates those lessons into his food. One of the chef’s signature dishes is The OG Taco Sushi. It’s a melding of his San Diego and Hawaiian roots that never leaves the rotating menu. Guard’s enthusiasm for his food is evident in his bullet-list manner of speaking.

“It’s a sushi roll built into a taco shell,” he explains, “but the shell is a Chinese dumpling wrapper. So we fry that, [and] put [it with] sushi rice, seared ahi tuna, mango salsa with some li hing mui (salty dried plum) that I ate when I was kid, and fresh guacamole. It’s dynamite.”

Guard moved back to Hawaii at 21, and under the tutelage of chef Roy Yamaguchi, with whom he still keeps in touch, he learned the art of balancing flavors. 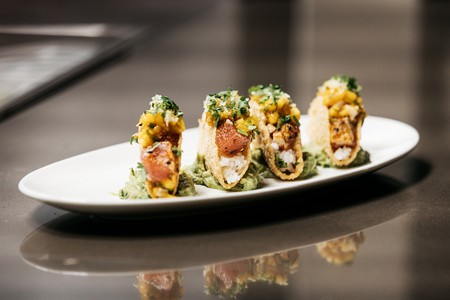 “Roy Yamaguchi is the father of East meets West,” says Guard, recalling his mentor’s legacy. “A lot of people say fusion food is confusion, but if you know how to mix it well, [it works]. I try to go for really bold flavors and I’d be really proud if Roy came to my restaurant and saw the impact he had on me.”

Yamaguchi’s influence is not just apparent in Guard’s food, but in his approach to his legacy. While whipping up Thai chicken, a deboned bird wrapped in a torchon (a type of French cooking cloth) with a chicken sausage then deep-fried, Guard introduced a teenage member of the kitchen staff who he’s taken under his wing. The boy wasn’t much older than Guard was when he first began his career, and so the cycle continues; the mentee has become a mentor.

Guard doesn’t like to brag, but when asked about his charity work he offers this: “One of our core values is humility, but one thing I’m super proud about is last year I was voted in the whole community of Denver the most philanthropic person in [the restaurant scene].” 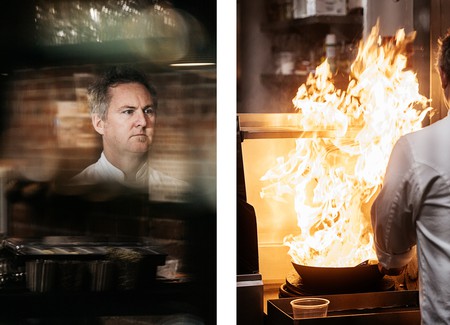 Guard embraces one of his core principles, courage, as he sears food in a blazing pan | © Benjamin Rasmussen / Culture Trip

“We donate and work with over 100 different charities within a year,” Guard continues. “We give back over 100 thousand dollars. I always think of my mentors and what they did for the community and how they taught me and I always think it’s great to give back. It’s, I think, a must.”

When it comes to those core values, caring, it seems, supersedes humility.