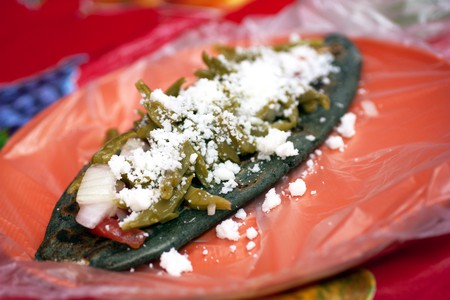 A tlacoyo made with blue corn masa | © bionicgrrrl / flickr

Food lovers know that Mexican cuisine is white-hot worldwide at the moment. Cosme in NYC joined the World’s 50 Best Restaurants list this year, and good luck trying to get a seat at its more casual sister restaurant, Atla, during prime times. Topolobampo, in Chicago, won this year’s James Beard Award for “Outstanding Restaurant.” Noma chose Tulum as the site of its recent pop-up. And Mexico City and Oaxaca have become dining destinations for self-proclaimed foodies in recent years. So it’s no surprise that even the most obscure of Mexican street foods is starting to pop up on plates in America’s larger cities.

Tlacoyos are a popular antojito (literally, “little craving,” or snack food) in Mexico. They’re oval-shaped corn masa patties, filled with beans (or, occasionally, cheese), and crowned with a variety of toppings—usually cheese, salsa, onions, and some sort of meat; anything else is fair game, too.

In Mexico City, you’ll find them being cooked by women alongside the streets, where they’ve set up comales (griddles) over portable stoves. The women form each oval-shaped patty one by one, from a bucket of corn masa (usually you can choose between blue, white, and yellow), and add toppings to order—often a combination of salsa, cheese, and nopales (sliced cactus).

But if you can’t make it to Mexico City, it’s increasingly easy to find tlacoyos north of the border. In New York, you’ll most often catch them in slightly less humble settings. You may have seen them on the menu at the popular Tacos El Chicken food trucks in Kensington and Ditmas Park, or at Rosie’s, or Papatzul, or Fonda, or, the most recent addition, on the breakfast menu at buzzing restaurant Atla, the newest place from chef Enrique Olvera.

Elsewhere in the country, you can find them at Casa Verde in Boston’s neighborhood of Jamaica Plain, or at Gracia in Seattle, or plenty of other places across the nation, especially in the Southwest. At Chilam Balam in Chicago, the menu changes frequently, but time your visit right and you might be able to taste the chorizo and green papaya-topped tlacoyos that charmed the Michelin Guide’s inspectors enough to earn the restaurant a spot on the Bib Gourmands list for 2017.

And if you’re like most other people who’ve encountered them on a menu, you probably wondered what the heck a tlacoyo is, and then ordered something else. Bad move; these snacks are too delicious to be ignored. A server at Atla confirmed the other day that the tlacoyos are not a popular order there; diners, it seems, don’t know what the dish is, and stick to more familiar fare. Which is unfortunate, since the tlacoyos are among the very best things on the menu there.

You don’t need to make that mistake, however; go enjoy that bean-stuffed, salsa-topped tastiness. You know better now.