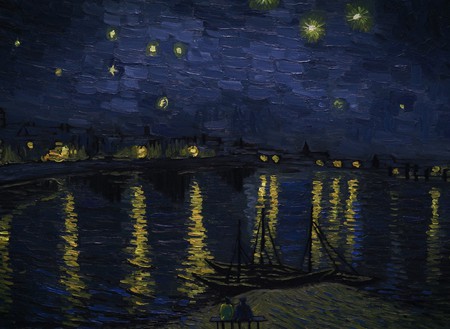 On the evening of December 23, 1888, Vincent van Gogh entered a manic state. His curious fit of anguish prompted an infamous act of self-mutilation, by which he cut off his own ear with a razor blade and nearly bled to death. The following months would be tempestuous, and it’s widely accepted that in July of 1890, the artist committed suicide. But what if he was murdered? Loving Vincent (2017) is not only the world’s first painted feature film, it explores a lesser-known theory that van Gogh did not take his own life, but rather allowed one of his subjects to take it for him.

Loving Vincent investigates van Gogh’s final days through the stories of his painted subjects. From beginning to end, the film is comprised of oil paintings in the artist’s post-impressionistic style, animated by stop-motion. 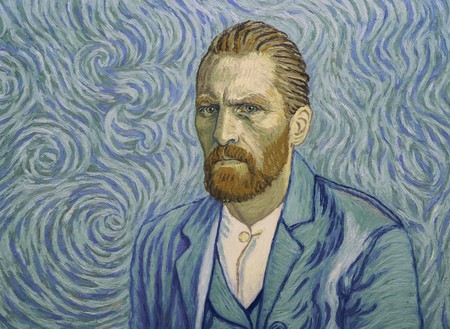 Van Gogh indeed serves as the film’s centerpiece, but Loving Vincent gives the floor to those whom he painted, endowing these historical figures, otherwise bound to silence by their form, with a colorful spectrum of personalities. Together, their accounts of the artist’s demeanor weave a complicated and, at times, tangled web of conflicting narratives that culminate in an ending as inconclusive as it is compelling: that van Gogh was shot by a wayward village boy by the name of René Secrétan, but covered up the wicked act as a suicide in a final gesture of good will. 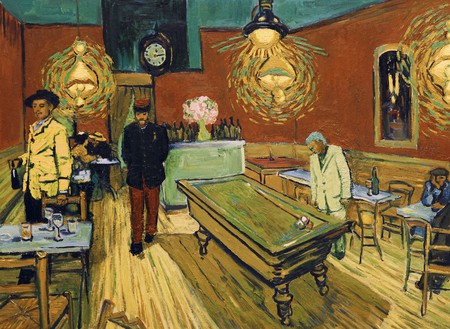 “Douglas Booth plays Armand Roulin, the handsome son of the bearded, burly postman Joseph Roulin (Chris O’Dowd) who befriended van Gogh (Robert Gulaczyk) in Arles,” writes Culture Trip’s film editor, Graham Fuller. “Armand is tasked by his father with delivering the last letter van Gogh wrote to his brother Theo, not knowing that Theo, too, is dead. A pugilistic and disaffected blacksmith’s apprentice, Armand is gradually humanized by his errand as he gradually sees that van Gogh was a kind, soulful man.”

Developing such complex characters from their portraits was no easy feat, but it was a task that Los Angeles-based artist Tiffanie Mang, a concept designer at Bart Kresa Studio, readily accepted when she joined the Loving Vincent production team. Here, Mang tells Culture Trip about the process of creating the world’s first entirely painted feature-length film. 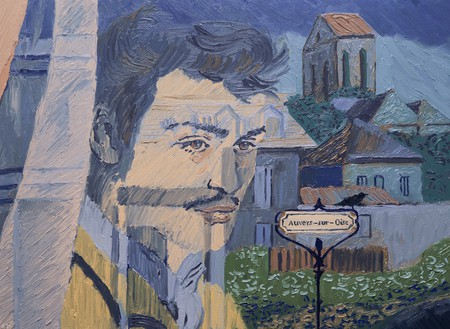 Culture Trip (CT): What role did you play in creating Loving Vincent?

Tiffanie Mang (TM): I was a painter/animator. I worked on the film for six months. I did a total of six shots, [from closeups to wide shots and walk cycles], and animated a variety of characters including Dr. Gachet, Marguerite Gachet, Armand Roulin, and Louise Chevalier.

It was a new experience and a challenge each time, mixing new colors and [executing] the right strokes. I also got to work with the director on creating two original key frames for a couple shots, which is usually only given to two lead painters in the entire studio to do.

By taking immediate reference from van Gogh’s work and other design paintings done by senior painters, I was able to create the first frame and figure out specific lighting and colors, while remaining truthful to van Gogh’s brushstrokes and color palette for those scenes. 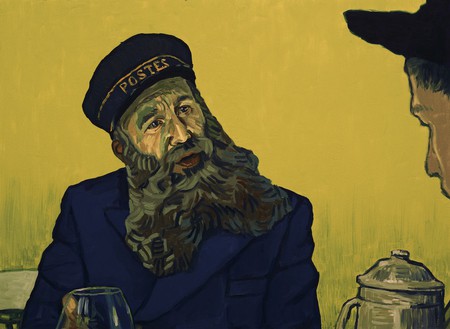 CT: How did you and the other artists prepare to execute paintings in the style of van Gogh?

TM: Prior to testing, I read a book about van Gogh to familiarize myself with his painting style and to get to know him [better] as a person. Reading about his life really helped me connect to him as an artist, and I found myself admiring his insatiable desire to keep experimenting in search of that perfect painting that would resonate with his soul.

Before actually joining production, us painters all went through testing and training, which was strenuous but exciting. It was during this time that the painting supervisor, Piotr Dominik, gave us advice on how to effectively paint in the style of van Gogh, and correctly animate the frames while still remaining true to his paintings. 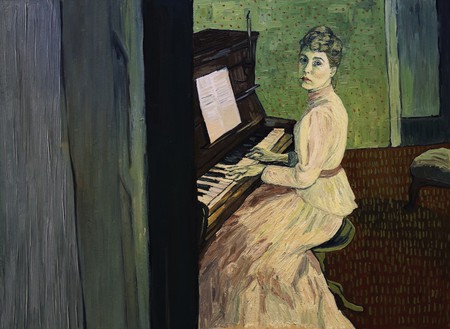 CT: Can you explain the process of creating this film?

TM: Loving Vincent was filmed in live action first for two weeks in London with actors who worked on sets specially constructed to look like van Gogh paintings, or against green screens. This reference footage was used to hand-paint the film frame by frame in oils. Each frame was painted on 67cm by 49cm canvas, and recorded with a Canon 6D digital stills camera at 6k resolution.

CT: How did working on Loving Vincent enlighten your own understanding of van Gogh?

TM: Before working on this film, I knew van Gogh of course, but I never really delved too deeply into his work. [Having read the book about him prior to testing], I was moved so deeply by his unwavering passion that at times, it really made me tear up.

This man, who was despised and mocked by fellow artists of his day, had no idea he would make history. Regardless of being cast aside he remained true to his own vision, pushed through daunting hardship, and didn’t stop painting until his death. That to me is really powerful, and it resonated with me deeply as an artist. He truly lived and died for art itself and nothing else—not fame, not money—just art in its purest form. 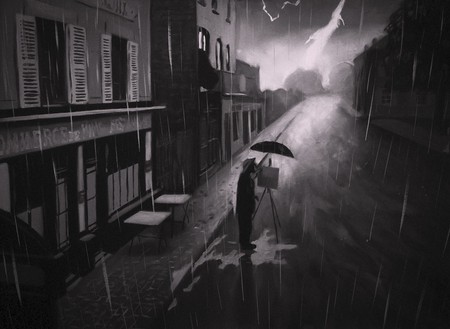 Learning about his life, hardship, and his work made working on Loving Vincent so much more exciting. When I painted each new scene, I found myself analyzing the colors he used in the reference images we got. I love his unconditional use of colors; greens and purples for faces, bright blues for shadows, reds for foliage, etc. His colors and brushstrokes all flow together in an undeniable harmony that is realized when you step back and look at the painting [in its entirety]. His color choices have definitely influenced my personal palette as well, and I find myself drawing back to van Gogh paintings at times for inspiration for my own plein airs.

CT: What happened to all the paintings that were created in the process?

TM: I believe they are selling some of the frames on the official Loving Vincent website, and others will be going to museums and exhibitions for display. 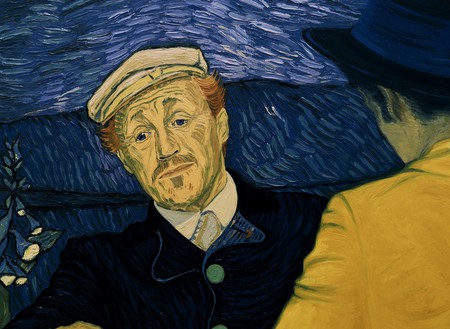 CT: As an artist, what do you hope audiences learn from this film, both about van Gogh as a historical figure, and in terms of appreciating the painstaking labor of the movie’s creation?

TM: I hope that people will appreciate van Gogh more as an artist who struggled, but relentlessly pushed to paint with his heart and soul—and not just as a crazy person who cut off his ear. His work has been [reduced] to just a few well-known pieces such as The Starry Night and Sunflowers, but there are many other paintings he created that are used in this movie—paintings that reveal his skill through so many scenes and landscapes with a unique and striking color palette.

I [also] hope that people will recognize that we had to paint every other frame in the movie on one canvas. There was no multi-layer animation—[we created] a new painting on the same canvas for each frame. Even though the film was made in live-action (which was used to provide us painters with reference for how to compose each scene), we still had to mix all our colors based on design paintings and original van Gogh paintings; figure out how to put down the brushstrokes; and essentially how to bring a van Gogh painting to life. 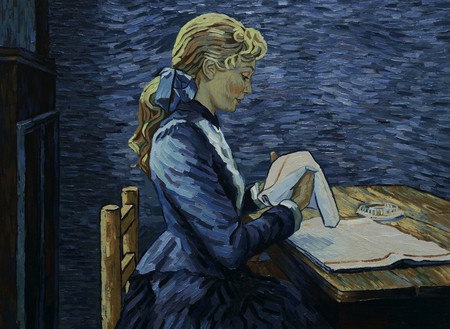 CT: How do you feel Loving Vincent will change the film industry?

TM: Since there has never been a fully hand-painted animated feature film, I believe Loving Vincent has made cinematic history. We have shown people that a project of this grandeur and a seemingly impossible scope can in fact be accomplished. I think nowadays, with most animated features being computer-animated, the release of Loving Vincent reminds us all of how the 2D form of animation cannot be lost and must be preserved. To be honest, I think you can tell the best stories when they are painted with your own hand.

Loving Vincent was released to American audiences on September 22, 2017.