Memoir of a Jacket: Leather as Function and Fetish 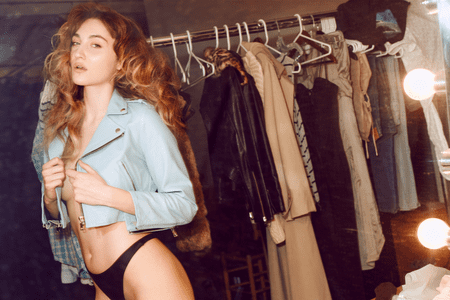 It took me a quarter century before I had the stones to rock a motorcycle jacket.

It fit my body exactly, a rarity. Usually I tailor a jacket, cuff the sleeves being petite and especially small-armed. The sleeves of this leather moto hit my wrist at the perfect spot. The shoulders hung stoically on my frame.

Also, this was the first moment I thought I was the type of woman who could pull off a motorcycle jacket.

Was I that cool?

It was Levi’s, so the quality was solid and its statement, simple.

I started wearing it with everything, leaving it on in bars, with skimpy tank tops and camisoles so I had to keep it on indoors in order to look decent.

Living with my boyfriend in a loft that used to be a thread factory, I was having a The Wild Onemoment. Hippies, musicians, and artists had taken over this building on Tillary Street with fire engine red doors, right off the Brooklyn Bridge. I’d found an ad for the place in the back of The Village Voice in the early 2000s, back when people still found apartments in The Voice. I was an MFA student living across from the Ingersoll Projects, before Jay-Z was a stakeholder in what would become the Barclays Center. 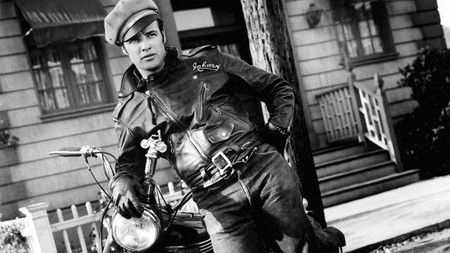 Back then our roof deck was like Shangri-La, with flora growing in a bathtub, a koi pond, terrariums and Japanese lanterns hanging from the water towers, barrels teeming with ferns. Summers saw rose bushes, tomatoes, and an herb garden, set against a view of the Empire State Building on one side, and the Williamsburg Bridge on the other. Sometimes, an occasional junkie or a discharge from the mental hospital down the block slept in the stairwell.

On the fifth floor, a couple had moved out rather quickly, and left behind all sorts of furniture, tchotchkes, and a leather moto. The entire circumstance excited my boyfriend to no end.

He was a hoarder.

What did it mean that he stashed NFL team koozies and antique Christmas tree ornaments, boxes of tattoo magazines, cinder blocks, reams of felt, a broken sewing machine, chemist’s set, empty liquor bottles, all kinds of empty things: empty shoe-bags, empty cigarette packs, empty cans of spray paint—what did it mean that he coveted these things?

I had no idea.

Living with a hoarder acquainted me with the fact that to distinguish between objets d’art and garbage is an exercise in futility.

But I’ll give him this: as a trash-seeker, hoarder boyfriend occasionally came across a treasure or two.

I wore it to have my picture taken for an author photo because I thought it made me look badass. That this jacket had lived a life on some other woman before me rarely entered my thinking about the moto. Its worn-ness made it fit me more intimately. 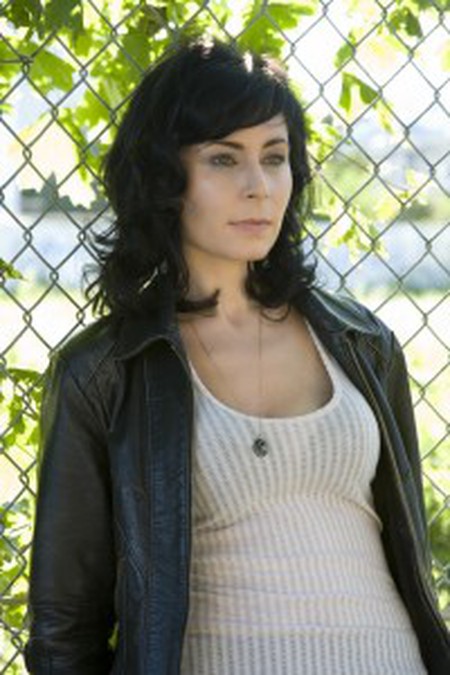 If I’m being frank, I loved the moto because it provided a mold for the woman my boyfriend wanted me to be. As much as he irritated me, as much as his hoarding ways got under my skin, I wanted so much for him to find me lovable. I took the jacket as a stand-in for authentic attachment, because sometimes the desire to be held is insatiable.

Don’t I sound desperate for the moto’s armor to keep me safe? But that’s exactly what the moto was invented to do. Pilots, soldiers and tankers in World War I were the first wearers of the leather moto. Horsehides were abundant because of cavalry, as well as nationalist-minded farmers who donated hides to the military. Another style of the early moto jacket was fashioned with dark brown goatskin, and imitated the style of the A-1 bomber jacket used by the Air Corp prior to World War II. The design was pure aviator—to give its wearer aerodynamic speed—with a short mandarin style collar, fitted waist, and button front closure. 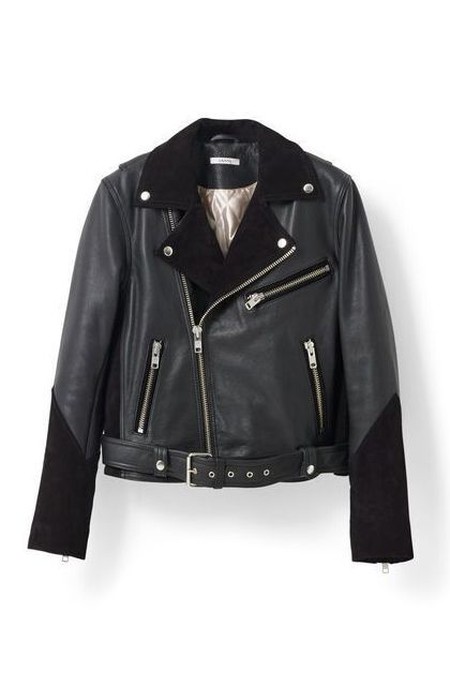 In its classic form, the motorcycle jacket is double-breasted and distinguished by an asymmetric front zipper and prominent lapels. The Art Deco lines and silver accents don’t date the jacket, though this design feature was originated in 1928, by Irving Schott. He called it the Perfecto. A decade and-a-half later, in postwar celebration of hyper-masculinity, Marlon Brando, with his strong jawline and muscles, donned the Perfecto in 1953’s The Wild One, and in the process, defined swagger. That same year, the first color TVs nested in U.S. homes and Elvis Presley was a rising star. Biker clubs drew members, many who were veterans of World War II and disillusioned with post-war America. And so, the leather moto represented masculine independence in a strange mélange of culture and counter culture.

The next decade helped make the moto jacket the uniform for antiheros, rebels without a cause, like James Dean, who was wearing a leather moto at the time of his fatal motor racing crash in 1955.

When I put on my moto, as the jacket enveloped my shoulders, I literally inhabited a second skin. Sacrifice or slaughter, the death of an animal for its hide had occurred and I wore the evidence on my body. The zippers zigzagging across my chest in sync with the lines of the jacket called to mind dancers, shaking castanets, performing in an ancient ritual.

By the 1960s, the leather moto was a staple garment for men who defied the conventions of society: greasers, delinquents, easy riders—with or without a bike gang. You could wear a leather jacket in anytown, U.S.A. and signal anti-establishment, which is a powerful ethos to share with a group. It’s very bonding to have a common enemy, whether it’s an evil landlord or an empire. As the ‘60s drew to a close, empathic gangsters—made iconic in leather moto jackets by The Ramones—emerged, calling to mind London’s punk scene. The 1970s saw a fledging economy, the rise of feminism and gay rights, and the struggles of people trying to enact the hard-won civil rights of the 1960s. All this gave rise to a new kind of bad boy. He now showed shades of vulnerability, even in his leather moto. 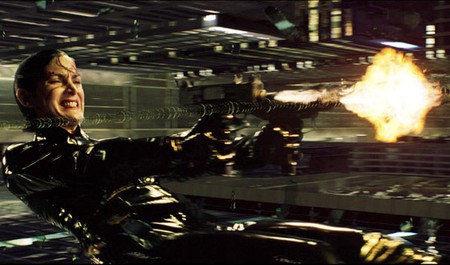 For the leatherman, the leather on his body was a stand-in for the bike and the gang that came with it. The leatherman is an important moment in the history of the leather moto jacket, as it demonstrates how the pliancy of masculinity, an idea that has only recently become mainstream. However, back in the late ‘70s, this moment is best captured with the crossover of heavy metal and gay culture, as Rob Halford, the lead singer of Judas Priest came out as gay, rocking a leather moto.

My moto spoke to my fetish as well, as I liked to have sex with my boyfriend wearing it, heels, and nothing else. The real fetish was not the jacket, but my desire to be sated by substitutes: shells rather than substance.

When I wore the leather moto, I felt him watching me, which translated to him wanting me. Herein lies proof that the male gaze is a thing. Of course the leather is not irrelevant to this anecdote. Leather engages all five senses. It enraptures by how it looks, smells, feels; how it creaks; how it tastes. 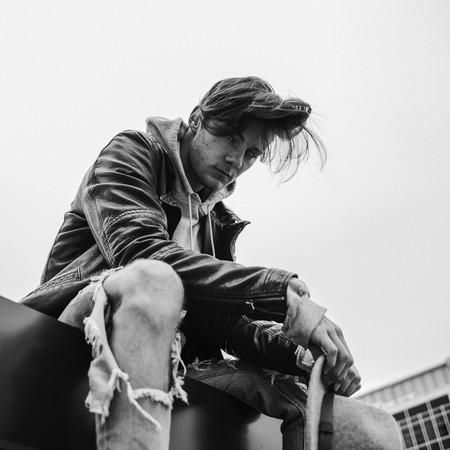 When this boyfriend and I were finally done he left a lot of baggage.

“I ran out of suitcases,” he texted. Might I remind you, he was a hoarder.

Not long ago in a seasonal closet purge, I finally gave up the leather moto. It had a good run. It was a hard sartorial choice, to let go of the perfect fit.

Or, rather, it took a minute to shed my skin. With that maneuver came maturation in my aesthetic. When I was living at the loft, I wanted so badly for my lifestyle to define who I was. The herding of cool is no accident. But it can be all so tedious. Can’t it?

I found a new leather moto in a thrift store in Hudson, New York. Because that’s the thing. There’s always another jacket.