12 Reasons Why You Should Visit Anchorage, Alaska

Downtown Anchorage Skyline | © Justin Connaher / WikiCommons
Alaska is a vast state that is nearly overwhelming in what it has to offer both tourists and locals. As the state’s largest city, Anchorage should definitely be on your list of places to see. Read on to discover our top 12 reasons why!

Referred to simply as “The Coastal Trail,” this 11-mile (17.7-kilometer) path follows the Cook Inlet from Kincaid Park to downtown Anchorage. The trail is perfect for walking, biking, running, and even skiing in the winter. It winds through forested areas, has several overlooks, passes Earthquake Park, showcases the inlet, and even has a spot to stop and watch the airplanes fly directly overhead. There are several access points to the trail, which allow you to choose just how long you want your adventure to last. For those seeking a moose-sighting, start from the Kincaid side. 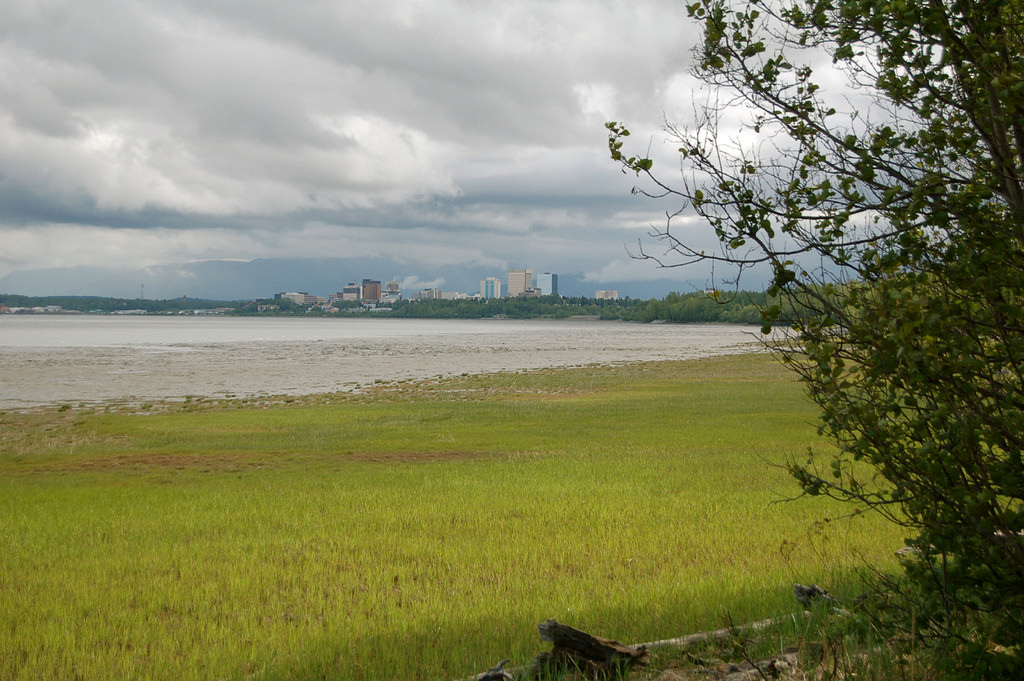 Forest, Park, Zoo
Moose in Kincaid Park | © Doug Brown / Flickr
Before you start your trip down the Coastal Trail, take the time to explore Kincaid Park. These 1,400 acres of forested land boast numerous trails to walk or bike, beautiful vistas, and an Outdoor Center, which people can rent for wedding receptions and barbecues alike. You’re highly likely to see a moose while wandering down the various paths or catch an eagle flying overhead. Kincaid is a great place to escape the main part of the city while remaining within its limits. The Jodhpur Motocross Track also sits within the park’s boundaries, for those with an adventurous side.
More Info
Open In Google Maps
9401 Raspberry Road, Sand Lake, Anchorage, Alaska, 99502, USA
+19073436397
View menu
Visit website
Visit Facebook page
Send an Email
Give us feedback

Alaska Center for the Performing Arts

The Alaska Center for the Performing Arts sits in downtown Anchorage and is the hub for the city’s creativity. The Center consists of a concert hall, two theaters, and various recital and lecture halls. The Discovery Theatre hosts a variety of theatre, opera, dance, and musical performances in an intimate setting that seats 700, while the Sydney Laurence Theatre is roughly half this size and is mainly used for theater and chamber music. The Elvera Voth Hall is an open 1,800-square-foot (167.2-square-meter) space used for recitals, lectures, black box theater, and special events. The largest space is the Atwood Concert Hall. It seats 2,000 people for orchestral performances, dance exhibitions, Broadway musicals, and concerts. Their upcoming events include a concert by Melissa Etheridge, a performance by the Anchorage Symphony, and a production of Cinderella. 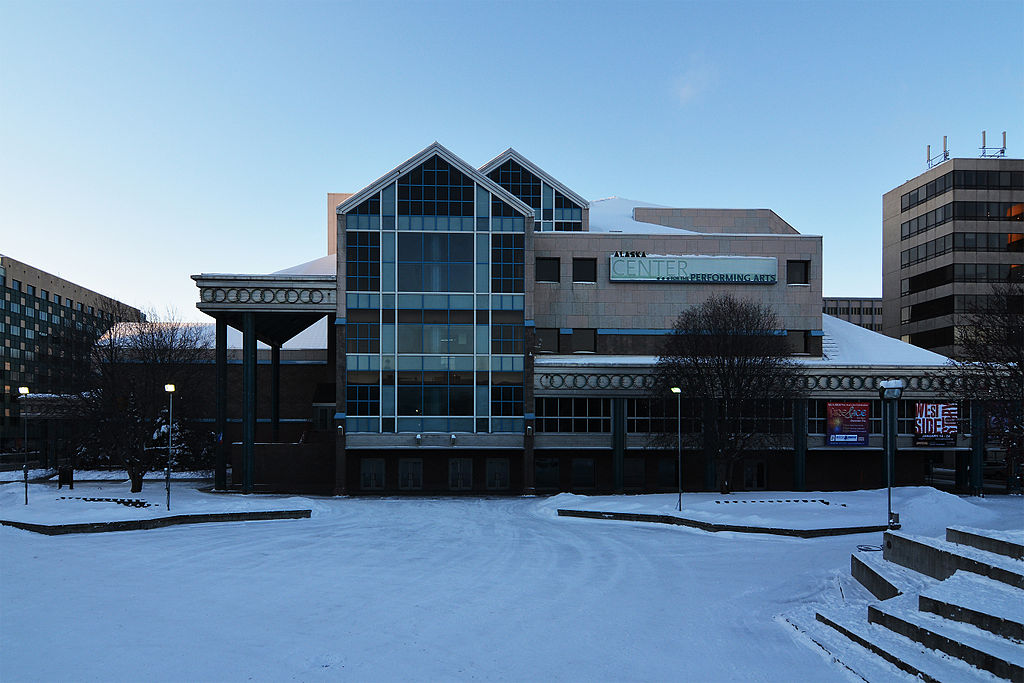 Museum
Anchorage Museum | © Bernt Rostad / WikiCommons
The largest museum in Alaska, the Anchorage Museum dedicates itself to exposing people to the social, political, economic, cultural, historical and artistic aspects of the North. It highlights the present and past of the Alaska Native culture, the Russian-American period, and the circumpolar North. The Discovery Center provides a hands-on experience of art, history, and science for children of all ages, and the planetarium teaches kids about Earth and its solar system. In addition to the exhibitions, the museum offers guided tours, panel discussions, workshops, and creative dance. The museum has been undergoing renovations since the summer of 2016, but it will reopen this fall. Be one of the first to see its newly improved facilities.
More Info
Open In Google Maps
625 C Street, Downtown, Anchorage, Alaska, 99501, USA
+19079299200
View menu
Visit website
Visit Facebook page
Send an Email
Give us feedback

For those who want a hiking experience without leaving the city limits, Flattop Mountain is a perfect place to go. The 3.4-mile (5.5-kilometer) loop provides a moderate hike during the warmer months. There are steps roughly halfway up that provide a break from the dirt trail, and a large flat area sits toward the end, giving hikers a beautiful vista that overlooks the city and the ocean. From here, adventurous folks have the option to climb a rock scramble for an even more incredible viewpoint. For those simply looking for a lovely view, there is an overlook connected to the parking lot that does not require a hike. 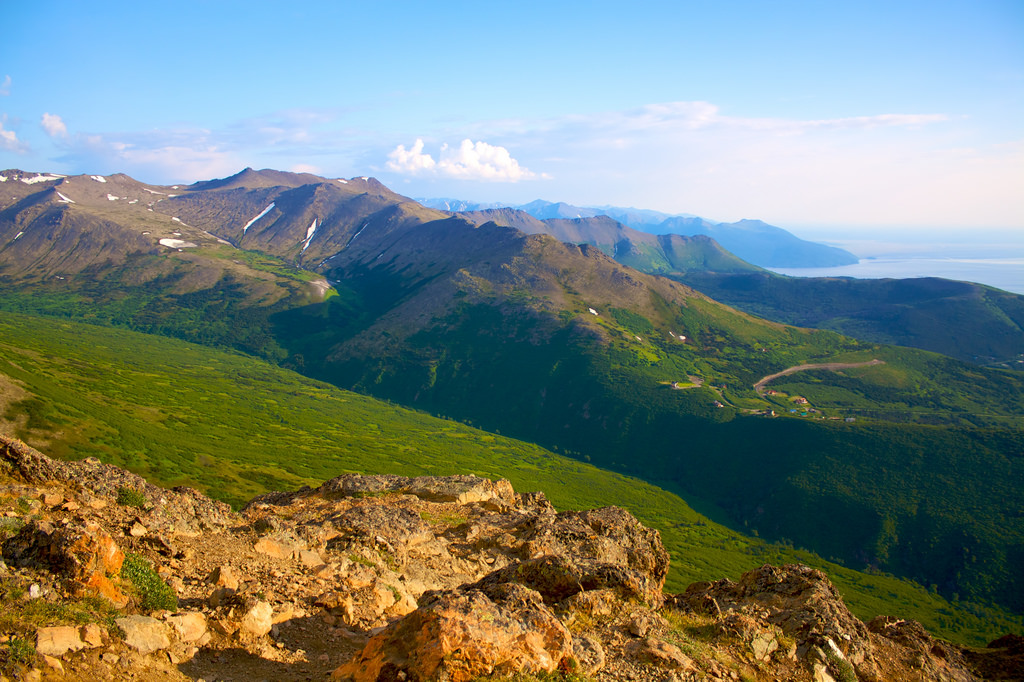 Anchorage boasts a wide variety of bars and pubs. Driven by an eclectic patronage, local bars offer several different ambiance options, from Irish pub to Asian cocktail lounge. Some favorites include F Street Station, where space on a Saturday is standing room only, 49th State Brewery, Kinley’s Restaurant & Bar, Ginger, and the Glacier Brewhouse. For those who like a good local brew, try out one of the Alaskan specialties at the breweries. For those who like unique cocktails, Ginger’s Balkan Spy is the perfect mix of tart and sweet. You could also try a carafe of their Hakutsuru plum wine.

For those who have a love for live music, the Anchorage bar scene offers this secondary benefit. Williwaw is one of Anchorage’s top venues, providing a myriad of musical choices from reggae and folk to open mic night with acoustic guitars and box drums. You can even find the occasional ’90s dance party at this lively bar. Every first Friday of the month, the city’s galleries, boutiques, and restaurants showcase local and visiting artists. Live music is a frequent accompaniment to the displays.

For those who like to bike for fun, or desire to keep up with your daily routine, biking in Anchorage is a treat. There are numerous paved trails to ride, including the Coastal Trail, the Chester Creek Trail, the Campbell Creek Trail, and the Ship Creek Trail. Each provides a beautiful view of Anchorage that you’ll miss if you don’t take the opportunity to explore. Kincaid Park offers 40 additional miles of trails, many of which are single track. Visitors will find bike rentals throughout the city for fairly reasonable rates.

Anchorage boasts several local, small businesses that feature authentic and one-of-a-kind items to commemorate your visit to Alaska. Stop by Grizzly’s Gifts to search for the perfect gift for friends and family back home. If you’re looking for stationery, cards, or fine china, The Kobuk is where you’ll find it. Everyone should have an Alaska ulu knife in their kitchen. Visit The ULU Factory for an introduction to its history, a view of how they’re made, and to buy one to take home. For all of your Alaskan apparel needs, visit AK Starfish Co. for one of their signature sweatshirts. Last, but most certainly not least, make sure you stop by Alaska Wild Berry Products to get a taste of some of the best locally made chocolate and candy in the state.

Mermaid Co. Boutique and AK Starfish Co. are ready for you, Alaska!!! We can't wait to see our friends and family in the Seward Boat Harbor, on the Homer Spit, and in our Anchorage shops on Dimond♥️♥️♥️🌊🇺🇸 Happy Fourth of July, everyone!!! 907.422.0348 for phone orders♥️ Nena & Co. 438.00 #alaskan #fourthofjuly2017🇺🇸 #akstarfishco #mermaidcoboutique #AK #mountmarathon2017

For those with an eye for aviation, or if you’re just looking for a pleasant walk, visit Lake Hood Seaplane Base. The lake is 4.2 miles (6.8 kilometers) around, with a clear path the entire way. With nearly 200 operations a day, Lake Hood is the largest floatplane base in the world. You are guaranteed to see several takeoff and landing maneuvers along your journey. 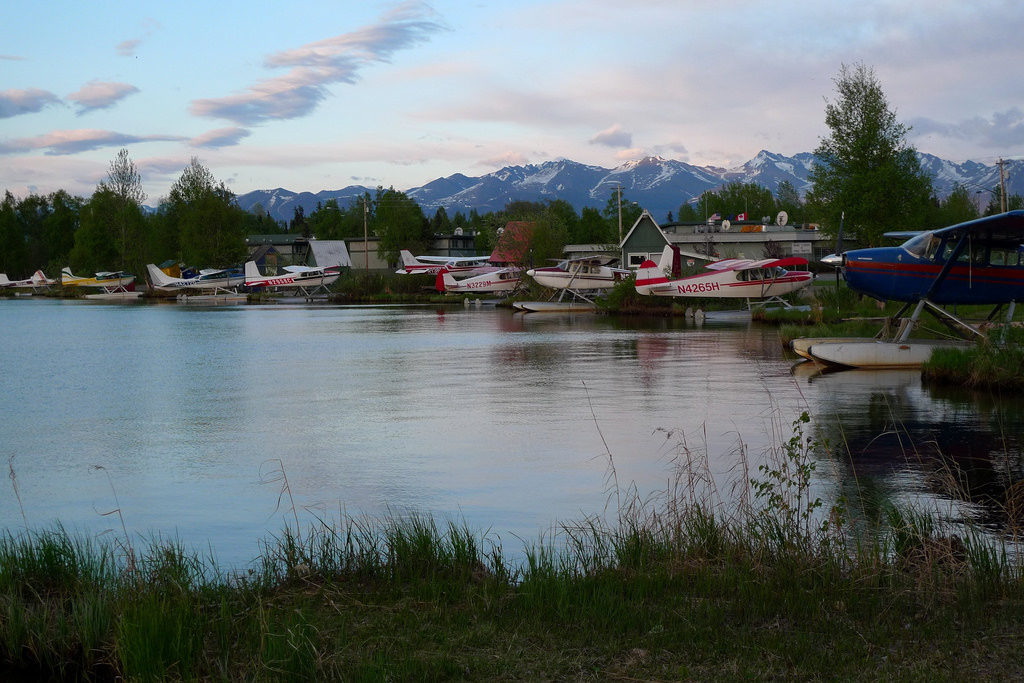 Zoo
Snow Leopard at the Alaska Zoo | © Doug Brown / Flickr
The Alaska Zoo has been around for nearly four decades and is home to orphaned, injured, and captive-born animals. Many of the animals are local wildlife that have been rescued and brought to the zoo for rehabilitation. They include bears, lynx, porcupine, Dall sheep, arctic foxes, and caribou. Other animals you’ll find are tigers, otter, and polar bears. Admission fees are $15 for adults and $7 for children ages 3–17. Children two and under enter for free.
More Info
Open In Google Maps
4731 O'Malley Road, Abbott Loop, Anchorage, Alaska, 99507, USA
+19073463242
View menu
Visit website
Visit Facebook page
Send an Email
Give us feedback

Anchorage is a diverse city with an equally diverse offering of restaurants. Try out Moose’s Tooth for some of the best pizza in Anchorage, with delicious gluten-free options available. The 49th State Brewing Company offers delicious entrées such as the free-range buffalo meatloaf, which you can wash down with one of their signature beers. Tequila 61 is the best place to head for Taco Tuesday. Spenard Roadhouse houses one of the best mac ‘n’ cheese recipes in the city, with the tasty addition of bacon and breadcrumbs. Whatever your taste, Anchorage has a restaurant for you.