The Top Things to See and Do in San Ángel, Mexico City 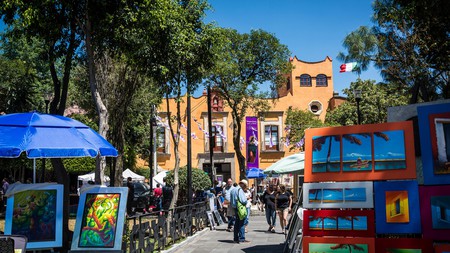 Peaceful and picturesque, San Ángel is a culturally important neighborhood in Mexico City. It houses several art galleries, beautiful churches and artisan markets. Explore the history, culture and colors of this thriving neighborhood with our guide to some of the best attractions in the area.

Architectural Landmark
Facebook
Email
Twitter
Pinterest
Copy link
Share
Plaza San Jacinto marks the heart of San Ángel and is a square well known for having outstanding beauty and bloody history. The square saw the hanging of Irish deserters who, during the Mexican-American War, abandoned the Americans and sided with the Mexicans; a memorial plaque has been placed in the square listing the names of the Irish soldiers. Nowadays this square is home to the Bazaar Sábado, excellent restaurants and many beautiful and historical buildings. 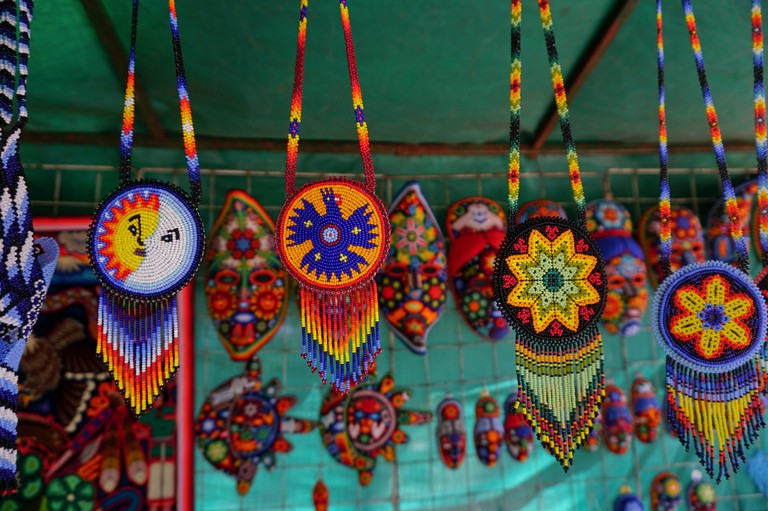 © Cathyrose Melloan / Alamy Stock Photo
It is easy to spend a whole Saturday at El Bazaar Sábado, the lively and upmarket San Ángel bazaar at which the best handicrafts from all over Mexico are available. From fine jewelry and textiles to woodwork and ceramics, this bazaar showcases the skills and styles of the best Mexican artisans. Start the day with a delicious Mexican brunch in the courtyard before heading to the many shops and boutiques clustered together over two floors. Live performers often make appearances, and artists line the streets with their work. 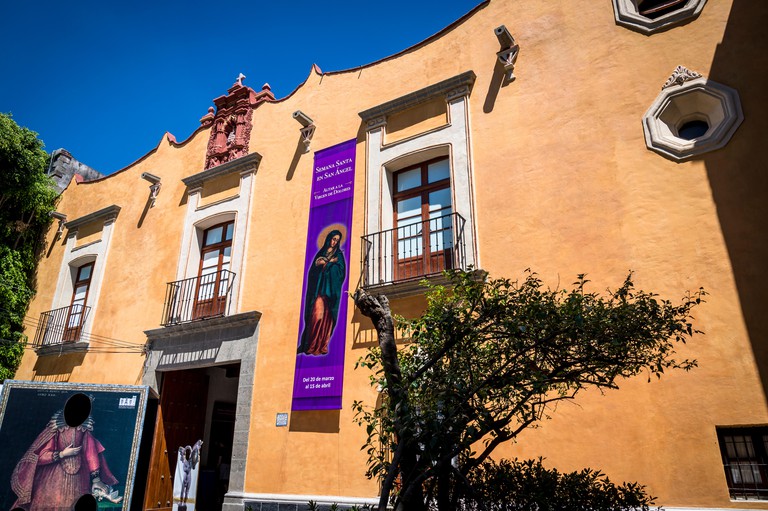 © Bjanka Kadic / Alamy Stock Photo
Museo Casa del Risco is a mansion from the late 17th century and is one of the prettiest houses facing the square. The museum is home to an excellent collection of 17th- and 18th-century European and colonial Mexican artwork. The house, with the collection of art, was donated by the previous owners, Isidro Fabela and his wife Josephine de Fabela, in 1958.

Monastery, Museum
Facebook
Email
Twitter
Pinterest
Copy link
Share
Construction on this monastery began in 1615 and over the years became the place with which the people of San Ángel could identify the most. It has huge gardens, which once contained more than 13,000 fruit-producing trees. The facade and three domes highlight the impressive architectural work, alongside a beautiful bell tower. The temple was turned into a museum in 1955 and now holds a collection of paintings and statues, as well as the mummies of unidentified people.

Museum, Art Gallery, Historical Landmark
Facebook
Email
Twitter
Pinterest
Copy link
Share
The Museo Casa Estudio offers you the chance to see the art studio of the famous Mexican artist and muralist Diego Rivera as well as some of Frida Kahlo’s work. The exhibition sits inside a building designed by Juan O’Gorman, a friend of Rivera, which is among the first functional architectural projects in Latin America. Although it is a small museum, there is a beautiful intimacy between painter and visitor.

Museum
Facebook
Email
Twitter
Pinterest
Copy link
Share
The Museo Soumaya Plaza Loreto is the first installment of two Soumaya museums, the second of which is situated in Polanco. The Museo Soumaya Plaza is in a stunning villa-like building from the colonial era and a sight worth witnessing in itself. The museum, founded in 1994, contains Carlos Slim’s art collection and is dedicated to the protection, investigation and exposition of the displayed works. With four viewing rooms, this museum offers the chance to see prized paintings by celebrated European and Mexican artists.

Church
Facebook
Email
Twitter
Pinterest
Copy link
Share
Nature embraces the Parroquia de San Jacinto, with its picturesque green gardens. Bougainvillea leans on a huge tree, while the church invites you to relax and leave the burdens of life behind in this peaceful haven. Dating back to the end of the 16th century, the Parroquia de San Jacinto, with its bright blue facade and volcanic rock structure, has a feeling of austerity as well as beautiful harmony with its past and present.

Interested in visiting? Book your place on Culture Trip’s five-day Mexico City tour, where our local insider will help guide you through this loud and busy city.