The Best Art and Culture Hotels in Mexico City, Mexico 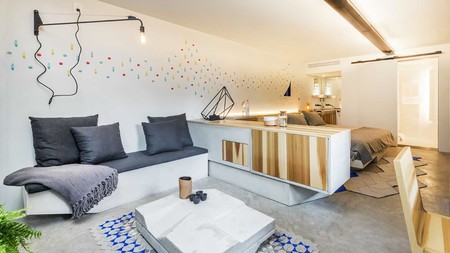 In Mexico City, galleries and museums complement the city’s most uber-trendy hotels to make for a world-class cultural scene. Here’s our pick of the best art and culture hotels in the capital of Mexico – bookable on Culture Trip.

Looking for a boutique experience? Then book Culture Trip’s five-day Mexico City tour, where you’ll be guided through the best the city has to offer by our local insider.

In a capital as artistically, historically and architecturally rich as Mexico City, art lovers and aesthetes will have a ball visiting fantastic museums specializing in anthropology, fine arts and modern masterpieces while diving into diverse neighborhoods. Visitors to the most populous city in North America also have a selection of hotels to match the city’s high-brow, high-altitude aesthetic, with our pick of the best art and culture hubs in Mexico City. 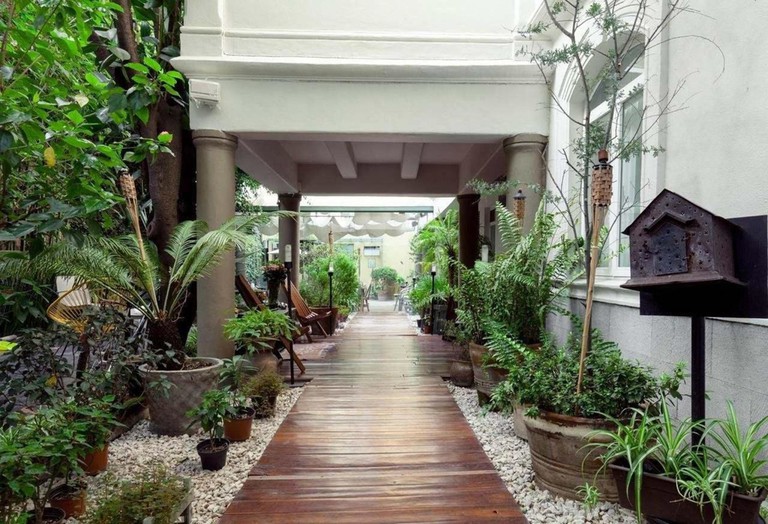 Courtesy of Hotel Villa Condesa / Expedia
In the heart of boho La Condesa, a short walk from the Museo de Arte Moderno, there’s an excellent pedigree behind Hotel Villa Condesa, given its National Institute of Fine Arts artistic heritage status. Aesthetes will adore the renovation of this 15-room property that dates back to the Porfirian era in the late 19th century and was overseen by the institute’s own architects. Free bikes let you explore the sights solo or in a group on a cycling tour. Local culture and history come into focus in the hotel’s roster of regular classes. 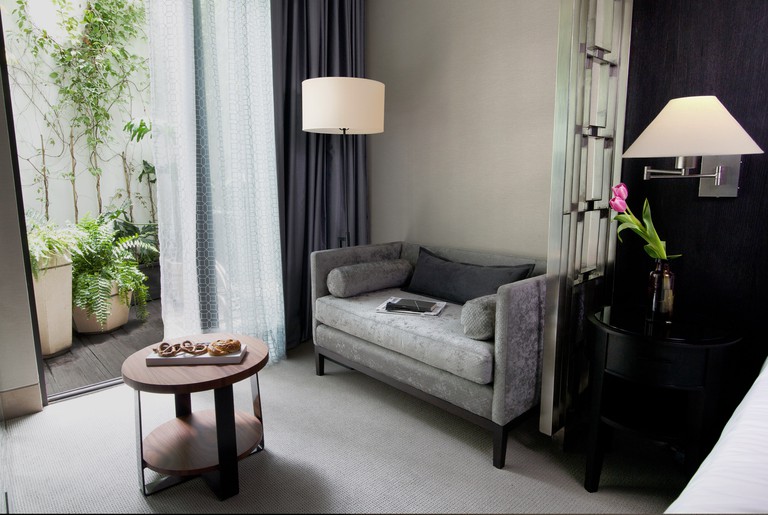 Courtesy of Hippodrome Hotel Condesa / Expedia
In the heart of the buzzing La Condesa district, just opposite Parque México and within walking distance of the National Museum of Anthropology and Chapultepec park, the stylish Hippodrome Hotel’s architecture is a lesson in 1930s art deco design. Rooms and shared spaces were created by Canadian designer Robert Maar. Stop by in-house restaurant Nosh for contemporary Israeli fare such as shakshuka. 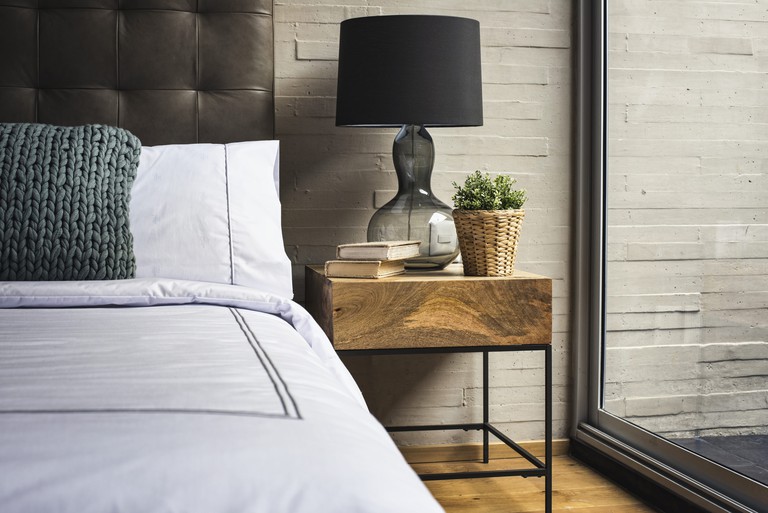 Courtesy of AR 218 Hotel / Expedia
Inspired by the 1930s with local details such as dove-gray Talavera-tiled floors and a black marble fireplace, the look is stylish and muted at AR 218. Found in the heart of Hipódromo Condesa, this boutique property is a short walk from the trendy Roma district. Welcome details across the airy suites include Ralph Lauren linen and a pillow menu. You can make use of the gadget center, which includes adaptors and earphones, just in case you left yours at home. 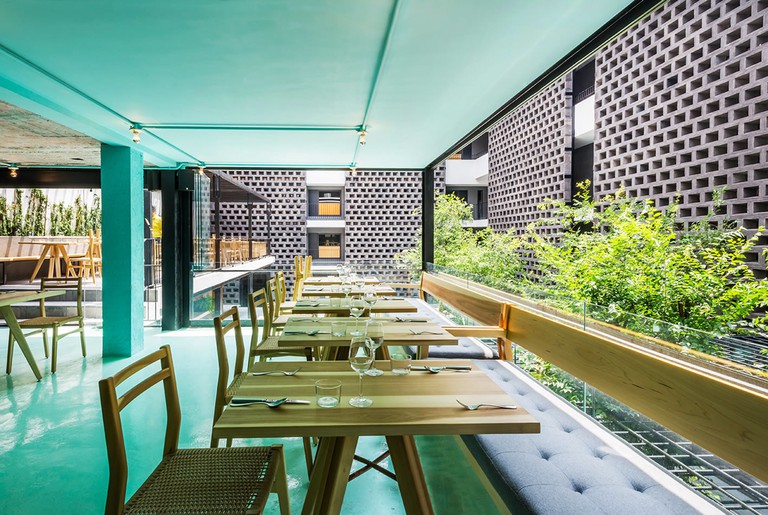 Courtesy of Hotel Carlota / Expedia
With works by prolific local artists hanging in each room, this Cuauhtémoc-located hotel is a veritable patron of the Mexican arts. A bold urban aesthetic is apparent across Hotel Carlota, from exposed brick walls in the suites to poured cement floors – though its design includes natural elements including wooden wall panels, too. Sip a mezcal by the pool in the hotel’s adjoining interior patio before sampling prawn tacos at Kun Restaurant. 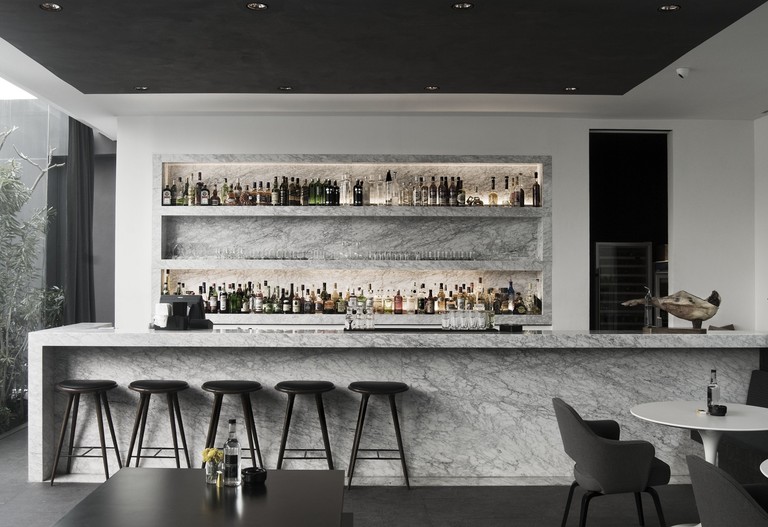 Hotel Distrito Capital is a branch of Grupo Habita, whose unique, quirky hotel designs reflect the individual character of the neighborhoods in which they are located. Rooms at this boutique hotel come complete with retro-modern design furniture and gorgeous hardwood flooring, bringing a distinct sense of warmth to the mostly black-and-white aesthetic of the rooms. This skyscraper-based establishment is in the high-rise district of Santa Fe, and expansive windows in the bedrooms offer sweeping views of the surrounding area. Hotel Distrito Capital provides a peaceful refuge from the city’s bustling activity. 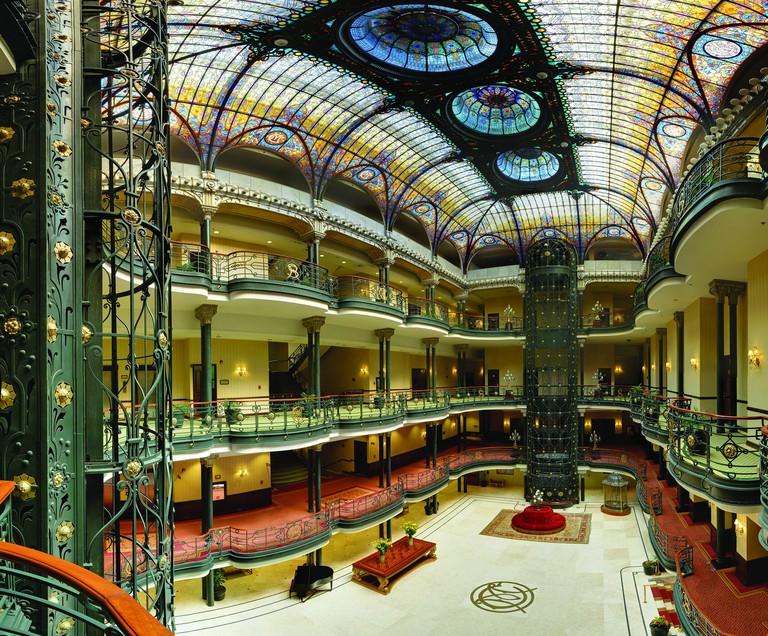 Courtesy of Gran Hotel Ciudad de México / Expedia
Originally constructed between 1895 and 1899 as a Trading Center, Gran Hotel Ciudad de Mexico is a real grande-dame of Mexico City. The central interior space, with its Tiffany stained-glass ceiling, is a prime example of art nouveau design and is considered one of the most exquisite buildings in the capital. This five-star spot also offers the most breathtaking view of the city’s historic center, while the distinguished design of its rooms transports guests to the grandeur of old-world, aristocratic Mexico. 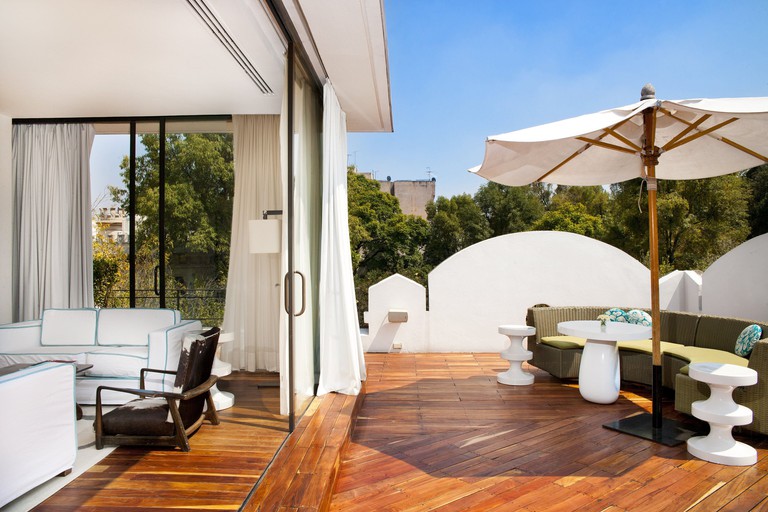 Courtesy of Condesa DF / Expedia
The chosen design aesthetic of the rooms at this Grupo Habita hotel emphasizes clean lines and natural colors, while floor-to-ceiling windows suggest a merging of inside and outside. The fourth-floor terrace bar and restaurant act as a quiet escape where you can enjoy views of the nearby Castle of Chapultepec and España Park. An additional hotel cocktail bar and lounge can be transformed into a movie theater, where you can munch on popcorn or other culinary delights while enjoying featured films. 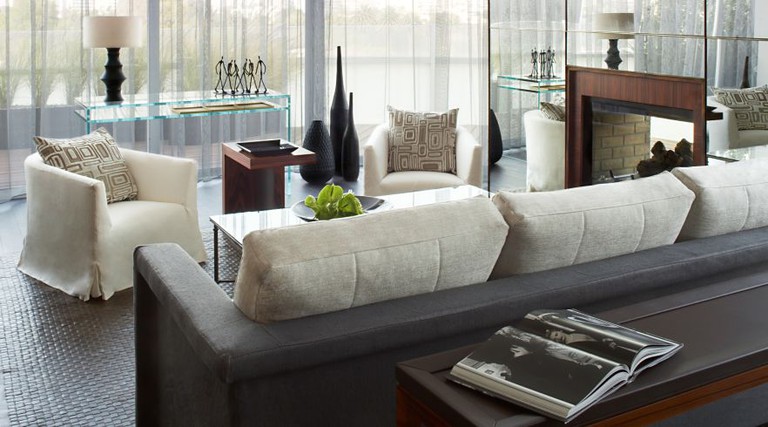 Las Alcobas, translated as “the alcoves,” is set in a former residence that has been transformed into a series of comfy lodgings. It’s in the upscale neighborhood of Polanco, known for its accessibility to a wide variety of museums and entertainment venues, and is surrounded by designer shops. A positively serene environment has been created by the prestigious North American design firm Yabu Pushelberg, responsible for the refurbishment of the 1950s exterior as well as the sleek, comfortable interior. The guest looking for a truly unforgettable stay can opt for one of the three penthouses, which offer wraparound terraces overlooking the city. 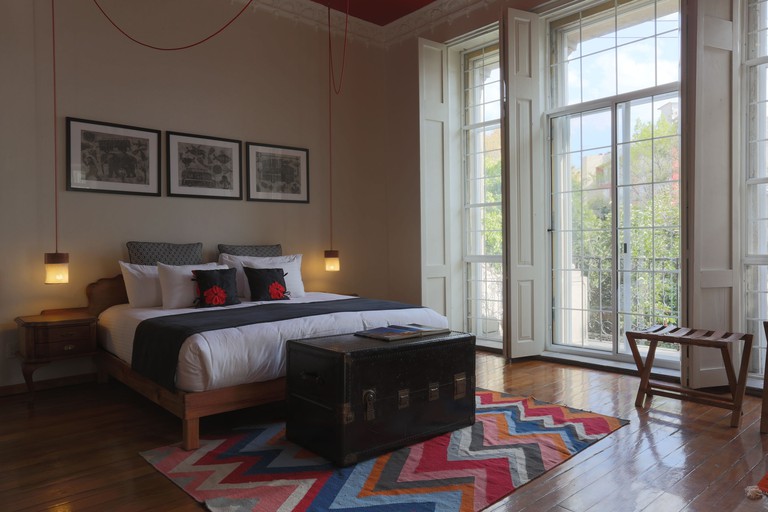 Courtesy of El Patio 77 / Expedia
El Patio 77, built in a grand, refurbished 19th-century home, is the first ecofriendly bed and breakfast in Mexico City. Eight uniquely decorated rooms reflect the cultures of the 32 Mexican states. The hotel is located in the characteristic area of San Rafael, a once upper-class area that was abandoned in the 1970s, leaving the many 19th-century French-style mansions empty. The area is currently experiencing a renaissance, as people continue to rediscover the historic value of these magnificent buildings. 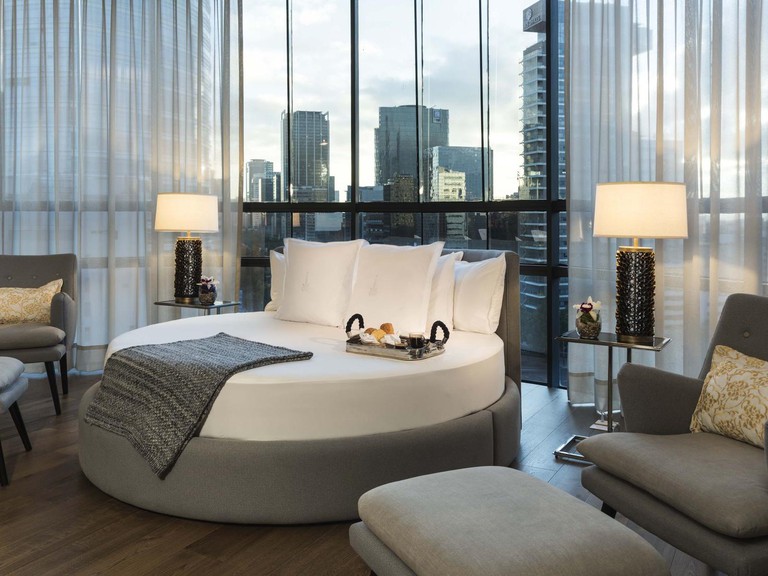 This luxury boutique hotel sits on the wide avenue Paseo de la Reforma, modeled after the great European boulevards in the 1860s. Hotel Marquis Reforma is near some of the city’s most important cultural attractions, such as the National History Museum and the Modern Art Museum, while the hotel itself is art deco-inspired throughout. At Los Canarios, one of three superb restaurants on-site, you can enjoy authentic 19th-century-inspired Mexican-Spanish fusion cuisine. 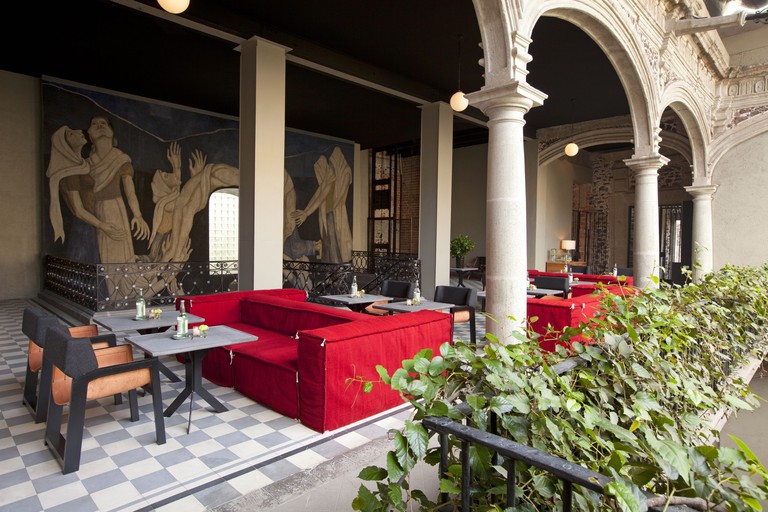 In this Grupo Habita hotel, the culture and history of the area are deeply integrated into the design concept. Downtown Mexico is set in a refurbished, 17th-century viceregal-style building. Antique features, such as vaulted brick ceilings in the guest rooms and ornate iron railings on the main staircase, blend seamlessly with sleek, contemporary furnishings. The resulting space exhibits an unconventional elegance, while down in the lobby and breakfast patio, a captivating fresco by renowned muralist Manuel Rodriguez Lozano adorns the wall. Finally, the rooftop, with its scenic bar and pool area, offers picturesque views of the surrounding colonial architecture. 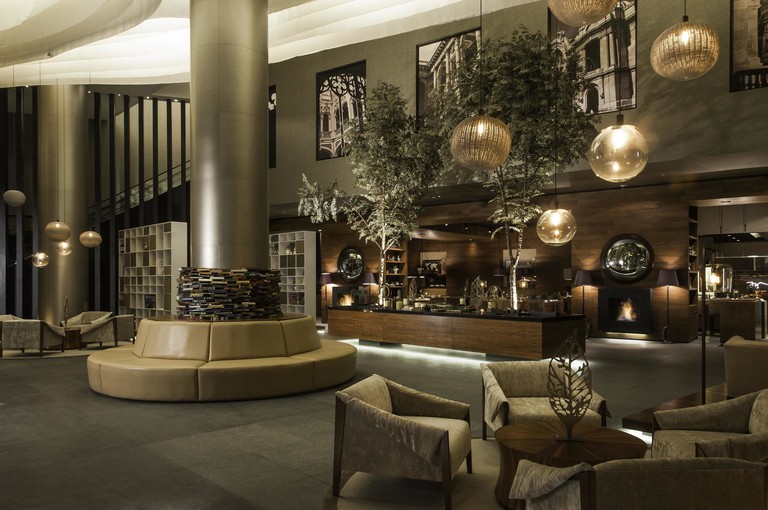