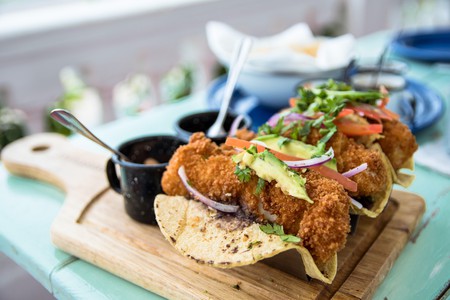 Cancún may be famous for its lively franchise restaurants, but there’s so much more to the city’s food scene. Away from the laminated menu joints there are eateries that serve fresh lobster, imaginative fusion dishes and authentic Mexican food using traditional ingredients such as cuitlacoche (corn truffle) and achiote spice. The tables at these places are usually filled with locals. Here are a few of their favourites.

Vines and punch bowl-pink flowers climb the exposed stone walls of this courtyard restaurant in downtown Cancún. Jars filled with wildflowers top the tables. The menu, which is partly scribbled on a chalkboard the size of a picture window, features dishes from around the world. Argentina-style empanadas share the bill with Swiss fondue and pizzas. There’s one thing every dish has in common, however – they all feature freshly picked ingredients from the restaurant’s garden. 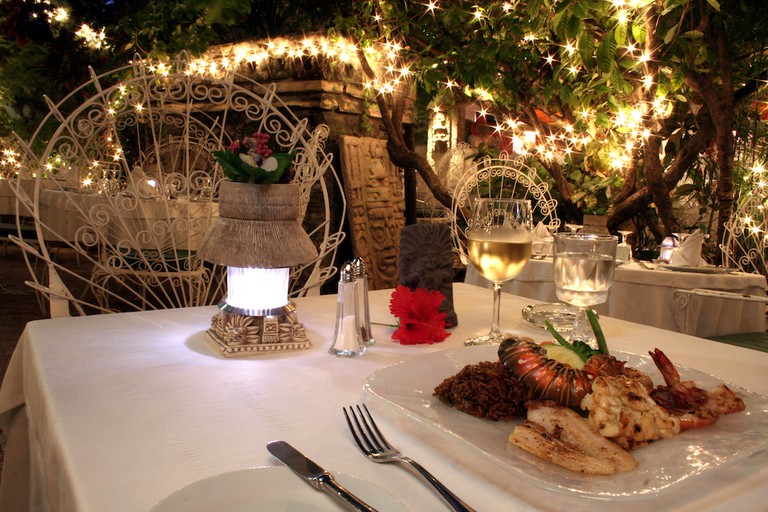 © La Habichuela Downtown | courtesy of La Habichuela Downtown
After more than 40 years of business, La Habichuela has become an institution in downtown Cancún. It’s set inside a thatched-roofed, stone-walled building, which is filled with Mayan sculptures and jungle-style décor. Its melting-pot menu features everything from ravioli to lobster thermidor. Ignore the international stuff, though; go for the cuitlacoche crepes, made with a truffle-like ingredient that grows on corn husks, and the cochinita pibil, a traditional, zesty, Yucatán pork stew. 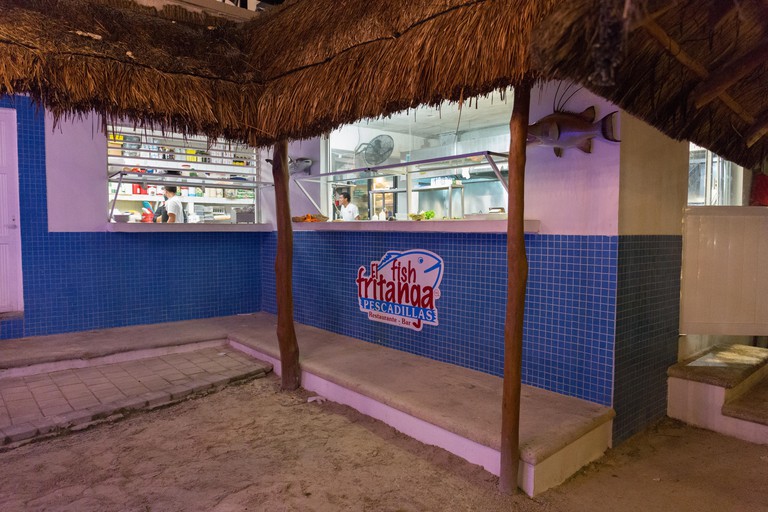 © Ashok Saxena / Alamy Stock Photo
This seafood eatery overlooks the waters of Nichupte Lagoon on Boulevard Kukulcan, to the south of the Hotel Zone. Its tables are set beneath a series of shady, open-sided thatched palapa huts, which are lantern-lit at night. Scents of smoke, spice and citrus accompany the salty aroma of cooking fish in the eatery, as chefs whip up signature dishes such as paprika grilled octopus, orange shrimp and Tikin Xik – a dish of whole fish marinated in Mexico’s peppery achiote spice.

Restaurant, Mexican, $$$
Facebook
Email
Twitter
Pinterest
Copy link
Share
You’ll often see balloons floating above the tables at Bovino’s Churrascaria in downtown Cancun. Locals often come here for birthdays or anniversaries. The eatery is a typical Brazilian steak place. Diners help themselves to a cold buffet, then waistcoated waiters arrive at the tables with swords of beef, lamb and sausage and serve that up, too. Look out for the sledgehammer-sized tomahawks and save room for the coffee-rub picanha steak.

With its plastic tables and chairs, this downtown restaurant may look a little no-frills, but what it lacks in looks it more than makes up for in flavour. The menu revolves around traditional Yucatán food. Try the queso relleno – cheese balls stuffed with mince in a tomato sauce – or the soupa lima – a chicken soup with lime and chilli peppers. Head here for lunch or an early dinner, as it closes at 8pm.

Restaurant, European, Vegetarian
Facebook
Email
Twitter
Pinterest
Copy link
Share
A husband, wife and son team run this red-walled, tiled-floored restaurant near Puerto Cancún. Chef Peter was born in Holland and worked in Europe and the Caribbean before settling in Mexico. The eatery’s menu reflects his roots. His culinary influences collide in dishes like beef brisket with sauerkraut and chipotle potato mash. Locals love the hogfish, which comes pan-seared on a plump pillow of polenta.

Old photos hang at tipsy angles on the walls and long wooden family-sized tables fill the floor in this downtown restaurant. The name of this eatery translates as The Casseroles, and it serves bowls of slow-cooked stews and soups alongside freshly fired tortillas. You might have to queue a little to get in, but dishes like the pozole – a rich soup made from pork, chillies and hominy beans – will make it worth your wait.

The tables at Navios are dotted across a wooden dock that overlooks the Nichupte Lagoon on the southern tip of the Hotel Zone. Head here at dusk to enjoy a tamarind margarita as the sun turns the water to bullion then black. Then take your pick from a Mexican fusion menu; diners rave about the lobster tacos. For something a bit different, try the octopus castacan – a Yucatán dish made with octopus, fried pork skin and the Mexican epazote herb. 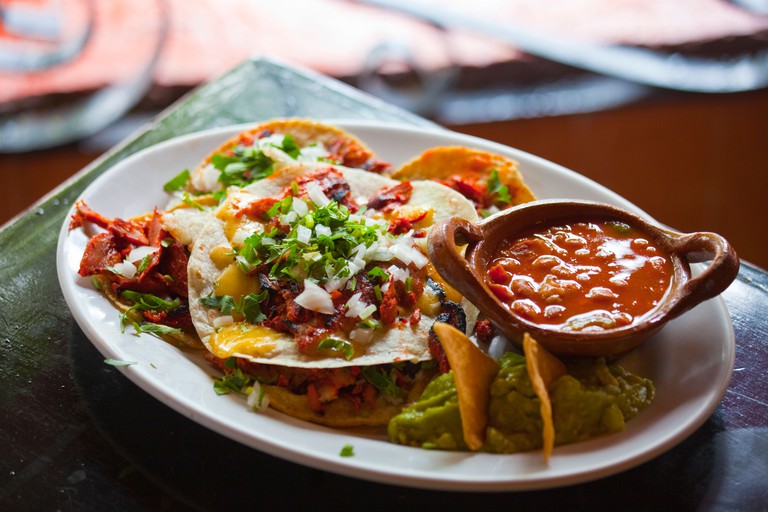 Located on Yaxchilan, one of the main avenues in Cancún, La Parrilla is the best choice when looking for a traditional Mexican restaurant. Founded in 1975, it is almost as old as the foundation of Cancún itself, and is still famous for its wide menu of typical dishes from all over the country, such as tacos, cheese chicharrón, roasted meats and mole. Make a reservation and spend a nice time in a place full of colors and folklore, where Mariachis add a cheerful touch everyday from 7:30pm. You can have a takeaway service or make a reservation.

Checándole is a family-friendly restaurant serving Mexican food with a homemade taste. What locals love is the picturesque environment with the taste of traditional cuisine – food is served on clay dishes, joined by diverse Mexican salsas made of green or red tomato and chile. When you go to Market 28, this is the place to make a stop to eat fajitas, refried beans, breaded chicken or quesadillas. Ask for their popular service called “comida corrida”, which in Mexico is a sort of daily special meal comprising a starter, soup, and main course for a very cheap price. 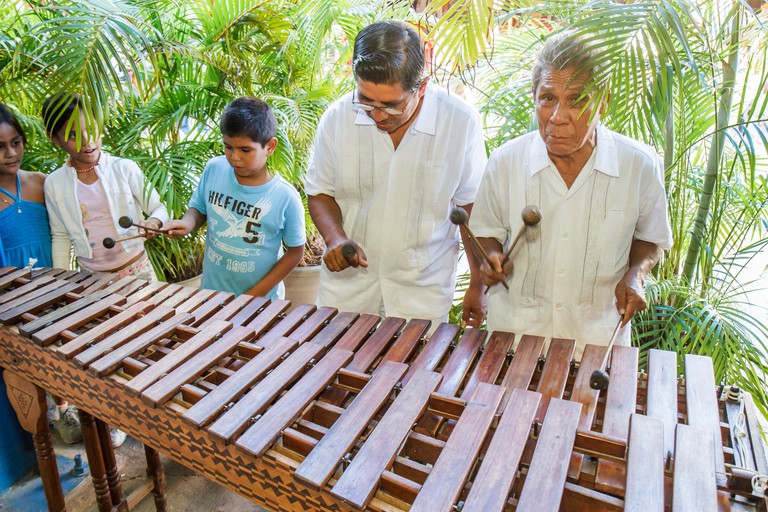 Atotonilco is one of the restaurants in Market 28 that stands out for gathering what in Mexico is called the “3 B”: Bueno (good), Bonito (nice) and Barato (good price). Take typical Mexican food while enjoying the sound of the marimba – a Mexican instrument from the old times – played by two or three men. Have a Deviled steak, flank steak fajitas, stuffed calamari with shrimp, chilaquiles with mole and octopus in yellow sauce. Don’t miss the traditional Tikin Xik, a fish wrapped in a banana leaf, prepared in the Meso-American style. Delicious food, easy place and good service. 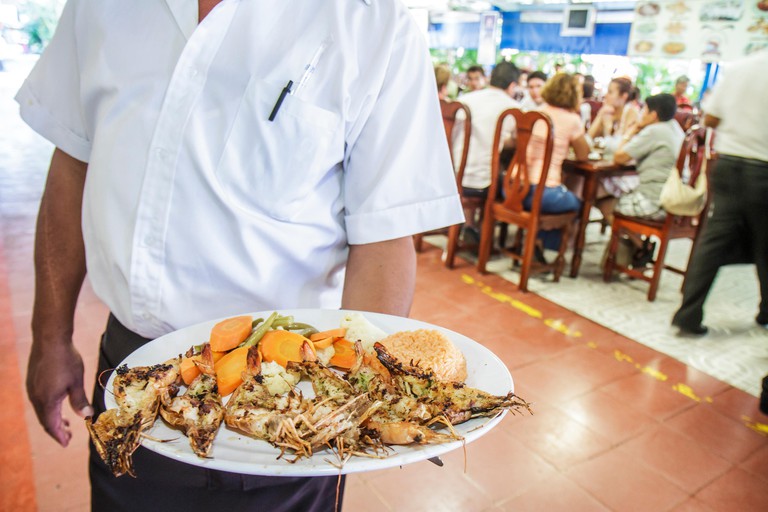 Also located in Market 28, this is a restaurant always full of tourists. There are colorful decorative papers hanging from the ceiling and a marimba brightening the environment. Service is quick and warm, and the food is good and fresh. El Cejas has a varied menu, so what should you try? Shrimp ceviche, lobster, fish fillet and the delightful gratin oysters, but what you shouldn’t miss is the shrimp cocktail with beer – you’ll love it. It’s a place of good taste, price and quality.

This is an updated version of an article originally by Monica Ramirez Lopez.

If you can’t get enough of Mexican fare, then don’t miss out on the best spots for brunch or even the top markets in Cancún. And if you’re looking for somewhere different to stay while you’re in town, why not try a unique boutique hotel or an all-inclusive resort? For adventures further afield, check out the most beautiful destinations in Yucatán.