Things to Do in Downtown Montreal, Canada 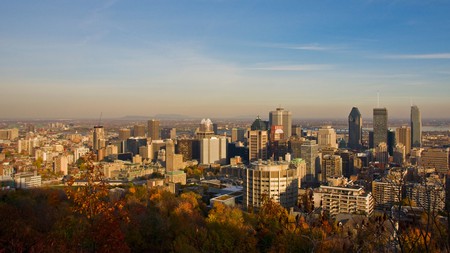 Around every corner in Downtown Montreal is a new experience. There are open-air festivals, cutting-edge bars, sizzling street eats and photo-worthy landmarks all year round. Since there’s a lot of ground to cover, Culture Trip asks their local insiders to round up their top picks so that you don’t have to.

Rue Saint-Catherine has more than just a romantic name. It lies at the heart of the entertainment district and is where Place des Festivals hosts various performances, including the Montreal International Jazz Festival, winter art installations (think pretty lights with a snowy backdrop), classic film screenings and music concerts. The outdoor plaza features the largest interactive fountain in Canada, a synchronized dance of water, light and music. Head here for a night-time stroll, and chances are your evening plans can be made on the go. Recommended by local insider Caitlin Stall-Paquet

Having gone through a facelift in 2019, this sprawling food hall in Place Ville Marie incorporates some of the best flavors from all over the world. Sushi rolls, Lebanese moussaka, Korean fried chicken and citrusy oysters are churned out in classy restaurants by five-star chefs. Once you’ve had your fill, and head upstairs to the beer garden where you can enjoy a drink (or two) under an impressive expanse of a glass ceiling. Recommended by local insider Caitlin Stall-Paquet

The McCord Museum, located a few blocks from Mount Royal Park, covers Canadian history through photograph displays, archaeology and art exhibitions. Visitors are taken through the history of Polaroid cameras and introduced to Cree artist Kent Monkman’s provocative and vivid take on history through paintings. There’s a lot more on display, providing visitors with a keen – if at times unsettling – view into the country’s past. Recommended by local insider Caitlin Stall-Paquet

This 19th-century mansion is the perfect pit stop before or after lunch. The CCA’s founder, Phyllis Lambert, is an architect who believes that architecture is a cultural force and should be a public concern. It houses many exhibit halls, a theater, a bookshop and a library with year-round exhibitions that show how we’re linked to our landscape and the buildings that fill it. At the very least, visitors should walk through the grounds. The sculpture garden, designed by artist Melvin Charney in the 1980s, has perhaps the weirdest collection of miniature buildings impaled on columns we’ve ever seen. Recommended by local insider Tess Boissonneault

The Observatoire Place Ville Marie provides visitors with the chance to see Montreal from more than 600ft (185m) above, offering panoramic views of the city’s famous landmarks, including the Saint Lawrence River, the Mount Royal, the Olympic Stadium and, if it’s a clear day, the mountains of the Eastern Townships. Foodies, fear not, as Les Enfants Terribles restaurant serves specialties such as seared scallops, Quebec pork ribs and the classic poutine. For the uninitiated, that’s fries soaked in gravy and covered in cheese curds. Recommended by local insider Tess Boissonneault