Something Special Brewing on the Reserve: Montreal’s Mohawk Brewery 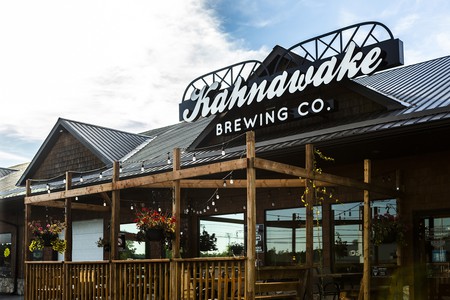 Proudly brewing beer styles from around the world on Native territory, Kahnawake Brewing Co is just a stone’s throw from Montreal and Quebec’s first craft beer venture on an indigenous reserve. With a bustling taproom, restaurant and brewery, KBC aims for rapid-fire creativity, tempting both curious locals and highway travelers to drop by.

The St Lawrence River dominates the geography of the island city of Montreal. Bridges span the kilometer-wide waterway, including the venerable steel arches of the busy Mercier Bridge, which connects the city with the self-governing Mohawk territory of Kahnawake and the suburbs beyond.

The fledgling microbrewery (known locally as KBC) launched in the blustery spring of March 2018 when Matt Deer and Frank Leblanc, locals from Kahnawake, teamed up with experienced brewer Drew Stevens. They transformed their roadside commercial unit into a buzzing establishment with live music and bands, lunch to late-night food and ten taps offering up what Stevens calls a genuine “trip for the beer drinker.” 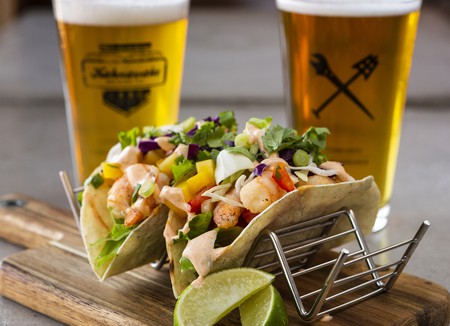 Kahnawake is very much its own place, with the territory largely speaking English as a first language, contrasting with the mostly French-speaking towns that surround it.

A business-friendly community, the reserve has made use of its location and autonomy to carve out economic opportunities for its people. The roughly 19-square-mile (49-sq-km) reserve houses successful online gambling firms, popular casinos, golf courses, steakhouses and bars, appealing to travelers using the busy 138 highway for commuting into Montreal, or journeying to cities like New York or Toronto.

Innovation has long been key to the territory’s relative prosperity. When a new trend, high-quality craft beer caught on across North America, a trio of entrepreneurs made a business play with firm support from the territory’s council. 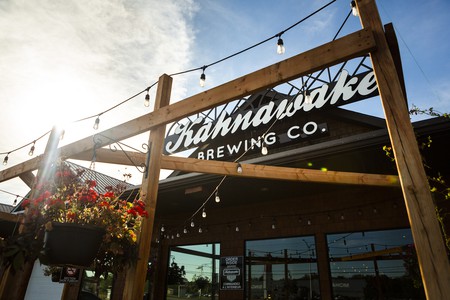 Rather than becoming hyper-focused on a single type of beer, co-founder and head brewer Drew Stevens has drawn on commercial beer sector experience, seven years of home-brewing and a business management qualification from McGill University to ensure the taps at KBC remain highly diverse.

From trusty lagers to rich stouts to juicy collaborations with cult Quebec brewers, every week sees new additions to the roughly dozen ales on tap. Weekly specials at the time of writing include a limed-infused gose, and a strawberry-based beer. 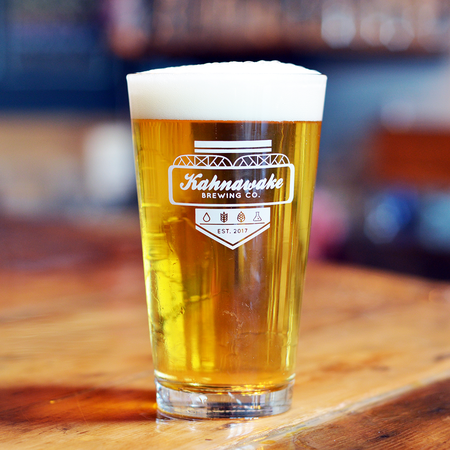 “We definitely have a rapid-fire approach in terms of releasing beers,” explains Stevens. “Our small system allows us to come out with a new beer every week, and keep things interesting.”

It was the discerning drinker, traveling over the Mercier Bridge for a relaxed afternoon of food and distinct beer, that the brewery hoped to appeal to. “Craft beer fanatics will definitely travel for beer,” notes Stevens.

With the traveling beer enthusiast in mind, the business overcame another obstacle: creating a beer production permit in a territory that had never issued one before.

Kahnawake had never had a commercial beer brewed on its territory before. This meant the KBC trio had to engage with the territory’s band council – the basic unit of government for First Nations’ territories in Canada – to draft, review and adopt the brewing legislation, in order to ensure a high-quality product in every respect.

Robust support from the local band council has been crucial to the company’s launch. Working together, the parties used existing provincial guidelines applied to the scale of a territory like Kahnawake.

“The council here, the alcohol control board and the lawyers they have on their teams were super receptive to the plan and what we wanted to do,” notes Stevens. “They really wanted to push the tourism aspect, and saw it as a great opportunity to get people on the territory.”

Once that 18-month long process was complete, the brewery could finally open its doors – but it was presented with another delicate challenge. 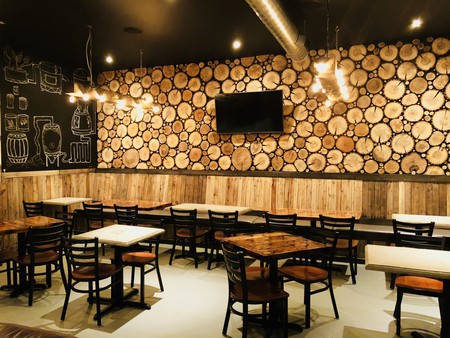 The local council has been supporting the brewery every step of the way | Courtesy of Kahnawake Brewing Co. / © Steve Walsh Photography

While hardcore craft brew fans were more than happy to travel to KBC, many locals on the reserve have long favored American macro light beers, like Bud Light, even over Canadian brands that still dominate Quebec. Advertisements for the big brands, on sale at discount prices, dot the reserve’s gas stations.

KBC knew they had to come up with something that would specifically satisfy their Kahnawake customers. “We knew that we needed a clean and easy beer for those [light beer] drinkers,” Stevens says.

The brewery didn’t have to look far for inspiration. Within a few hundred meters of the brewery, standing parallel to the Mercier Bridge is the old Black Bridge (also known as the Saint-Laurent Railway Bridge), a railway span that flies over the river to the densely populated Montreal neighborhood of Lasalle.

Constructed by Mohawk workers, the bridge was one of the first major infrastructure projects on the reserve. Thus, the brewery’s flagship lagered ale, Bridge Blonde, was born – but not without intensive community testing. 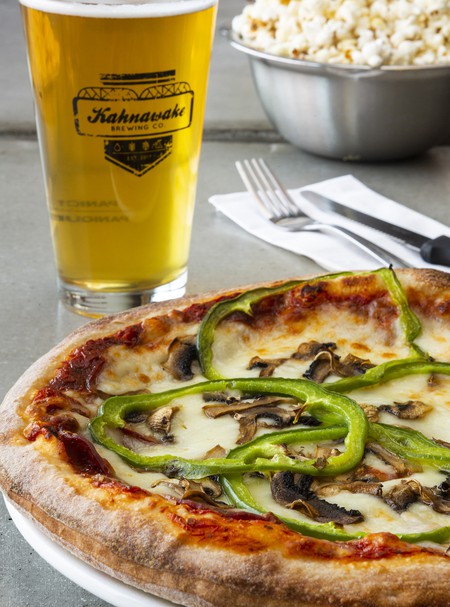 The brewery has worked hard to produce brews that will appeal to the macro beer drinker | Courtesy of Kahnawake Brewing Co. / © Steve Walsh Photography

Blind taste-testing to the max

“We really did a lot of testing on our end to get that as clean and crisp as possible,” recalls Stevens. “We got a panel of friends and family in here before the walls were even painted. We brought in picnic tables and did some blind taste testing, going through five iterations of the beer to see what people thought of each one.”

Not content with that exhaustive process, the brewery went even further, directly pitting the beer against both international and Canadian brands in blind test-tasting sessions. The Bridge Blonde went up against five big-name rivals.

“They didn’t know what beers they were getting, but we…asked them to rate them,” Stevens says. A smile creeps into his voice. “We got 13 out of 15 votes. They’d never even tasted our beer before. They just liked the flavors!”

While KBC can never hope to rival the marketing that the macro brands employ, the beer has clearly been a hit at the KBC bar. The Bridge blonde, like all KBC beers, is only available at the brewery bar but is likely to be amongst the first that the company cans in the future.

“Hopefully, people will continue to corral around something local and fresh,” notes Stevens. “We can offer that at a competitive price, and people will slowly but surely make that switch over.” 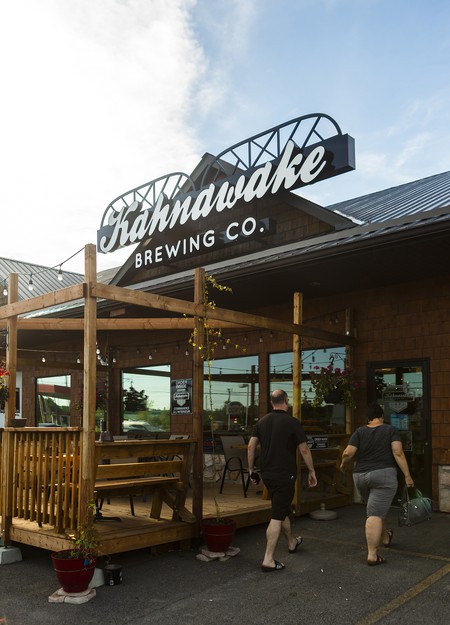 There are plans to distribute across the province in the future | Courtesy of Kahnwake Brewing Co. / © Steve Walsh Photography

Product-focused above all else

With a packed day planned for the brewery’s birthday celebration on March 14, featuring several live music acts, an ambitious food menu and very limited releases of bottled brews, KBC seems to have established itself as a genuine beer outpost.

“There’s an even breakdown,” notes Stevens when asked about the local versus off-reserve clientele, noting that what really brings people through the door is the sense of an event that surrounds live shows and new beers.

Stevens notes that plans are afoot to produce cans for distribution across the province in the future, while continuing to serve a multitude of adventurous beers to all who call to the brewery. “We just want people to come in and enjoy the food and drink. If someone sits down with a tasting flight or two, you’re gonna be taken across the world in terms of beer styles.”

With KBC having just celebrated its second birthday, Stevens can count himself as having delivered on youthful dreams of a career in beer. “I guess I was pretty good at drinking beer,” he recalls of his younger days, “But you know, [brewing] can become a pretty addictive hobby. I guess it’s working out pretty well.”