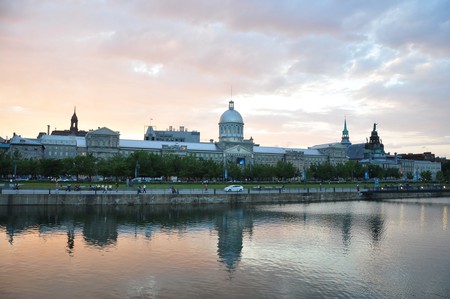 Whether it’s your first date or a celebration of your first decade together, there are plenty of fun and unusual activities for couples in Montreal. Get to know each other and the city better through these date ideas that cover all of Montreal’s intense seasons.

Get your adrenaline pumping on the Tyrolienne MTL Zipline

In the Old Port, thrill-seeking couples can enjoy an exhilarating zipline ride across Île Bonsecours close to the St. Lawrence River. This is the first urban zipline circuit in Canada, and it gives a bird’s eye view of Montreal. You can continue the sky-high theme by going for a drink at one of the nearby rooftop bars in Old Montreal.

Cross-country skiing is a fun winter sport that doesn’t even require leaving the city. Equipment (and a lesson, if needed!) is offered on Mont Royal by Les amis de la Montagne. 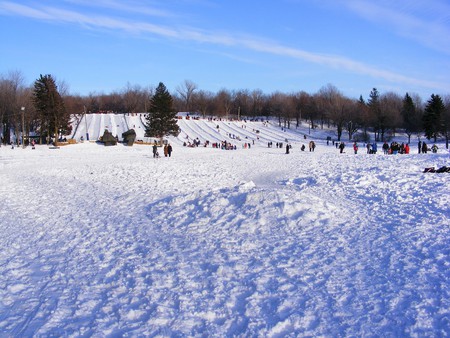 During the late spring and summer, and even well into the autumn, the Montreal Botanical Gardens are a peaceful refuge from the hustle and bustle of the city. Wander arm-in-arm through the well-tended grounds, or attend one of the events put on through the Espace pour la vie complex.

Try your hand at an unusual sport together

Channel your inner lumberjack by trying out some axe throwing at Rage Montreal, an indoor range that offers different axe types and tips (and safety instructions!) from professionals. There is also Tir du Soleil, the only sport and recreational air-gun range in Montreal. Here, you can fire real guns, from rifles and revolvers to combat pistols and even semi-automatic weapons, at either moving or stationary targets. 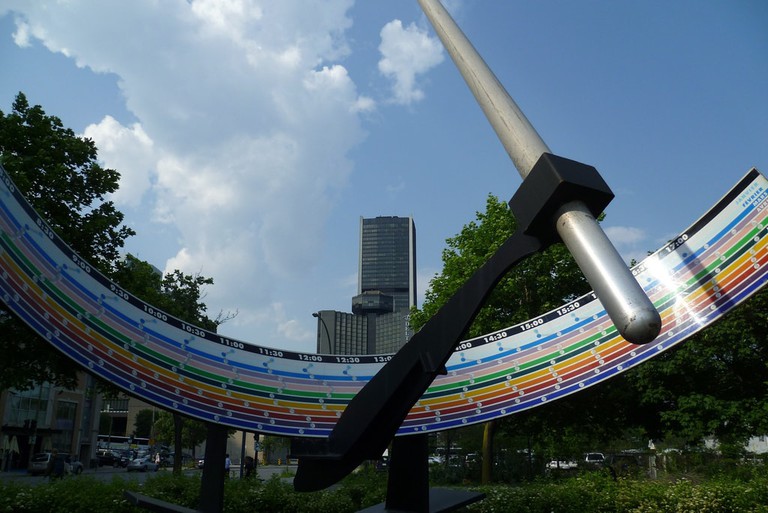 Near the Botanical Gardens you will also find Montreal’s Planetarium, which combines creativity and technology to offer a closer look at the stars and planets. Check ahead for special events and productions.

Go on a walking tour

You can make your nightmares come alive by taking a ghost walking tour in Old Montreal, the city’s historic district. If spooks aren’t your thing, there are other kinds of tours that can be enjoyed as a couple: check out a Montreal craft beer tour or a local food tour to experience some of the best that the city has to offer. 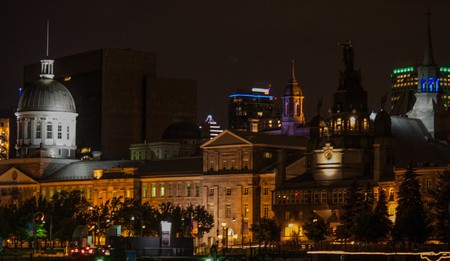 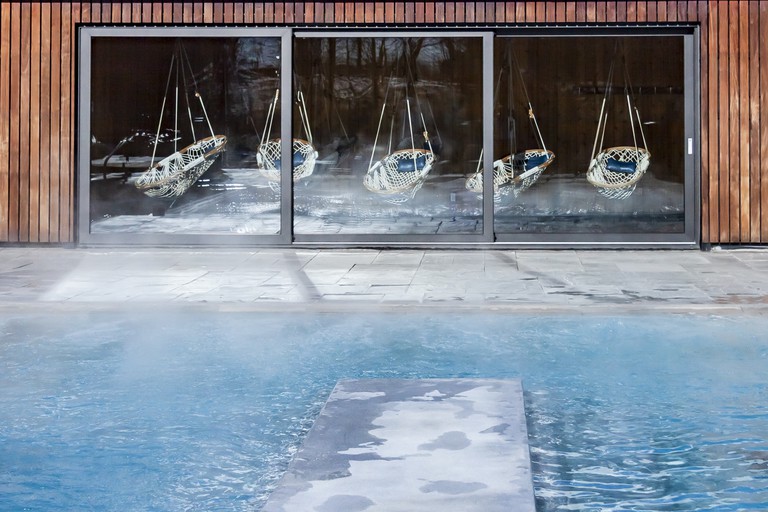 © Ève-Marie Bourget / Courtesy of Bota Bota
Also in the Old Port you’ll find one of the most unusual spas in Montreal, a converted river ferry now known as Bota Bota, spa sur l’eau. Relax together in the partly outdoor Nordic-style water circuit, or indulge in a couples massage—all while enjoying a great view of the city skyline.
Open In Google Maps
McGill Street, Ville-Marie Montreal, Quebec, H2Y 2E2, Canada
+15142840333
Visit Website
Give us feedback

Wander through Mont Royal Park together

Park
Facebook
Email
Twitter
Pinterest
Copy link
Share
Map View
No matter the season, Mont Royal is a nice spot to explore as a couple: the winding, sloped, wooded paths are perfect for strolling hand-in-hand or for scaling breathlessly by bike. At the top, the belvedere offers a beautiful view that overlooks the downtown area, as well as a glimpse of the St. Lawrence River beyond. It’s beautiful at any time of year, and especially on certain nights during the summer, when the city puts on impressive fireworks that are presented by different countries.
Open In Google Maps
Ville-Marie Montreal, Quebec, H2W 1S8, Canada
Give us feedback

Montreal comes alive with festivals in the summer. From the International Jazz Festival to Just for Laughs, weekly outdoor techno concerts to a mural show, there are plenty of reasons to spend an afternoon or evening together. 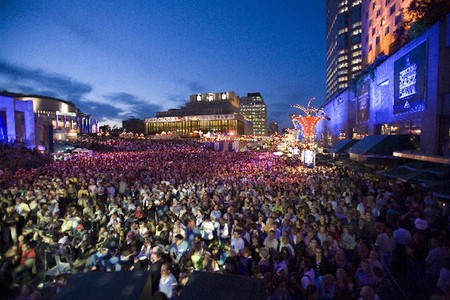 Get classy at a secret speakeasy

There are a few “secret” bars around Montreal that are inspired by the classic speakeasies of the 1920s. With their often difficult-to-spot locations, well-dressed waiters, low lighting, and jazz-bluesy soundtracks, they’re the perfect opportunity to get a bit dressed up and pretend you’re in a different era.

Amusement Park, Park
Facebook
Email
Twitter
Pinterest
Copy link
Share
Map View
La Ronde, Montreal’s only amusement park, is open from mid-May to late October. Operated by Six Flags, it’s the largest amusement park in Quebec, and the second largest in Canada. It’s the perfect date for a weekend afternoon, where you can enjoy roller coasters and other rides together.
Open In Google Maps
Ville-Marie Montreal, Quebec, Canada
Give us feedback

Laugh until you cry at a comedy show

Every summer, Montreal hosts Just for Laughs, one of the biggest comedy festivals in the world. For the rest of the year, you can have a fun date at The Comedy Nest. Tucked away near downtown Montreal, this place has been in operation for 30 years, and has been named one of the top 15 comedy clubs in North America. With a variety of intimate shows throughout the week, including Tuesdays and Wednesdays, it’s a great option for a light-hearted date night.

There are many natural areas around the island of Montreal where you can enjoy a nature walk. The Morgan Arboretum, for example, is a peaceful nature conservation area in Sainte-Anne-de-Bellevue, on McGill University’s Macdonald Campus. Criss-crossed with easy forested hikes, you can enjoy a nature retreat within a stone’s throw of the city together, and then go for dinner along the waterfront. It’s especially beautiful during the autumn, as the leaves start to change. 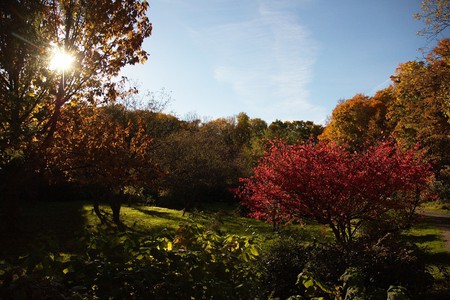 During the summer months, you can go paddleboating, kayaking, or canoeing together at a few different locations around the city, including Beaver Lake on Mont Royal, Parc Jean Drapeau, the Old Port, or the Lachine Canal. 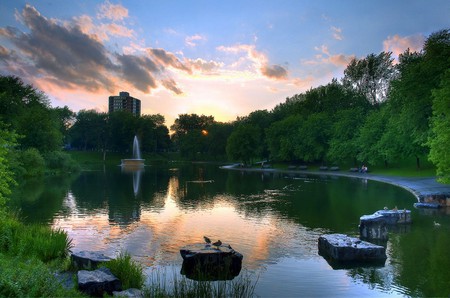 Love video games? Head over to Arcade MTL on Rue St. Denis. With an entry fee of $7, you can explore around 20 machines and retro video game consoles. Enjoy a microbrewery beer or thematic cocktail as you play games like Mortal Kombat II, Ms Pac-Man, Tetris, and many more.

Shakespeare-in-the-Park gathers over 12,000 people in green spaces in and around Montreal every summer. Bring a blanket or fold-up chair and curl up together for a magical performance on a warm summer night.

Enjoy a dance party on ice at Natrel Skating Rink 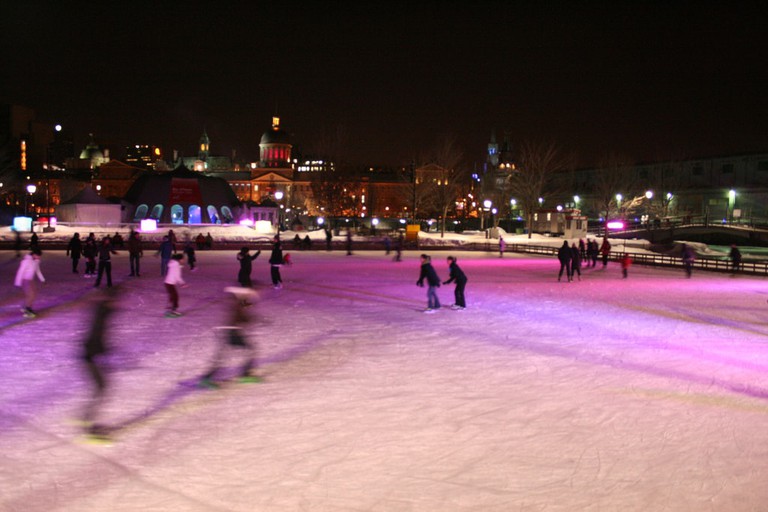 Skating in the Old Port, Montreal | © Craige Moore / Flickr
A fun winter date that involves braving the cold together is to head to the ice rink in the Old Port for some skating. Every winter, the Natrel Rink hosts themed nights with a festive atmosphere, turning the rink into something more like a dance floor.
Open In Google Maps
Old Port of Montreal, Ville-Marie Montreal, Quebec, Canada
Visit Website
Give us feedback

Have a picnic with the Tam Tams

The Tams are a beloved Montreal tradition, bringing together hundreds of drummers, dancers, vendors, performers, and picnickers around the George-Étienne Cartier Monument in Mont Royal Park every Sunday afternoon during summer. Stop at a nearby shop for some snacks, bring a blanket, and enjoy the summer sun and laid-back yet festive atmosphere together. 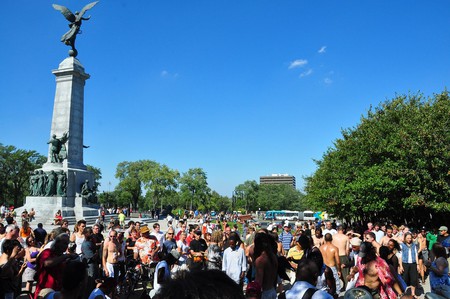 The Tam Tams in Montreal | © abdallahh/ Flickr
Give us feedback