Six Thoughts About the Golden Globes' "Time's Up" Night 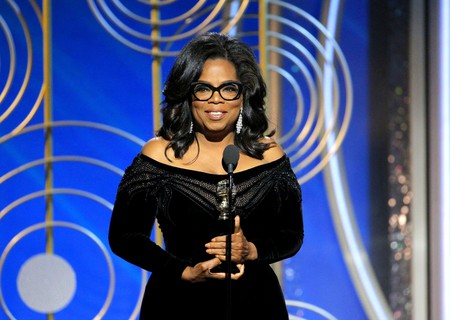 More far-reaching than a protest, the triumphant “Time’s Up” initiative at the Golden Globes ceremony felt like a watershed moment for ending sexual harassment and abuse in the workplace—and not just in Hollywood.

Oprah Winfrey’s speech—more presidential than anything we’ve heard from the White House since Barack Obama left office—sounded a crucial note of inclusivity by reminding us that abuse and harassment are not restricted to the elite American entertainment industry.

It is a story “that transcends any culture, geography, race, religion, politics, or workplace,” Winfrey said. “So I want tonight to express gratitude to all the women who have endured years of abuse and assault because they, like my mother, had children to feed and bills to pay and dreams to pursue. They’re the women whose names we’ll never know. They are domestic workers and farm workers. They are working in factories and they work in restaurants and they’re in academia, engineering, medicine, and science. They’re part of the world of tech and politics and business. They’re our athletes in the Olympics and they’re our soldiers in the military.” 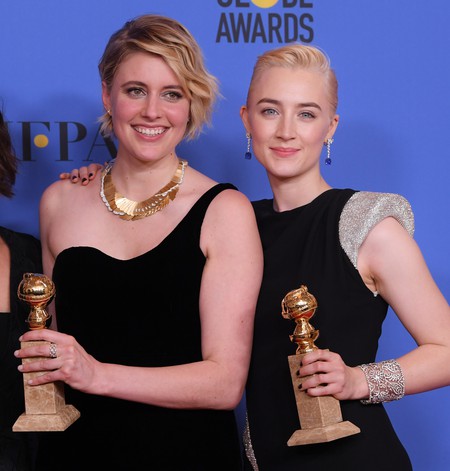 Introducing the nominees for Best Director of a Motion Picture, Natalie Portman tartly remarked that they were all men. Barbra Streisand commented that no woman has won the Best Director Globe since she won it for Yentl in 1984. Their points are well taken—and Lady Bird director Greta Gerwig clearly should have been nominated for this year’s award. Prizes should always be given on merit, not as a tokenist gesture. However, the broader issue here is that until women get more opportunities to direct, male directors are likely to continue to dominate movie awards.

The Globe wins for Three Billboards Outside Ebbing, Missouri; The Handmaid’s Tale; and Big Little Lies were especially heartening. Three Billboards is set in the aftermath of a teenager’s rape and murder; Handmaid’s is a futuristic vision of the institutionalization of rape and enforced childbirth; Big Little Lies depicts domestic abuse and marital rape. Probably more people will end up seeing these dramas and absorbing their messages than are currently aware of the “#Me Too” campaign and the “Time’s Up” movement. More consciousness-raising through films and television will enable the “Time’s Up” legal defense fund to grow exponentially.

The black dress code for the Globes encouraged by Reese Witherspoon and Eva Longoria was questioned by one of NBC’s red-carpet interviewers as potentially “funereal.” Rather, it added tremendous glamour and force. In any case, Kate Hudson, Mariah Carey, and Catherine Zeta-Jones, who wore different types of décolletage, defiantly bucked the idea that black is somber and the idea that women should suppress the urge to cover up if they don’t want to.

Three Billboards’ Frances McDormand, meanwhile, dressed in unfashionable navy blue and gave one of the most rousing speeches of the evening. 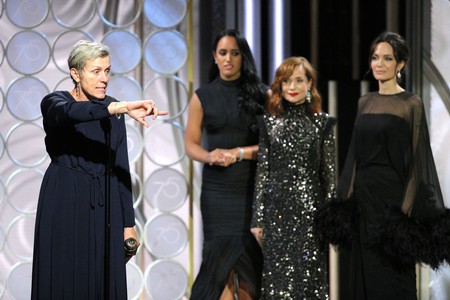 Globes host Seth Meyers made digs at Harvey Weinstein and Kevin Spacey but, after his opening presentation, he wisely stood back to allow women presenters to shape the evening with their speeches. (Meyers’ fake wrangling with Amy Poehler was his one misstep—it was contrived and unamusing.) At times, the awards themselves seemed like an afterthought. On the other hand, this was an exemplary use of a show that has so often seemed like a self-congratulatory Hollywood indulgence.

Will Oscars sustain the momentum?

What will happen at the Oscars? The Globes have thrown down a gauntlet to the traditionally more stately Academy Awards to be as equally polemical on the issues of sexual abuse and harassment. Come Sunday March 4, much will rest on the shoulders of Jimmy Kimmel to set the tone. It will be unforgivable if “Time’s Up’s” momentum is slowed by an Oscar show that strains to be more dignified than angry and passionate.