Traditional Qatari Dishes Everyone Must Try 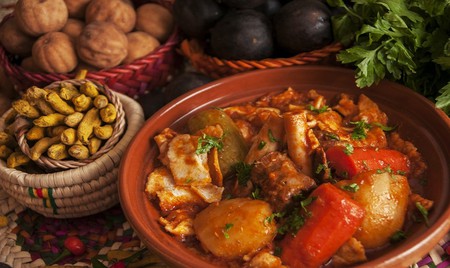 In Qatar, breakfast is usually a light meal that includes yoghurt, cheese, olives and coffee, while lunch is the main meal, with mezze followed by main courses such as lamb or chicken stews. As for dinner, it is usually a light snack, except during Ramadan or special occasions. Overall, the country’s local cuisine is varied, complete with international influences. Here, Culture Trip has made a list of some of the must-try Qatari dishes.

Saloona is basically spicy meat and/or vegetable broth. It usually contains tomatoes, aubergine, carrots and potatoes. People eat it by itself or with rice.

One of the most popular dishes in any Qatari home is machboos, or Kabsa, which is basically rice cooked with delicious spices and any kind of meat – chicken, lamb, shrimp, camel or fish. It looks similar to biryani. 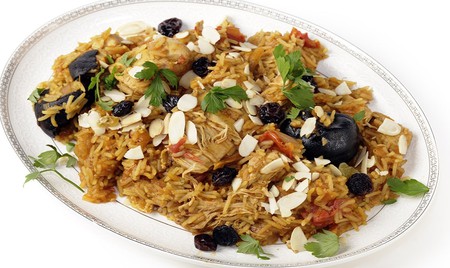 A Ramadan favourite, madhruba, also known as ‘beaten porridge’, is a combination of rice, milk, butter and cardamom that is cooked together until it becomes mushy. Chicken and other types of meat are stewed along with mashed beans.

Usually made during Ramadan for a dessert-filled evening, this dish is a mixture of butter, milk, flour, sugar, saffron and cardamom. These ingredients are used to create little dumplings, which are then deep-fried and dipped in sugar syrup or honey to increase the sweet factor. Soft on the inside and crunchy on the outside, this dish is sure to satisfy your sweet tooth. 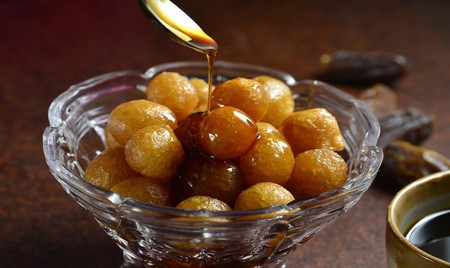 Another Ramadan special and similar to a pot of stew, thareed, often called the Arab lasagna, includes vegetables such as carrots, beans, onions and potatoes cooked with chicken or lamb and mixed with tomato sauce and spices. Bread is placed on the bottom of the dish, soaking up the stew juices and making the bread soft and flavourful.

Kousa mahshi is stuffed zucchini, and it is a favourite all over the Middle East. The zucchini in this international-inspired dish features a stuffing of lamb flavoured with mint and garlic; it is then baked in the oven before being served hot.

Pasta made sweet – this Indian-influenced dish includes fried vermicelli topped with a saffron omelette, making it soft, crunchy, sweet and savoury all at once. People eat it not only for breakfast but also dessert. 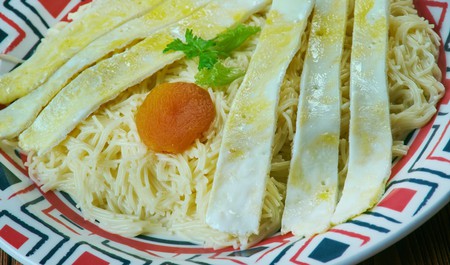 This dish is full of fibre and essential vitamins. It’s usually prepared with zucchini, carrots, eggplant, tomatoes, potatoes and tenderised meat. Thin layers of dough are cut into pieces and boiled in the stock so that it can soak up all the flavour.

Also known as harissa, harees is basically boiled, cracked, or coarsely ground wheat mixed with meat. The consistency varies between a porridge and a dumpling. Harees is also considered to be good for your health because of its nutrient content, and it serves as a great way to break the fast at Iftar during Ramadan. 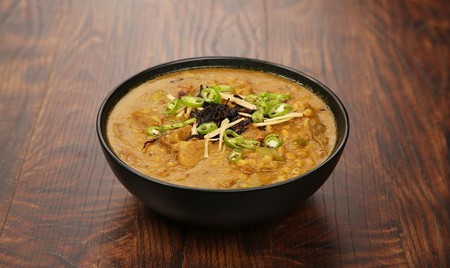 Foul (beans for breakfast), Waraq enab (rice and lamb stuffed in vine leaves), along with appetisers such as hummus, motabel, tabouleh and muhammara are other Arab-influenced foods that have their own variations in Qatar.

Desserts, such as mehalabiya (rose water and pistachio pudding), umm ali (bread pudding with nuts and white raisins), and esh asaraya (cheesecake topped with cream), are also a big part of any Qatari meal. 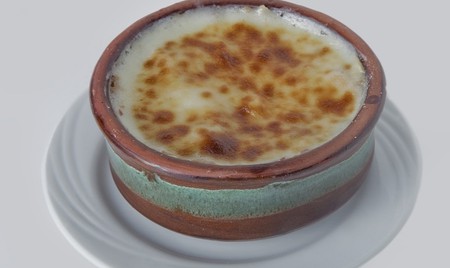