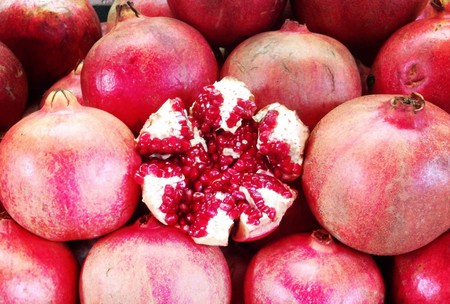 Israel may be small but it has much to offer. Whether it is following the traces of the crusaders in Akko, eating shawarma in Haifa, enjoying Tel Aviv’s lively city life, exploring Jerusalem’s dense history and tradition or enjoying stunning landscapes, there is something for all tastes.

Discover the old town of Akko

The old city of Akko, situated on a peninsula on the coastline north of Haifa, is one of the most fascinating places to breathe in ancient history and the clash of East and West. It is one of the few cities along the shores of the Mediterranean whose surrounding walls are still entirely intact, and strolling around them, you’ll feel the rich heritage of this ancient port city where several religions have left their marks. One of the most beautiful sites in the old town is the Al-Jazzar mosque. Its gorgeous courtyard, old trees, green domes, colourful decorations and dusty rugs lying around evoke ancient splendour and transport visitors instantly back to its glorious past. A visit of the fortress with its halls, courts and tunnels reveals a perspective on the Crusaders’ invasion and makes history come to life. The best way to explore the town is by foot. Small courtyards with painted walls, abandoned buildings and small shops that pop up as you turn the corner will complete the experience. Recommendations for walking tours with various thematic background as well as other useful information can be found on the city’s website. 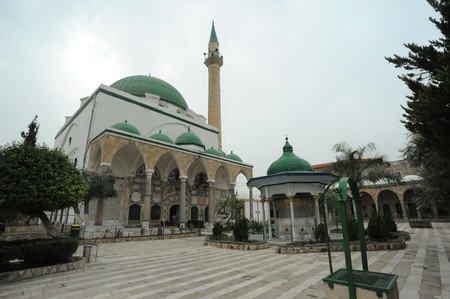 Market, Park
Facebook
Email
Twitter
Pinterest
Copy link
Share
Map View
Haifa may fall a bit behind its two rival cities Tel Aviv and Jerusalem in terms of attractions, but there’s no need to hold back. Situated around two hours north of Tel Aviv, Haifa boasts an impressive port and has been an important arrival point in the early days of immigration to Israel. It’s the main hub for some important technology companies and the mixed population of the city is often cited as an example for the successful coexistence of Jews and Arabs. The city’s main attraction and landmark is the Bahá’í gardens, from which visitors get incredible scenic views on the city and the port at all times of the day. The gardens climb upwards in terraces to the top of Mount Carmel and are a holy site for members of the Baha’i faith, originated in the 19th century in Iran and followed by approximately five million people. Situated just below the gardens lies the charming neighborhood of the German Colony, founded by a German protestant sect in the late 1800s. Fully renovated buildings in light stone with German quotes above the entrances and little adjacent gardens host shops, restaurants and bars.

Haifa is said to be one of the top spots for shawarma in the country and the city center is dotted with delicious street food. Bambino is just one of them to choose from in order to get the full charge of local flavour.
Open In Google Maps
Haifa, Israel
Give us feedback

As counterpart to the buzzling city life of modern Tel Aviv, Jaffa has preserved the true atmosphere of the Middle East as it must have been in earlier days. On top of that, it features some of the most amazing views onto Tel Aviv’s modern skyline. Jaffa is tiny and full of cobbled alleyways leading to a square on a small hill overlooking the Mediterranean and the old port. It is an ideal getaway from the city, easily reachable whether by foot from Florentin or riding by bicycle along the beach. The area around the port has been valorized in recent years and the hangars now host restaurants, art galleries and other venues. Vintage lovers should not miss a stroll through the famous flea market which is held on weekdays. Old men playing cards or gathering together to pray in the middle of wooden furniture and tableware is part of the scenery. Surrounding streets are full of small boutique shops, gorgeous restaurants and bars that will enchant visitors equally. Stop by for a Middle-eastern lunch or a cup of tea at Café Puah to eat and drink in a relaxing and truly vintage-style ambience.

Become an expert on Bauhaus architecture in Tel Aviv 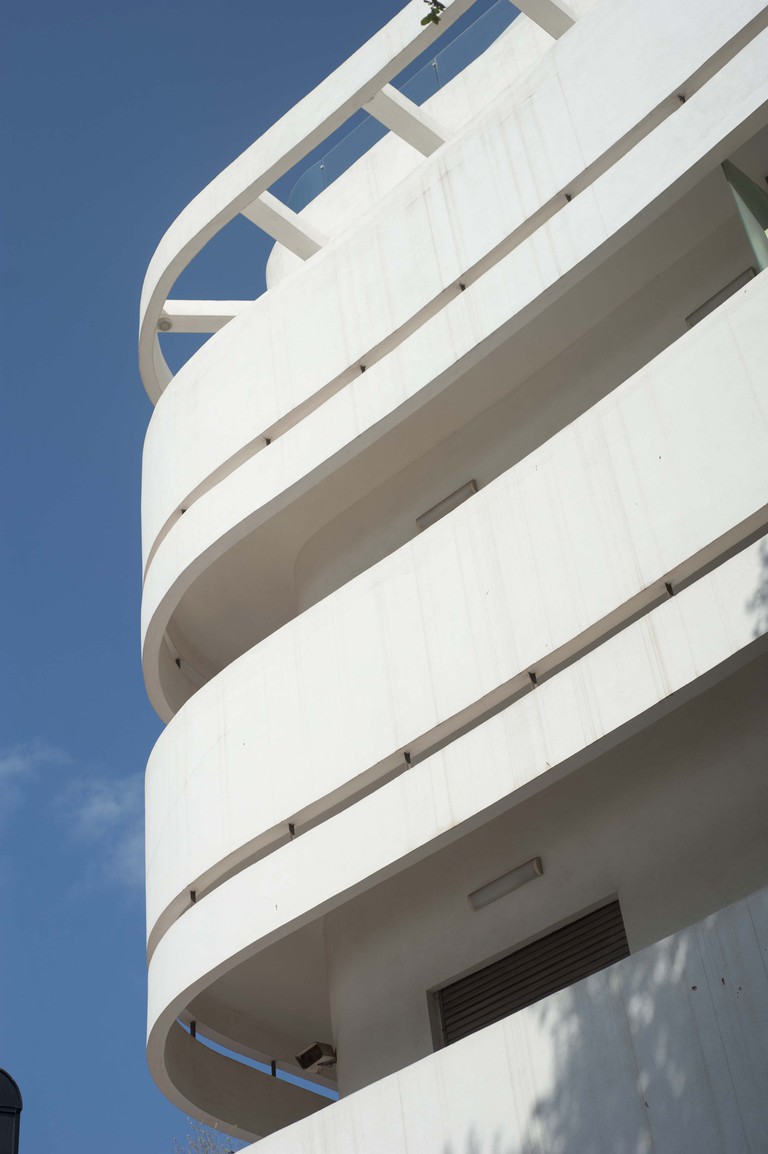 Bauhaus Tel Aviv | © Pia Staigmueller
Tel Aviv is a modern city with more than 100 years of history, and architecture lovers will enjoy the city tour organized by the Bauhaus Center to have a closer look at some of the 4000 buildings of the White City. The tour in English takes place every Friday morning at 10am and starts at the center located in Dizengoff Street. An experienced tour guide will explain architectonic details and the history of some of the most impressive buildings around the area between Dizengoff Square and Gordon Street.
Open In Google Maps
77 Dizengoff Street, Tel Aviv-Yafo, Tel Aviv District, 6433249, Israel
+97235220249
Visit Website
Visit Facebook page
Give us feedback

Jerusalem is a city unique of its kind. There is no place where the coexistence of the religions of Judaism, Christianism and Islam can be experienced in such a deep way. The concentration of historic sites that are holy to the religions is overwhelming. A city walk will send visitors from the Church of the Holy Sepulchre where Christians worship the resurrection of Jesus to the dense tangle of an Arabic souq just by turning around the corner. Viewing The Western Wall, the holiest site of Judaism, and the Dome of the Rock from the rooftop of one of the buildings situated on the hill in front will leave you breathless. The city walls and the gates leading to the heart of the old town are impressive monuments of a centuries-old history. A guided tour may be a good option to get the most out of the city’s rich background. 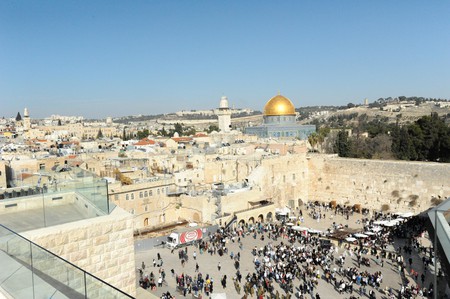 The old city of Jerusalem I | © Pia Staigmueller

Get a full charge of flavours at Jerusalem's Mahane Yehuda Market

Book Now
This famous Jerusalem shuk is bursting with different colours, flavours and visitors alike. The abundance of fresh vegetables, fruits, sweets, spices, baked goods, meat and fish and countless other delicacies is almost too much for the senses. Various food stalls and restaurants inside the covered Machane Yehuda Market have so much to offer that a single visit is not enough and will lead to difficult choices of what to try. There is also the possibility of coming back in the evening when the market is closed but a whole bunch of bars come to life and offer live music, drinks and food in a remarkably unique atmosphere that will stay in mind for a long time. To get a taste of this alternative side of the market and a drink or two, try the unique and inviting food bar May 5th.
Open In Google Maps
Mahane Yehuda Market Jerusalem, Jerusalem District, Israel
Give us feedback

Far away from the countries’ city hubs, in the middle of a barren desert scenery on top of a mountain plateau and overlooking the Dead Sea, Masada is a mystical place. Ruins are left of this ancient site, where almost a thousand Jews made a desperate stand to defend themselves after the Romans conquered Jerusalem in 70 CE and committed suicide to avoid enslavement when they realized that their attempts had failed. Surrounded by steep cliffs and declared a Unesco World Heritage Site in 2001, Masada is one of the highlights of Israel. Visitors can climb up to the summit by foot from the Visitor Centre or take the cable car to get there in just a few minutes. The site is surrounded by steep cliffs and offers breathtaking views as well as lasting impressions of the still visible Roman military encampments that encircle Masada and the ruins of the palaces that Herod the Great had built on top of the flat-topped mountain. 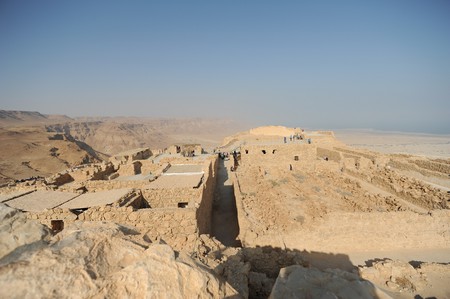 Pia loves different cultures, languages and people and is always looking for new places to discover, to explore and to photograph. Originally from Germany she currently resides in Italy. With her gypsy soul combined with her passion for travelling she asks herself if she will ever settle down.