The Best Israeli LGBT Films You Should Watch 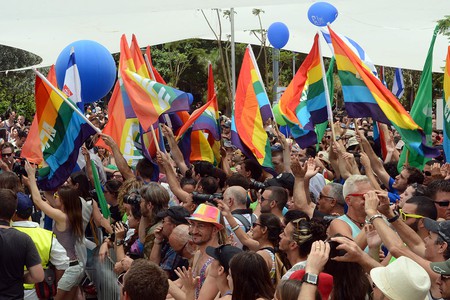 We take a look at the celebrated gay scene in Israel with an eclectic variety of some of the most controversial and celebrated LGBT films written, directed and produced in the country.

Oriented is a fascinating documentary film about three gay Palestinian friends in their 20s living life in Tel Aviv. It was initially released in June 2015 at the Sheffield Documentary Festival, and was directed by Jake Witzenfeld as his feature debut. The film is not only a modern tale of the trials and tribulations of being gay in society, it also documents the difficulties of being gay for Palestinian men and how the issue clashes with Islamic doctrine. The three best friends decide to form a group called ‘Qambuta,’ hoping to bring about change through exposure to their unique sexual and national identities.

Yossi and Jagger was released in 2002 and has since become a cult must-see. Directed by Eytan Fox, this romantic film follows two gay soldiers in the Israeli military as they deal with daily life at the Israel-Lebanon border. Yossi is a commander and is involved in a secret, passionate love affair with his second-in-command (who is nicknamed Jagger). The two often sneak off from the outpost to spend time together. An ambush leaves Jagger wounded, and complications ensue.

Another politically provocative tale, Out in the Dark tells the story of an Israeli lawyer who falls for a Palestinian psychology student. The film was released in 2012 at the International Haifa Film Festival. The film, a directorial debut for Michael Mayer, portrays the political complications of an Israeli falling in love with a Palestinian in the West Bank and the inevitable problems of homosexuality in a conservative Muslim society.

In a different genre from the celebrated Eytan Fox, director of Yossi and Jagger, Cupcakes is a sweet comedy of a group of five friends in Tel Aviv who enter the Eurovision Song Contest as a joke. They are shocked to find out that their entry was accepted. The film follows the LGBT-friendly group as they go forward with the initial joke that is now taken seriously by each member for different personal reasons.

Paper Dolls is a charming documentary following the lives of transgender Filipinos who have come to Israel to work as care-workers for elderly Jewish Orthodox men. The documentary Paper Dolls (in Hebrew Boobot Niyar) was released in 2006 by director Tomer Heymann. The documentary was shot over a long five-year period and was featured in a variety of international film festivals to a positive reception.

A sequel to Eytan Fox’s Yossi and Jagger, the film Yossi follows the title character’s life following his encounter with Jagger ten years earlier. Yossi is a 34-year-old cardiologist trying to cope with his traumatic past and his present. The film was released in 2012 and is Fox’s fifth feature film.