Between the skyscrapers and bustling markets you will come across architectural relics of Tel Aviv’s most elegant era. Bauhaus edifices transformed the young cityscape with unique designs that rose to international fame and became the Middle East’s first White City.

A group of Jewish graduate students from the Bauhaus art school in Germany arrived here in the early 1930s, and over the course of 25 years they built more than 4,000 buildings. Some 110 years later, the White City is an open-air museum and design playground where simplicity and brilliance converge. There are hundreds of Bauhaus buildings still standing in the city; here are 10 of the best.

Architect Pinchas Bizonsky designed this stately seafront residence in 1935 (it’s now facing the Dan Hotel) for Carl and Ella Reisfeld. It was a prestigious address that was home to wealthy families, politicians and ambassadors; in the 1980s, the status of HaYarkon Street declined and many tenants abandoned the building. Design firms Bar Orian and Amnon Bar undertook the task of restoring the original four floors, and added five new levels with a more contemporary exterior and a courtyard in the centre. It is now one of the most expensive and sought-after residences in the city, and also boasts the most expensive penthouse in the whole of Israel. 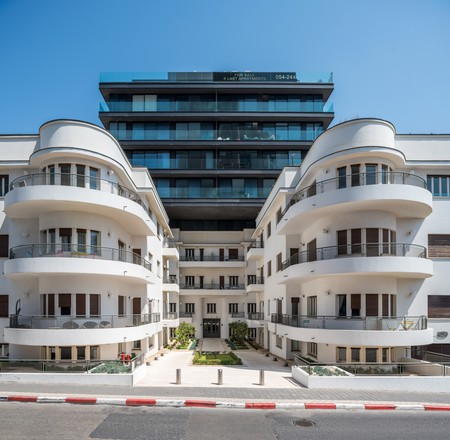 Distinguishable by its impressive staircase and iron railings, Jacobson’s House was designed by Emanuel Halbrecht in 1937, in the area known as Ramat HaSharon, now the Gan HaHashmal neighbourhood. Strategically close to the railway station on Yehuda Halevi Street, Halbrecht’s design incorporated apartments and commercial space, including the Café Raphael patisserie. It was part of a rising trend in mixed-purpose building projects during the 1930s. The white U-shaped building originally featured a rear inner courtyard and three wings, each with a distinct exterior. In 2012, Nitza Metzger-Szmuk led a massive restoration project, adding additional apartments and lifts.

The mind behind this architectural gem is Yehuda Megidovitz, the city’s first official contractor and recognised as the man who built Tel Aviv. He designed the building in 1936 on the north end of the elegant tree-lined square. The building features total design equanimity, and is restrained and strong with sleek lines and long terraces that wrap around the corner to Reines Street, and an internal courtyard and garden that exude subtle elegance. The award-winning restoration project, led by Bar Orian Architects and known as ‘In Dizengoff’, features 26 luxurious apartments, three penthouses and commercial space. 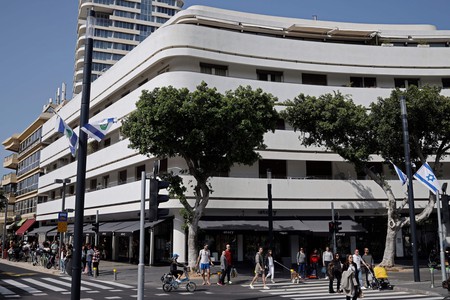 When Dov Karmi drew up the plans for 29 Idelson Street in 1936, little did he know that his project would become home to the White City Centre, with the support of the Tel Aviv municipality and the German government. The residence’s original features included a fish pond, a spacious staircase and sunken balconies. The municipality inherited the building in the 1970s and preservation works began in 2017.

Built in 1933 by renowned German architect Wilhelm Ze’ev Haller, this three-storey house on 3 Strauss Street provided housing for the teacher of the Balfour School, situated opposite. Its narrow facade is juxtaposed with curving terraces, adding depth, while the rest of the structure retains its Modernist qualities: smooth, straight and minimal. In 2004, the building became part of an important neighbourhood restoration and expansion project to include a public square, while Bar Orian Architects preserved the building’s original character by planning two new levels at the rear. Bruno House played another historically important role by providing refuge within its former medical clinic for underground Lehi fighters in the 1940s. 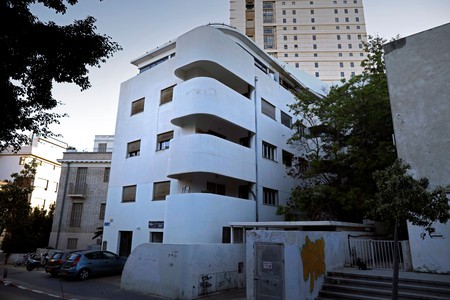 While shared residences were common among wealthy homeowners, others preferred private houses, such as photographer Abraham Soskin’s house on 12 Lilienblum Street. Modest yet distinguished, Zeev Rechter designed this two-storey house in 1933, with two asymmetrical wings and separate entrances to divide the living and working spaces. Deep-set windows provide shade and extended balconies feature signature slits for ventilation and light filtration. Hidden from street view was the artist’s industrial-style photography studio set on three levels. In 2006, Nitza Szmuk Architects restored the home according to historic archives and added three apartments at the back while retaining the original facade.

Designed by Abraham Markusfeld for Eliezer Rubinsky in 1935, the first thing to note about this house, on the corner of Sheinkin Street and Hagilboa Street, is its columns. 84 Rothschild was the first structure to obtain permits for columns, and it is a style that became the standard of modern construction in Israel. The lobby, with its majestic staircase, leads to spacious apartments, while the exterior boasts round windows, awnings and terraces – hallmarks of the International Style – with studs that break Bauhaus rules and a sparkling grated-plaster mineral finish that is typical of its period. In 2006, Amnon Bar Or Architects incorporated a rooftop penthouse and lifts as part of a restoration project. 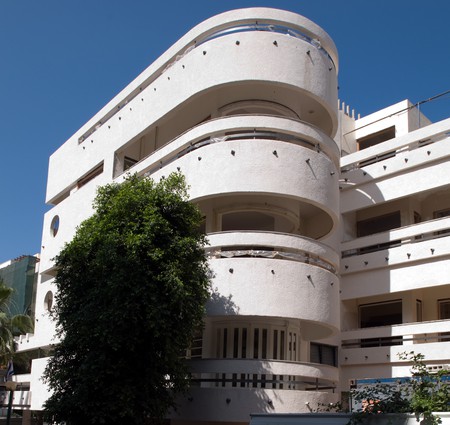 Located on Tel Aviv’s ‘Bauhaus boulevard’, this asymmetrical masterpiece was constructed in 1932 by Salomon Gepstein. The three front apartment blocks are off set from one another, to add dimension to the facade while also considering tenants’ privacy. This design feature breaks the exterior continuity of the buildings along the boulevard and integrates common garden space. The corner windows welcome daylight but feature floating concrete pergolas that provide shade, an addition typical of the International Style. The 2006 preservation plan (Orna Shatil/ODO Architects) included one rooftop apartment, aligned with the original design yet hidden from the boulevard. 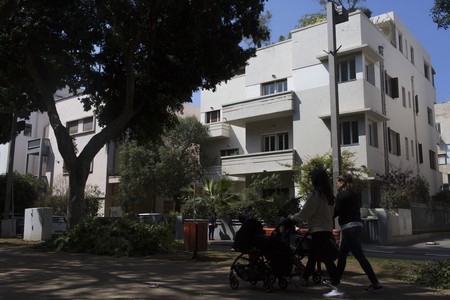 This asymmetrical masterpiece was constructed in 1932 | © Lior Mizrahi / Getty Images

This is an updated version of a story created by Naomi Lubash.