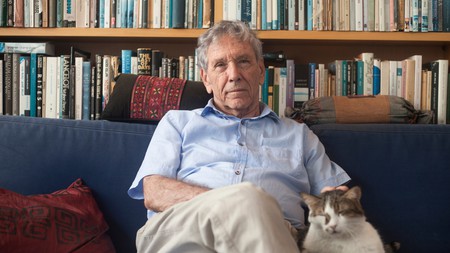 Amos Oz’s body of work reflects on his relationship with his faith, memory and the state of Israel | © Dan Balilty/AP/REX

Contradictions and complexities were the great muses of acclaimed novelist Amos Oz, whose body of work delved into his relationship with his faith, memory and the state of Israel.

When Amos Oz died at the age of 79 in December 2018, Prime Minister Benjamin Netanyahu, often a target for the writer’s disapproval and criticism, was quick to mourn the loss of one of the country’s finest voices, a man who “deftly and emotionally expressed important aspects of the Israeli experience”.

Contradictions and complexities inspired Oz’s work, in both his fiction and non-fiction, something a politician of whatever hue could appreciate. Throughout Oz’s books (more than 35) unfolds the intellectual pursuit of a clear, crisp thinker, one who is able to finely pick apart an argument or belief, no matter how firmly held, then turn everything squarely back on its head and ask, “Ah, but what if…?” 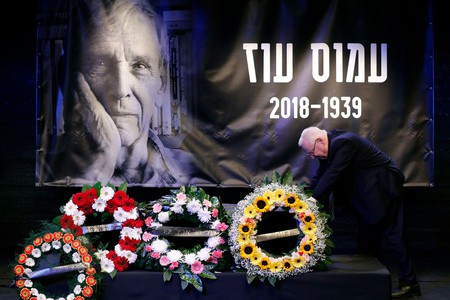 Mandatory Credit: Photo by ABIR SULTAN/EPA-EFE/REX/Shutterstock (10043846f) Israeli President Reuven Rivlin lean on the coffin of Israeli author Amos Oz during a memorial service at the Tzavta Theater in Tel Aviv, Israel, 31 December 2018. Amos Oz, an award-winning Israeli writer, published 40 books in his career and his works have been translated into 45 different languages. Oz died at the age of 79 after suffering from cancer on 28 December 2018. Memorial service for Israeli writer Amos Oz in Tel Aviv, Israel - 31 Dec 2018 | © ABIR SULTAN/EPA-EFE/REX

Born Amos Klausner in Jerusalem, May 1939, he witnessed first-hand the birth of the state of Israel and shared its growing pains. When his mother committed suicide in 1952 at the age of 38, the 12-year-old Amos felt betrayed. He began to question himself, then his father (something of a failed novelist) and then everything and everybody, particularly those in power, both at home and abroad. This ability to step outside a mainstream narrative, but never to be an outsider, never to feel detached from the lives of the people around him, would go on to define his career.

Within just a few years of his mother’s death, he had left home to live on the Kibbutz Hulda in south-central Israel, celebrating his new frontier spirit with a symbolic name change (Oz means “courage” in Hebrew) and reading Anton Chekhov and Miguel de Cervantes under the olive groves. Studying philosophy and literature at the Hebrew University of Jerusalem opened up further possibilities. Always an ardent reader, he now turned his attention to writing as the logical next step. 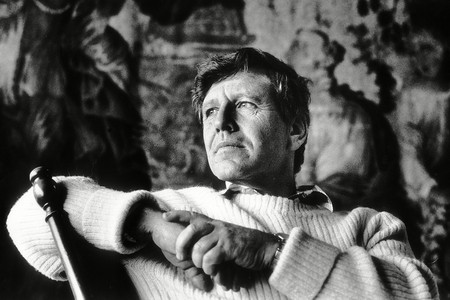 A 1965 debut collection of short stories, Where the Jackals Howl, written like all of his work in modern Hebrew, had its champions, but it was his 1968 novel, My Michael, that brought Oz international recognition. It was the first of his books to be published in English. (His works would be translated into more than 35 languages.)

Those early works chronicled a young nation full of hope and idealism, beautifully capturing the sense of loss and melancholy that underpinned all of that 1950s optimism, and then, increasingly, a mounting anxiety. A Tale of Love and Darkness (first published in Israel in 2002) is widely hailed as his most accomplished book – a memoir that details the everyday turmoil and thrills of his country’s formative years, coupled with the traumas of his mother’s death and demands of a stifling home life, yet still finds humour and humanity aplenty in both.

He spent most of his working life in the Arabah desert close to the Dead Sea, where he would rise at five in the morning, go for a walk and return to his desk and fresh coffee to write. Describing his writing process to The New York Times in 2009, he said, “I start to ask myself: ‘What if I were him? What if I were her? How would I feel? What would I say? How would I react?’” 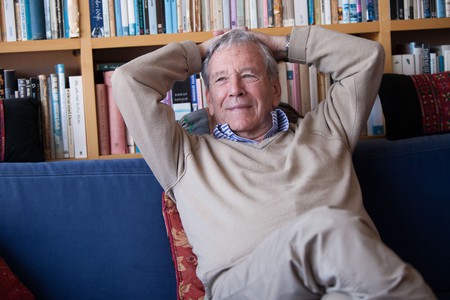 Oz never eased up on his questioning, nor, despite all that he had witnessed, did he lose his belief in people – his great confidence that all of us are capable of boldness, that we have the ability to change our circumstances. His 2017 work Dear Zealots: Letters From a Divided Land is a brilliant, rousing attack on fanaticism and fundamentalism. The trio of essays outline the thoughts of a man who readily fought in two wars to defend his country but always insisted that Israel should map out a progressive pathway for the rest of the region to follow. Oz was one of the first of his countrymen to push for a two-state solution, convinced that a true, lasting peace could only be achieved if Palestinians and Israelis lived as sovereign neighbours.

He was awarded the 2005 Goethe Prize and, in 1997, the French Knight’s Cross of the Légion d’Honneur. Oz was buried at the Kibbutz Hulda, returning to the place that had played such a crucial part in shaping his perspective, his imagination and love for his homeland.

If you’re interested in discovering more authors from Israel, check out our article on 7 Israeli Authors You Should Know About.