Tel Aviv's Head Bakers On The Art Of Bread And Boulangerie 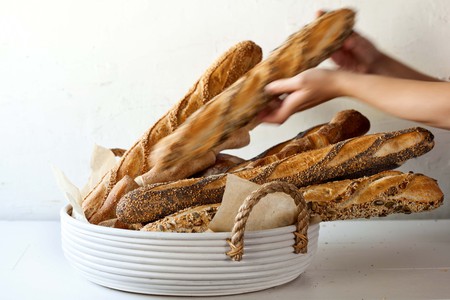 The mouthwatering smell of freshly baked bread wafting out of the on-site bakery is enough to bring anyone into a Tel Aviv café. We sat down with the masterminds who work behind the scenes pulling night shifts and crafting dough recipes, the head bakers of some of the biggest names in the industry: Lehamim, Bread & Co., and R2M’s Bakery. When you enjoy fresh bread so much and as often as Tel Avivian café-goers do, it only seems right to explore the people and the processes creating our beloved staple.

R2M is the brainchild of Mati and Ruti Broudo, who have created an empire of successful and beloved restaurants around the city. With their expansion and growth came the need to have their own bakery to supply all of their eateries. Working and heading the bakery is Oran Kamelgarn, an Israeli who first made his mark on Norway‘s baking scene, where he worked and managed a chain of five bakeries. Kamelgarn has taught in the prestigious Bishulim cooking school and followed his passion for dough and bread craftsmanship to manage the bakery of one the largest culinary and dining corporations in the country. 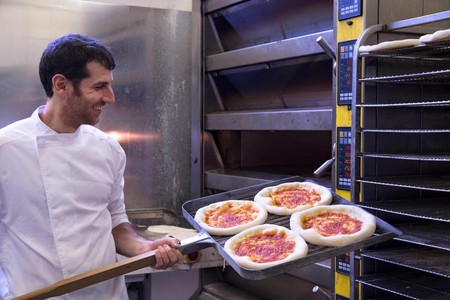 Oran in action | Courtesy of R2M

What brought you into the kitchen?

Before I was a baker, I was a cook – my father had a chain of steakhouses. He was the one who started it. I was always close to it and knew I didn’t want to work in the kitchen because I didn’t like the stress. But 15 years ago, I moved to Gibraltar and worked in my father’s kitchen here and there, working for a computer company to make money. Then moved I moved to France and learned French. I realized I wanted to do something with my hands. So, I worked at good restaurants as a cook and then started studying bakery all over Europe. I moved back to Israel about three years ago and have been ten years a baker, mostly in Europe – in Barcelona, Norway and Paris.
Why did you decide to focus on bread besides anything else?

I was less into dessert and more into restaurants and food, hands-on cooking. I developed a certain style. But who I am; really, my character is very much bread. I can’t explain it; I just get really connected to bread. It’s not just making bread: it’s logistics, thinking ahead and having a baker call you in the middle of the night that the oven is not working and seeing it all through.
How much bread do you make at the bakery for all of R2M’s restaurants?

We make about one ton a day: 5,000 hamburger buns, 500 loaves of bread. But still, with the amount we bake, we try to keep the art in it. We are expanding all the time but make all of our breads manually. We touch every single product with our own hands. We might divide the dough with a machine, but when it comes to shaping, we put our own touch. On Fridays, we bake 700 challah in one day, usually a shift with only two people. This is what this chain is so good about and how it can keep so many chefs who are working for 15 years or 20 years. For Tel Aviv, that’s great. When I became Head Baker, I changed things a little, R2M tastes and tests, and we have a group dialogue about it. But at the end of the day, the bread on the shelves is my creation: we have almost 20 different types of rolls, and out of that, you have 60 types of products.

The craziest is when make around 50,000 sufganiout for Hanukah.
How many bakers work with you at the bakery?

With me, it’s eight. We’re just eight people making all the bread for all the R2M restaurants around Tel Aviv: CoffeeBar, the Brasserie, Hotel Montefiore, the five branches of the Bakery, Rothschild 12 Cafe and Bar and the Delicatessen. 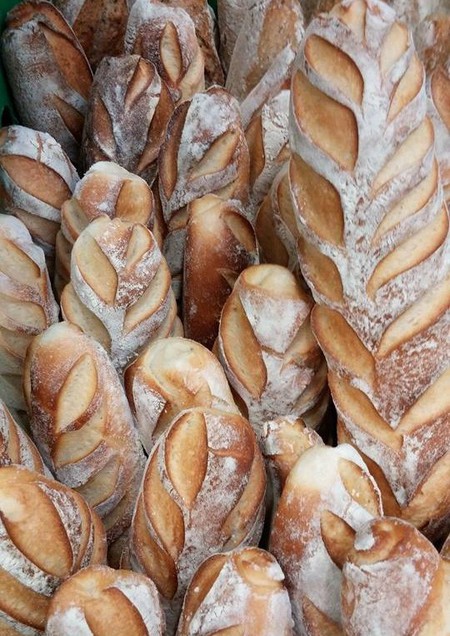 What is your favorite bread, either that you’ve produced or elsewhere?

The Danish bread we make; it’s a big dark loaf of bread. It’s a recipe I brought back from Norway; I developed it a bit and added some stuff that I like. Inside, there is a mixture of sunflower seeds, lots of rye seeds and rye sourdough. It’s heavy and filling but gives you a good feeling of satisfaction after.
Do you eat bread every single day?

I almost don’t, at home. I take a bread home once a week. I do eat bread every day, but not so much. I’m working non-stop and have an adrenaline rush, so I just try it to make sure it’s good. Then, in the afternoon, the team gets food from one of R2M’s restaurants, so it’s hard not to.
What’s your favorite of the R2M restaurants?

CoffeeBar. Since I came to Israel from Europe, I like the restaurants; there’s a lot to criticize and also get ideas from. But every time I eat at CoffeeBar, the style and price that you pay for the reward you get is so right.

Uri Scheft, a passionate baker and pastry chef, is the brains behind the stunning success that is Lehamim, a local bakery dotted all over Tel Aviv that opened in 2002 and recently launched in New York. Scheft is a bread expert, with quite a few published books on the art of baking. Lehamim, his creation, is distinct in character; each store has the bakery in plain sight, with holes in the windows marked ‘the smell of bread,’ enticing passersby. With over 30 different types of bread baked on-site, pastries and sweet treats, the café, store and catering services offer something for any kind of bread lover. Committed to quality and attention to detail, Scheft has worked to bring about a new kind of bakery and bread culture in the city. 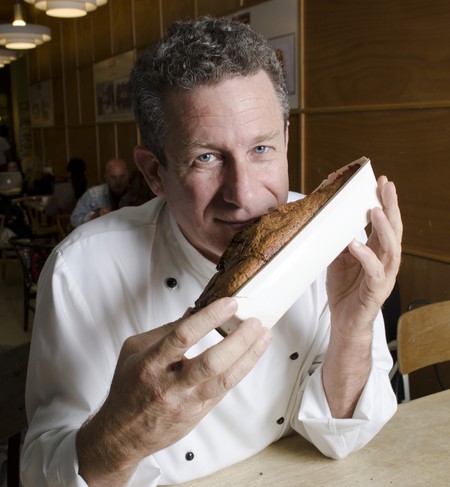 What brought you into the kitchen in the first place?

From early childhood, I was interested and curious in what my mother cooked and baked. As a kid when nobody was home, I played a game where I was the cook, the waiter and the guest. I’ve always loved to cook and feed my family and friends. It got me excited watching people enjoy my food. It feels like I am able to bring them some happiness.
Where did you learn how to bake?

I studied at Ringsted Tekinske Skole baking school, in Copenhagen, Denmark, where I learnt all the basics, and more. Some of the most-known baked goods I specialized in were the Danish rye breads, which I love, and a Marzipan specialty called Kransekage. Aside from that, I’ve takenlots of workshops in Europe, especially in Ecole Le’ Notre in Paris. 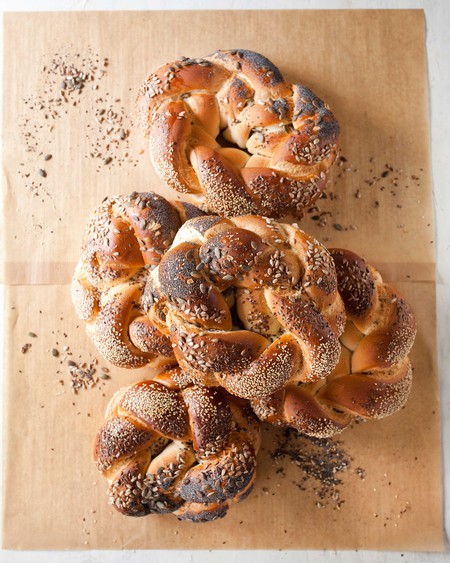 What is the inspiration behind ‘Lehamim’?

The inspiration is every corner bakery you see in Denmark and France, where you make, you bake and sell in the same place. The smell when bread comes out of the oven, it’s still drives me crazy. Also, it’s the love that you start with something, and as it’s changing, the love develops too.
What is your favorite bread, either that you’ve produced or elsewhere?

I been asked this question many times, and the answer is the last one that came out of the oven.
Besides that, I love sourdough country bread; I’ll go and taste it at every single bakery I walk into. There are quite a few bakers that do it really well. But just lately, I tasted Chad Robertson’s sourdough at the Tartin Bakery in San Francisco, and another one I enjoyed was at Mirabelle in Copenhagen that was extraordinary. Rye bread and challah are also on my list of favorite bread.

Head baker and bread specialist Guy Hanuka has worked at countless cafés and bakeries as a bread and pastry baker. Today, he runs the clandestine underground bakery of one of the busiest cafés in Tel Aviv, Bread & Co. Between the regulars, brunch-goers, and the locals coming in to buy all the bread they need at home for the week, Bread & Co. has solidified their spot on the scene. Hanuka works night shifts, sometimes even 30 hours in a row to ensure that the bread that comes out of the oven meets his standards before being sold. 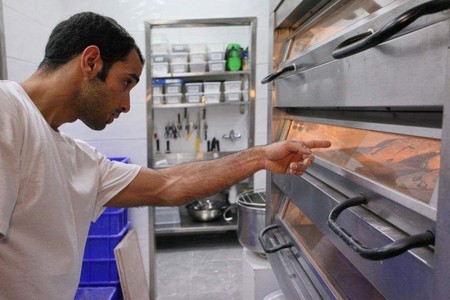 Where did you learn how to bake?

Firstly from apprenticeship: I paid my dues for a year, working night in, night out, 9 pm-7 am night shifts for renowned baker Noam Babila at Bakery 19 and as an apprentice at Oren Bekker’s school. Then I worked with Rami Kredi and launched Bet Lechem. I realized this is what I get the most out of, establishing and launching bakeries from the ground up. Recently, I was brought in to re-do and re-establish the bakery at Bread and Co.
Why bakeries and boulangeries?

It’s addictive – the hours, the different elements of the process, especially the process with the ingredients; from flour, you can take it wherever you want. It’s the basic things that turn into something incredible, something you’re proud of.
What brought you to Bread & Co.?

This is the largest boutique of its kind, and although we produce so much bread every day, there is a detailed and crafty process that takes place. For example, for every sourdough bread we sell, each batch takes three days to make: we make the sourdough a day before, and then the day after make the dough and bake after proofing. For me, working here is about perspective. I’m not a business man; I don’t do it for the money; I get my satisfaction by watching the sunrise at the bakery and seeing the store fill up with my products. It’s a satisfaction that can’t be compared.
Tell us more about the creative process that you love so much.

Everything affects the end result: how much you care for it, every detail of the recipe, how much recipe, every extra second in the oven. The process of bread making is a more, somewhat aggressive, hands-on work than other kitchen work; you can touch it, feel it, try it every step of the way. 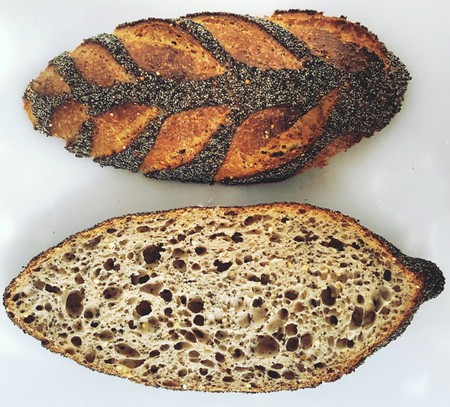 What do you think about the local boutique bakery scene?

In Israel, artisan bread making and bakeries have developed more than we could have imagined: once it was just a market of roadside bourekas baked goods. The recent rise in café culture has made a space for chefs to be more artistic with food. For bakers, there’s a soul in the bread, from the scoring on the crust and measured tastes. Today, it’s not just about eating to survive; it’s a luxury.
What is special about bread in Israel?

Well, it’s a hybrid industry here in Israel; we have a lot of cultures here. Israelis come from Germany, Italy and France. But at the same time, the bread here is very different from the rest of the world; Israelis have taken it to their own place: lots of rye bread, lots of water and white flour. The inspiration comes from everywhere, and today, Israel is considered a superpower of bread, competitively. Buying freshly baked products isn’t about just getting something sweet at the supermarket – it’s about getting something that has been cured and created.