Free Walking Tours in the Non-Stop City of Tel Aviv 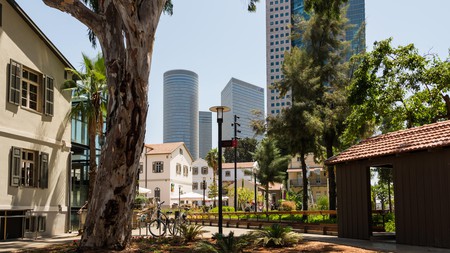 Explore Tel Aviv’s extraordinary history and most famous landmarks by embarking on one of the many guided walking tours the city has to offer.

Tel Aviv offers stunning architectural treasures, like the 4,000 Bauhaus-style buildings in the White City, bustling markets that transform into open air parties at dusk and neighbourhoods with ever-visible links to past empires. To experience what the city has to offer, there are walking tours for every type of visitor to the city.

The Carmel Market Tasting Tour takes place in the city’s largest outdoor market, referred to by the locals as ‘Shuk HaCarmel’. Taking the sites around the Kerem – Tel Aviv’s Yemenite Quarter – the tour explores Israel’s food culture through the market’s history and illustrates how different Middle Eastern cultures have influenced Israeli cuisine. Visitors are introduced to the flavours typical of the region and invited to sample local dishes and tasty bites of homemade bread, falafel in pita and stuffed baklava from the market vendors along the way. 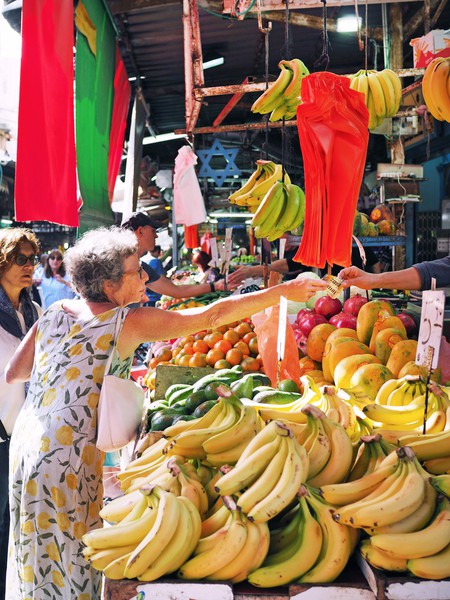 Saunter down the cobbled streets of Neve Tzedek, Tel Aviv’s first Jewish neighbourhood outside of Jaffa. Starting on the southern tip of Rothschild Boulevard, the walk explores the neighbourhood’s principal streets and its transformation from an enclave of charming roads and European-style apartments into one of the city’s most fashionable districts. The tour includes a visit to the Nahum Gutman Museum, a historic landmark in one of the first houses built in Neve Tzedek. The museum displays artwork by Gutman, a Serbian-born painter and sculptor who emigrated to Israel at the age of seven. Many of his sculptures and colourful mosaics are scattered across public spaces in Tel Aviv, including a fountain at the south end of Rothschild Boulevard depicting 4,000 years of Tel Aviv history along with Jaffa’s inclusion in biblical tales. 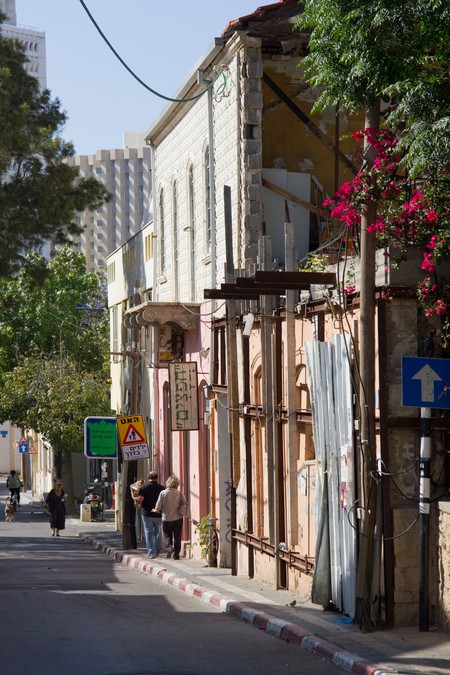 The main streets in Neve Tzedek show the neighbourhood’s transformation from an enclave of charming roads into one of the city’s most fashionable districts | © V. Dorosz / Alamy Stock Photo

Learn about the city’s Bauhaus heritage

The White City tour includes a visit to the many Bauhaus buildings lining Rothschild Boulevard and its surrounding streets. Tel Aviv, also known as the White City for its white facades, was named a UNESCO World Heritage Site in 2003. The 4,000 buildings, designed by the architects who settled in the British Mandate of Palestine in the 1930s after fleeing the spread of Nazism across Europe, are considered the largest group of Bauhaus-style buildings anywhere in the world. The White City tour covers the buildings’ history and traces their origins, construction and restoration and explores their current use as private apartment blocks. 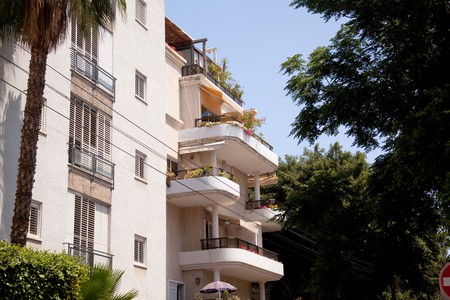 The Best of Tel Aviv Free Tour covers important all must-see attractions and places of interest in the city, sites that have played a significant role in shaping the city. Stops on the tour include the Independence Hall, where Israel’s Declaration of Independence was signed; the Great Synagogue, which began construction in 1922 and was completed in 1926, and explorations of some of the most prominent works of architecture, including the cluster of skyscrapers lining Rothschild Boulevard. 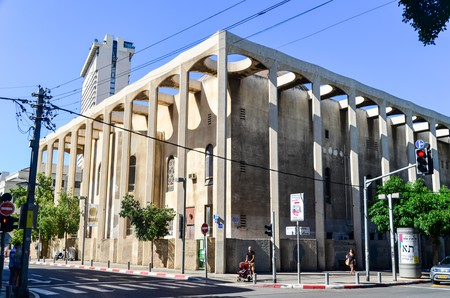 A free walk of Tel Aviv includes the places that played a significant role in shaping the city, such as the Great Synagogue (pictured) | © Mokum images / Alamy Stock Photo

Run 10 kilometres across the city

Fitness enthusiasts can combine culture and exercise on the Tel Aviv Highlights Free Running Tour. Spanning 10km, the guided circuit runs through many places of interest in the city, including Habima Square, the city’s cultural hub, Rabin Square, which houses the city hall building, Sarona Market, a culinary destination inspired by leading worldwide markets, and the beach promenade by the Mediterranean sea. 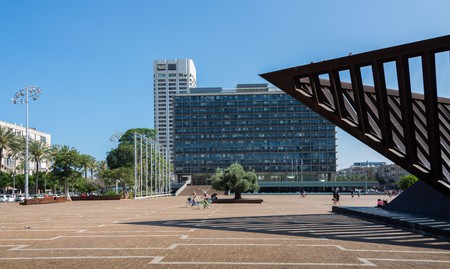 A guided circuit runs through many places of interest in the city, including Rabin Square (pictured), which houses the city hall building | © Lev Tsimbler / Alamy Stock Photo

Immerse yourself in Jaffa’s rich past

Discover the ancient treasures of Jaffa, a port city located south of Tel Aviv, on a two-hour walking tour. The district dates back more than 4,000 years, during which it fell under the rule of a multitude of empires, including the Romans, the Ottomans and the British. The tour includes a visit to Andromeda’s Rock where, according to Greek mythology, Andromeda was sacrificed to the sea monster, and the Jaffa Lighthouse above Jaffa Port, which was built by French engineers during Ottoman rule in 1865 in a bid to improve the port facilities. Though a free tour, tips are expected at the end of the walk. 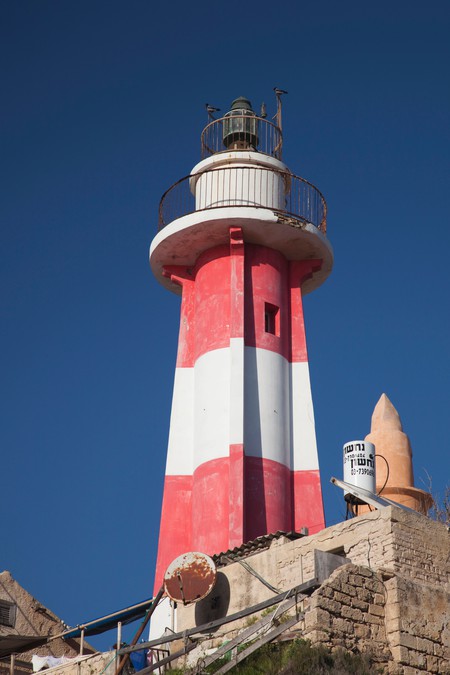 The tour includes a visit to Jaffa’s most recognisable sites, such as the Jaffa Lighthouse (pictured) above the old Port | © Danita Delimont / Alamy Stock Photo

Walk along the Independence Trail

Launched in 2018 to celebrate Israel’s 70th birthday, Tel Aviv’s Independence Trail is a one-kilometre walk that includes 10 historical sites, each marking a chapter in the establishment of the State of Israel in 1948. Inspired by the Freedom Trail in Boston, the path starts with the creation of Tel Aviv in 1909 and ends with the Establishment of Israel in 1948. Memorable stops along the way includes the mosaic of Jaffa’s history by artist Nahum Gutman, the Great Synagogue, the statue of the city’s first mayor, Meir Dizengoff, and his former home and Independence Hall. There are maps available and a self-guided audio-visual tour is available for download on the Independence Trail app (on iOS and Android) and includes free admission to all sites along the route. Tablets are also available to rent (for a small fee) from the information centre opposite Rothschild 11. The path is lit up for guests planning a trip after sunset. 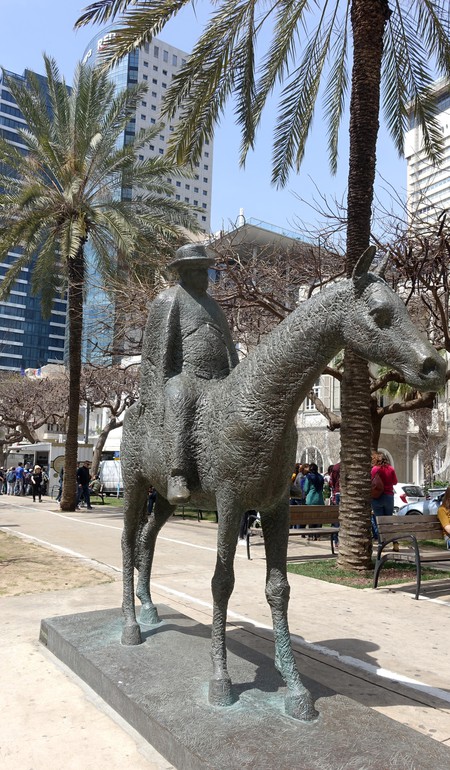 The one-kilometre trail includes 10 stops that mark a chapter in the establishment of the State of Israel in 1948, including the statue of the city’s first mayor, Meir Dizengoff (pictured) | © V. Dorosz / Alamy Stock Photo
Give us feedback